Despite efforts to encourage women to both vote and run in local elections in the West Bank, candidates say much work remains to be done. 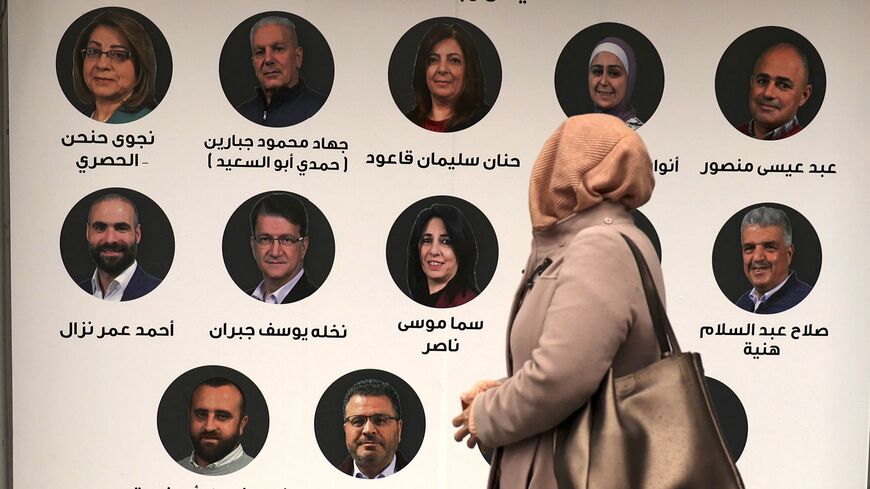 A Palestinian woman walks past an electoral banner for candidates running for the upcoming municipal election in the West Bank city of Ramallah on March 13, 2022. - ABBAS MOMANI/AFP via Getty Images

Rajaa Hamayel submitted her candidacy to the “Al-Bireh Brings Us Together” list running in the second phase of the local (municipal) council elections in the West Bank slated for March 26.

Hamayel, who heads the Palestinian Businesswomen’s Association – Asala, and who also worked as a lecturer at Birzeit University in Ramallah for 14 years, told Al-Monitor that her disappointment with the previous municipal councils prompted her to run in the hopes that things would change. She said that she has things to offer to her city of al-Bireh in the central West Bank.

The second phase of the elections includes 50 local councils in larger cities, such as Karamallah, al-Bireh, Hebron and Nablus. The elections’ first phase, which was held on Dec. 11, 2021, was limited to small towns and villages.

But as the elections draw near, Hamayel seems dissatisfied with the efforts of women’s organizations to support women’s participation in the elections.

“Personally, I received no help from any women’s organization, nor did I witness any attempts to communicate with the female candidates,” she lamented. “I do not see female candidates receiving any support to participate. There is no such thing on the ground.”

Diala Ghattas, a 32-year-old candidate in the “Bethlehem Brings Us Together” list, told Al-Monitor that institutions have not done enough to promote women’s participation in the elections. Some institutions do provide moral but not financial support, and others that only support female candidates in whose orientations they are interested.

Some women’s organizations are at work, said Ghattas, who works as a social researcher, "but greater efforts must be deployed in a patriarchal society like ours.”

One is the project implemented by the Palestinian Working Woman Society for Development in partnership with the Swedish Center Party International Foundation (CIS). Coordinator Samar Hawash told Al-Monitor that this project aims to encourage women to participate in public life, run for office and vote. She said that it also promotes raising the current quota of 20% female candidates to 30% as a step toward full equality.

Hawash said that the association has worked for years on forming women’s shadow councils that helped increase the number of women candidates and voters and helped women access decision-making positions. The association’s programs also aim to monitor the work of local councils from a gender perspective, all the while integrating with the community, she explained.

But as a feminist and human rights movement, she said, they are not satisfied with the current 20% quota.

“Our Palestinian society is not ready to elect women on an equal basis with men," she said. "There is a patriarchal mentality whereby such positions are the preserve of men, and women are still not granted advanced places on lists. Some even replace the pictures and names of women with symbols.”

Hassan Mahariq, the head of the Policy Unit at the Palestinian Initiatives for the Promotion of Global Dialogue and Democracy - Miftah, told Al-Monitor that there are several reasons behind the low participation of women in the elections. Political factors include the absence of a real democratic process in legislative and presidential elections and the marginalizations of some political parties from the main political regime.

Mahariq said that social factors also push women away from the electoral life. “We want the women's quota to reach 30% … so that the voices of the groups they represent are heard,” he said.

For cultural change to happen, he said, "this economy needs to be bigger and give more space to women so they at least engage in the labor market.”