Washington's top diplomat reassured Arab allies and Israel that the US would continue to work with them to confront threats posed by Iran and its proxy militias. 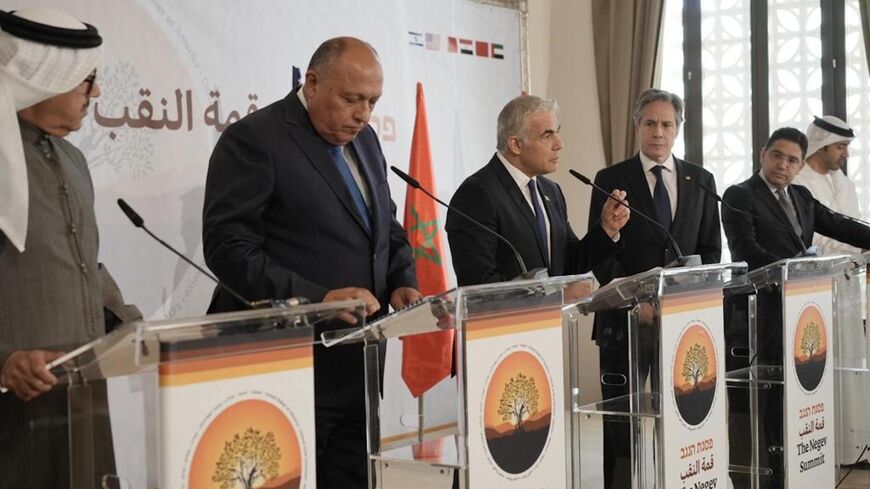 Israel’s Foreign Minister Yair Lapid said today’s Middle East summit would become an annual fixture of dialogue between Israel and Arab states as they seek to build “a new regional architecture” to deter “common enemies,” chief among them Iran.

Lapid met with his counterparts from the United States, the United Arab Emirates, Bahrain, Morocco and Egypt for the forum, which was held in Israel’s southern Negev region.

The ministers from the Emirates, Bahrain, Morocco and Egypt arrived yesterday, meeting with Lapid one on one before the larger group gathering. US Secretary of State Antony Blinken arrived to Israel on Saturday night and met yesterday with Lapid, Prime Minister Naftali Bennett and Defense Minister Benny Gantz.

Blinken reassured Arab representatives and top Israeli officials that the United States would continue to support them as they face security threats posed by Iran and its network of proxy militias across the Middle East.

The top diplomat’s assurances came amid heightened concern that a potentially imminent US return to the 2015 Iran nuclear agreement, coupled with a strategic shift in focus toward Asia and the Pacific, could leave Washington’s partners and allies in the Middle East vulnerable.

Following the summit on Monday, Lapid said that the forum had made history as Israel and Arab states continue “building a new regional architecture based on progress, technology, religious tolerance, security and intelligence cooperation.”

Lapid went on, “This new architecture, the shared capabilities we are building, intimidates and deters our common enemies — first and foremost Iran and its proxies. They certainly have something to fear,” and added, “What will stop them is not hesitation or being conciliatory, but rather determination and strength.”

Lapid’s comments echoed concerns among the leadership in Israel and Arab Gulf states that the Biden administration could soon lift some sanctions on Iran if a deal is reached, leaving Tehran’s Islamic Revolutionary Guard Corps better able to fund its weapons programs and regional proxy militias.

The IRGC has threatened to further strike Israeli intelligence sites in the region following a missile barrage earlier this month on what the expeditionary force said was an Israeli spy base in Iraqi Kurdistan.

Following Blinken’s meeting on Sunday with Gantz, the top diplomat said US-Israeli cooperation on “the great challenges” the two countries share “is better than ever.”

Lapid opened his remarks today with reference to a local terrorist attack yesterday in Hadera in which two Israeli police officers were killed. The attack was claimed by the Islamic State and praised by Hamas and the Palestinian Islamic Jihad.

Lapid said today that Islamist terrorists aim to “make us afraid to meet and to build relationships and agreements between us.”

“They will not succeed,” he added. “We will not let them.”

Lapid also announced that attendees decided on Sunday that the Negev summit would become “a permanent forum.”

“Together with our closest friend, the United States, we are today opening a door before all the peoples of the region, including the Palestinians, and offering them to replace the way of terror and destruction with a shared future of progress and success,” he said.

During his trip to the West Bank on Sunday, Blinken met with Palestinian President Mahmoud Abbas and members of Palestinian civil society in Ramallah to affirm US support for the moribund two-state solution.

The top US diplomat joined Lapid in condemning the Hadera attack, offering condolences to the families of the two young police officers (both only 19) killed in the assault. Previously on Sunday, Blinken had cited the need to “prevent actions on all sides that could raise tensions,” including “settlement expansion” and “settler violence,” comments that touched a raw nerve among some on the Israeli right.

The central focus of Monday’s forum, however, remained the diplomatic breakthroughs between Israel and its Arab neighbors over the past two years under the Abraham Accords.

"Just a few years ago, this gathering would have been impossible to imagine,” Blinken said Monday, noting recent diplomatic visits by top Israeli officials to Bahrain, Egypt and the Emirates. He also noted growing economic ties and solar energy deals, student exchanges and hospitals teaming up on cancer treatments taking place across the region in recent weeks.

“The United States has and will continue to strongly support this process, which is transforming the region and beyond,’’ said the secretary of state, adding that the United States will help widen the circle of countries interested in friendship and peace.

Representatives from Saudi Arabia, which has not signed on to the Abraham Accords, did not attend the summit. Riyadh officials have privately expressed interest in normalizing ties with Israel as other Arab states have, but have cited a lack of progress on the two-state solution as an obstacle.

Jordan's foreign minister also did not attend, though Amman has a peace agreement with Israel since 1994. Jordan's King Abdullah II separately met with Palestinian President Abbas in Ramallah on Monday after meeting with Lapid earlier this month to discuss ways to prevent tensions during Ramadan.

Still, the emerging alignment between Israel and Arab states, spurred in part by Iran’s aggressive tactics in the region, has upended decades of political impasse in which Arab leaders refused to normalize ties with the Jewish state until an acceptable resolution to the Israeli-Palestinian conflict could be reached.

Blinken cautioned that these normalization agreements are no substitute for progress on talks with the Palestinians, adding that the issue that was raised at the meeting on Monday morning. Blinken’s call to renew Israeli-Palestinian talks was echoed by the other foreign ministers.

“The path that we set on 43 years ago is coming to greater fruition,” said Shoukry, in reference to Egypt’s 1979 peace treaty with Israel.

The Egyptian diplomat also said attendees at the summit emphasized the importance of negotiations with the Palestinians and discussed the viability of a two-state solution with east Jerusalem as the Palestinian capital.

Moroccan Foreign Minister Nasser Bourita said that his government’s decision to normalize ties with Israel was “not an opportunistic move but a move of conviction.”

“It’s a natural decision based on longstanding relations between Morocco and Israel, between the kings of Morocco and the Moroccan Jewish community,” Bourita said, noting that the mayors of two towns in the Negev — Dimona and Yeruham — are both of Moroccan origin.