The terror attack in Hadera, the second murderous rampage in days, did not dim the Negev Summit or the commitment of its participants for a regional alliance. 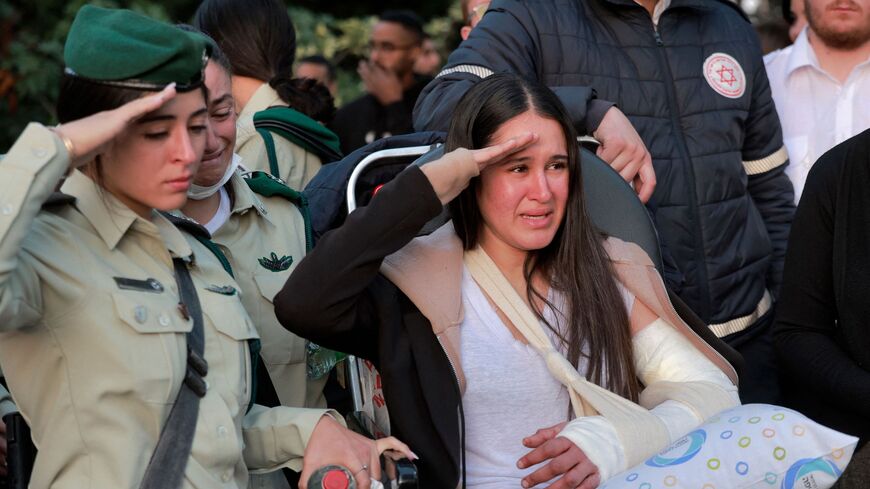 An injured colleague of Israeli border police officer Shirel Aboukrat gives a salute during the latter's funeral in the Mediterranean coastal city of Netanya on March 28, 2022. - MENAHEM KAHANA/AFP via Getty Images

It's a story Israelis are familiar with: Whenever the new Middle East takes shape, the old one emerges to challenge it. The Oslo days of the gay 1990s, heralding a historic reconciliation between Israelis and Palestinians, were quickly marred by the 1995 assassination of Prime Minister Yitzhak Rabin by a Jewish extremist opposed to the peace deal, followed by a long list of Palestinian suicide bombings and stabbings that left hundreds of Israelis dead and maimed. The vision of a new Middle East espoused by one of the architects of the Oslo peace agreements, the late prime minister and President Shimon Peres, was crushed. A quarter century on, Israelis with long memories are experiencing deja vu. Will Islamist terrorism once again undermine a historic peace process between Israel and its Arab and Muslim neighbors in the region?

On March 22, a member of Israel’s Bedouin community and avowed supporter of the Islamic State organization went on a rampage in the southern Negev Desert town of Beersheba, killing four Israelis. Five days later, as the foreign ministers of Israel, the United States, UAE, Bahrain, Morocco and Egypt met at a luxury hotel near the hut that Israel’s first Prime Minister David Ben-Gurion called home, two men embarked on a shooting spree along a busy thoroughfare in the central Israeli town of Hadera. They killed two police officers, grabbed their weapons and wounded at least seven others until being shot dead by undercover police officers who happened to be dining nearby. These killers also turned out to be Israeli citizens affiliated with IS.

And a third attack took place Tuesday in the ultra-Orthodox town of Bnei Brak, in the center of Israel. An assailant shot and killed five civilians. Contrary to the other two incidents, this attack was not carried out by an Arab-Israeli, but rather a 26-year-old Palestinian from Jenin.

The town of Hadera, where the second attack occurred, is barely two hours’ drive from Sde Boker, the southern kibbutz where the summit was taking place, but the simultaneous events were a world apart. Two conflicting cultures are vying for dominance in the Middle East, with Islamist terrorism versus normalization between Israel and several Sunni states in the region inspired by the threat from Iran.

But contrary to the developments that followed the 1993 Oslo Accords, this time the advocates of peace have the upper hand. The Islamic State organization that terrorized the world a few years ago has been vanquished in most arenas. Israel has been combatting terrorism for decades, with much success. The process of rapprochement with its neighbors is reaching capitals throughout the Middle East and North Africa, and appears here to stay.

The host of the Negev Summit, Foreign Minister Yair Lapid, had asked his guests to leave their phones behind as they sat down for dinner, seeking to foster a sense of intimacy. But when one of Lapid’s aides walked in to update him on the Hadera killings, Lapid reported the news to his guests Bahraini Foreign Minister Abdullatif al Zayani, Egypt's Sameh Shoukry, US Secretary of State Antony Blinken, Morocco's Naser Bourita and the United Arab Emirates' Abdullah bin Zayed. Each condemned the attack. “Our presence today is, I think, the best response to such attacks," Morocco’s Bourita said.

Meanwhile, Israel’s Shin Bet domestic security agency is trying to understand how an active IS cell planned an attack under its radar and carried it out in the heart of Israel. Surveillance video shows the two men — cousins, it transpired — arriving at the scene dressed in matching white, one with a Punisher logo on his vest. In the car they parked nearby, police found over 1,000 rounds of ammunition as well as rifles and handguns. The assailants knew where to wait for the bus that discharged the security personnel they sought to kill, and had they not been stopped by attendees of a nearby police event, their rampage could have broken records.

Security officials are concerned about copycat attacks by Palestinians or Israeli Arab extremists, especially given the sensitive timing. The attacks came in the run-up to the annual March 31 Arab Land Day protests against Israeli land expropriations as well as just days before the April 2 start of the holy month of Ramadan, which coincides this year with the Jewish Passover holiday. An Islamic State comeback right now would be a nightmare for the politically vulnerable government of Prime Minister Naftali Bennett.

In their public comments, the ministers avoided the threat from Iran, likely not wishing to feature on Tehran’s radar. Behind closed doors, Iran was reportedly the dominant issue, including the reported US intention to remove the Islamic Revolutionary Guard Corps from its list of terror organizations. Blinken heard quite a few complaints on this issue at Sde Boker. Participants also decided that the Negev Summit would become an annual gathering, each time in a different desert. Blinken even noted that the United States itself has a few deserts to offer, inspiring visions of the next summit in the glittering Mojave Desert town of Las Vegas.

Israel is moving ahead with the formation of a regional alliance underpinned by its technological defense and offense capabilities as the pivot of an anti-Iran axis. Israeli defense industries are inundated with orders, and even Germany has come knocking. A New Middle East is shaping up in spite of it all.