On a first official visit to Morocco, Interior Minister Ayelet Shaked said Israel recognized Morocco’s sovereignty over the Western Sahara, and stated Israel’s intention to enable Moroccans to work in Israel in the construction and nursing sectors. 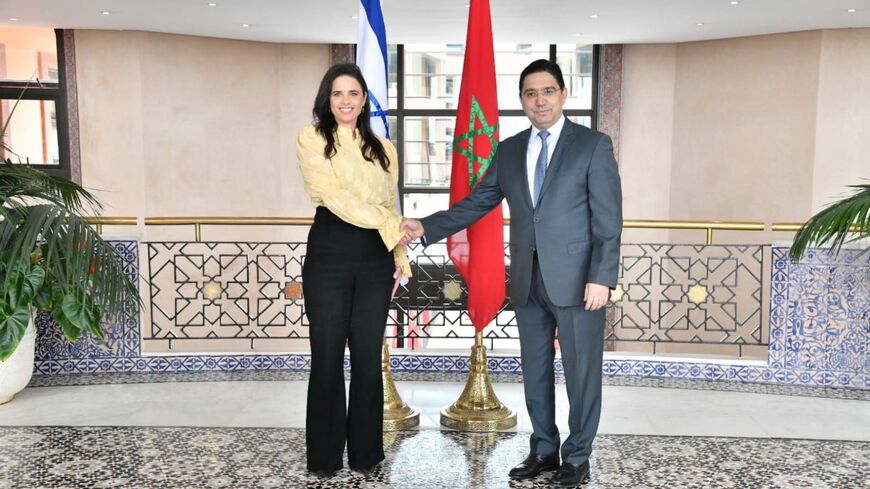 On an official visit to Morocco, Interior Minister Ayelet Shaked said June 21, "Israel supports the sovereignty of Morocco on the Sahara. We talked about the close relationship between the two countries, and also the joint projects that we can do together."

It was the first time that an Israeli minister expressed publicly the country’s support of Moroccan sovereignty over the Western Sahara region, which it has controlled for decades despite the presence of the Polisario Front independence movement.

A statement issued by the interior ministry simply said that in her meeting with Moroccan counterpart Abdelouafi Laftit and Foreign Minister Nasser Bourita, Shaked expressed publicly Israel’s support for Moroccan sovereignty. The statement did not include the exact quote of the minister, and the ministry declined to further comment on the issue.

Foreign Minister Yair Lapid had previously addressed the issue, but in a more general manner. In March, Lapid hosted in the southern Negev region the foreign ministers of the US, Egypt, the United Arab Emirates, Bahrain and Morocco, for a first-of-its-kind meeting.  After his meeting with Bourita  on the sidelines of the Negev summit, Lapid issued a statement saying that the participating countries would work together to counter "attempts to weaken Moroccan sovereignty and territorial integrity."

On the same occasion, Lapid hailed a recent decision by Spain to support Morocco's autonomy plan, saying "We are determined to bring prosperity and peace to this region and beyond. In this context, Spain’s statement last week in support of Morocco’s autonomy plan for the Western Sahara, a plan others have also already endorsed, is a positive development." Israel’s foreign ministry affirmed to Al-Monitor that the March 2022 statement reflected Israel’s official position on the issue.

Israel was forced into the controversial Western Sahara issue when the Trump administration concluded the Abraham Accords with the Emirates, Bahrain and Morocco. As part of the American-brokered deal for Morocco to renew diplomatic ties with Israel, the US agreed to recognize its sovereignty over Western Sahara.

Israel never issued a similar statement. Still, Algeria, which supports the Polisario Front, expressed anger at Israel a few months ago, claiming that Jerusalem was at least partly to blame for the American recognition.

Shaked's visit was the first time an Israeli interior minister traveled officially to Morocco. She also agreed for Israel to bring in Moroccan workers for the construction and nursing sectors. Shaked tweeted after the meeting, "Our goal is to sign the final agreement next month to bring foreign workers from Morocco to Israel. We also talked about the challenges of facing Iran, which both countries share."

In parallel, Ambassador Alon Bar, who heads Israeli foreign ministry’s political strategic division, traveled today to Morocco for a working visit, during which he held a political dialogue with the head of the Middle East division within the Moroccan foreign ministry, Fouad Ahraf.

The statement added that "the dialogue also addressed the regional architecture framework and the follow-up measures agreed upon by the parties at the Negev Summit, held at the initiative of Foreign Minister Yair Lapid in March of this year."

Israel and Morocco renewed diplomatic ties in December 2020.  Ambassador David Govrin — one of Israel’s most experienced and veteran diplomats — serves as Israel’s head of mission. The Israeli diplomatic team in Rabat has been extremely active since the opening of the office in August 2021, assisting Israeli businesspeople, artists, intellectuals and tourists to forge ties with Moroccan counterparts.

When Israel and Morocco renewed ties, analysts claimed Rabat engaged in the Abraham Accords mainly because of the Western Sahara issue, but since then, several senior Moroccan officials had expressed their country’s commitment to normalizing ties with Israel. In fact, cultural and commercial ties are growing rapidly, as is security cooperation.