Israeli ministers of Moroccan origins rejoice over tightening bilateral relations with Israel, multiplying their contacts with ministers in their homeland. 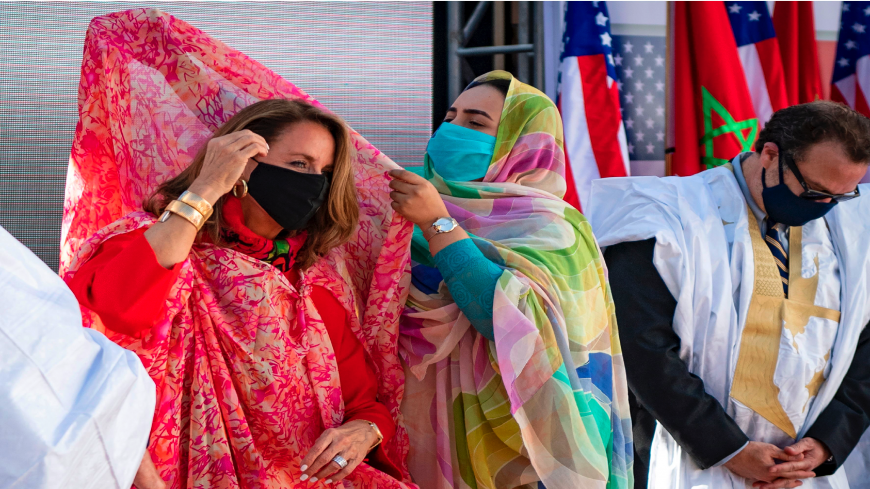 A Moroccan woman places a traditional covering on the head of Jennifer Fischer, wife of US Ambassador in Morocco David T. Fischer, after a meeting with US Assistant Secretary of State for Near Eastern Affairs David Schenker (R) and Morocco's foreign minister in Dakhla, in Morocco-administered Western Sahara, on Jan. 10, 2021. Schenker is visiting contested Western Sahara after Washington recognized Morocco's sovereignty there in exchange for Rabat normalizing ties with Israel. Western Sahara is a disputed and divided former Spanish colony, mostly under Morocco's control, where tensions with the pro-independence Polisario Front have simmered since the 1970s. - FADEL SENNA/AFP via Getty Images

Still, Israel-Morocco relations are not just a matter of diplomacy and diplomats. On Feb. 8, Israel's Minister of Public Security Amir Ohana spoke over the phone with his Moroccan counterpart, Interior Minister Abdelouafi Laftit, in a conversation that was reportedly especially warm and friendly. At the beginning of the conversation, Ohana greeted Laftit in Moroccan Arabic, noting that as a son of Moroccan immigrants, reestablishing bilateral ties is of special significance for him. He had waited many years for this to happen, he said. The two ministers then invited each other to visit their home countries in order to promote cooperation in the field of public security. They agreed to meet in the near future either in Morocco or Israel.

Ohana was certainly not the first Israeli minister to speak on the phone with his Moroccan counterpart. He was not even the first Israeli minister of Moroccan origins to do so. On Jan. 18, Interior Minister Aryeh Deri — who was born in Morocco — spoke on the phone with Laftit. "I have spoken this morning with my colleague, Moroccan Interior Minister Abdelouafi Laftit. We decided to establish a joint team to study the possibility of bringing [Moroccan] foreign workers [to Israel] for the nursing sector and to consider visa exemption. Apart from that, I shared with him memories from my hometown Meknes in Morocco. We exchanged invitations for visits in Israel and Morocco," tweeted Deri.

As a reminder, Israel and Morocco reestablished diplomatic ties on Dec. 10. The agreement was part of a US-brokered deal that includes American recognition of Morocco’s sovereignty over the long-disputed Western Sahara region. In recent years, Rabat had accelerated its diplomatic campaign on this issue. Clearly, the king felt it was a last-minute opportunity to generate a Washington change of policy on that, before the presidential elections.

With Western Sahara in the background, Jerusalem was not sure about Rabat’s commitment to real peace. But moves in recent weeks demonstrate that the king and the government in Rabat are fully engaged in bringing the two peoples closer. This is excellent news for Israel, and not just on the diplomatic level. With tens of thousands of Israelis connected through their families to Morocco, the desire to build bridges is enormous. More so, several Israeli ministers of Moroccan origins consider building bridges to be a personal chore. They are very much excited and proud of that.

Ministers of Moroccan origins reflected this Israeli excitement shortly after the agreement in a series of statements. Strategic Affairs Minister Michael Biton said, “I was born in Israel, but Morocco flows through my veins. Today is a holiday for me. I hope to return to Morocco soon for an official visit — this time as a minister in the Israeli government.” Transportation Minister Miri Regev said, “Generations of Moroccan Jews have dreamed of peace with the country where they were born and where our culture is so deeply rooted. May the blessing of Allah come upon us and upon them.” Then-Economy Minister Amir Peretz posted an especially moving video, greeting Moroccans using the Moroccan Arabic dialect. "As-Salamu Alaykum, my name is Amir Peretz, a minister in the Israeli government, and I am very happy about [the resumption of] diplomatic relations between Morocco and Israel. I was born in Morocco, in Boujad, and I feel like my dream has come true,” said Peretz, adding he wished his Moroccan-born parents were still alive to share with him this special day.

The rapid progress on Israel-Morocco relations stands in sharp contrast to Israel’s lack of relations with Algeria and Tunisia.

Shortly after the agreement with Morocco, Tunisia made it clear it was not going to follow suit. A statement by Tunisia’s Foreign Ministry said, "As Tunisia respects the sovereign positions of other countries, it affirms that its stance is principled, and changes in the international scene will never affect it.”

The issue of Israel came up again in Tunisia a few weeks ago — again in a negative way. In a video posted on Facebook, Tunisian President Kais Saied is heard denouncing in Arabic protests he said were the work of divisive forces. Then he added a phrase that sounded like “the Jews,” or “al yahood.” Tunisian Jews worldwide were quick to condemn the president. In response, Saied denied denigrating Jews in any way. On the other hand, he did repeat his stance against Israel and in favor of the Palestinian cause, making clear that normalizing ties with Israel was certainly not on his agenda.

While President Saied has made his position on Israel crystal clear, there are also other voices in Tunisia. In a Dec. 14 interview, former Tunisian Foreign Minister Ahmed Ounaies argued that Algeria’s public battle against Morocco on Western Sahara is one of the main reasons the kingdom decided to resume diplomatic relations with Israel. “The geopolitical scene in the world and in the region has changed, so Morocco’s choices went in a new direction,” said Ounaies.

Indeed, Israeli diplomats estimate that for Algeria, the Western Sahara issue is a major element in resisting normalization with Israel, perhaps no less than the Palestinian issue. As for Tunisia, a senior diplomat in Jerusalem told Al-Monitor that the likelihood of Tunisia under Saied changing its mind on Israel is practically nil.