The issue of the Vienna talks are sure to be discussed in today's Washington meetings between IDF senior commanders and their American counterparts. 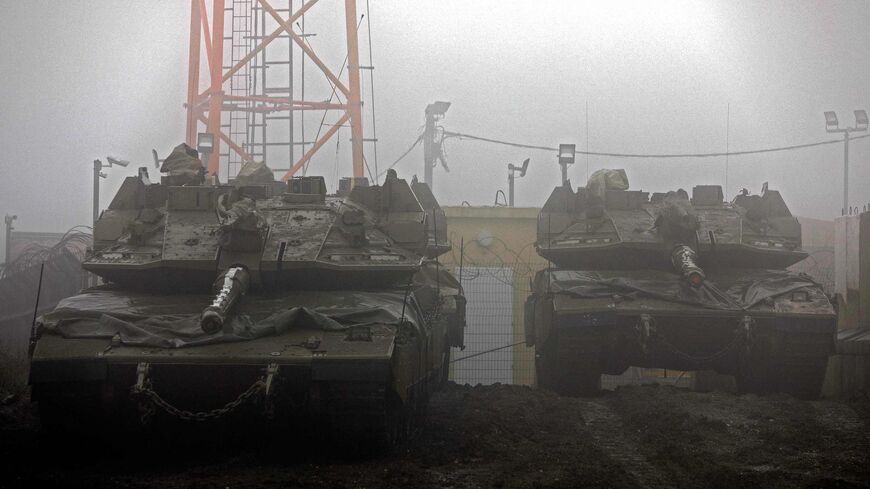 Merkava VI tanks are pictured at an Israeli military post near the Israeli-Syrian border on March 9, 2022, in the Israeli-annexed Golan Heights. - JALAA MAREY/AFP via Getty Images

While it appears that the the Iran nuclear talks in Vienna may be back on track, the United Arab Emirates and Israel are reportedly pressuring the United States to provide them with security guarantees against Iran if a nuclear deal is reached.

Bloomberg claimed yesterday that Jerusalem and Abu Dhabi have been in contact with Washington officials about formulating a defense plan for the region in case a new nuclear agreement is signed. The report explained that while each country spoke with Biden administration officials separately, their position was coordinated ahead of time.

A new nuclear deal with Tehran would probably include removal of sanctions, unblocking Iranian international oil trade and thus replenishing state coffers. Israel and the Emirates fear that with renewed financial means, the Iranian leadership could resume its support of terror activities and proxy groups. Israel and the Emirates would reportedly like to see a defense plan that bolsters missile defenses and intelligence sharing.

Russia’s Foreign Minister Sergey Lavrov said today that his country had received guarantees from the United States on its ability to trade with Tehran as part of ongoing talks to salvage the Iran nuclear deal.

Deputy IDF chief Herzi Halevi, IDF official in charge of Iran matters Tal Kelman and IDF international cooperation commander Effie Defrin arrived in Washington yesterday for talks with their counterparts. Israel’s defense attache to the United States Hidai Zilberman is joining them. The visit was apparently planned quite some time ago. Still, it is expected to focus on the Vienna talks and Iran-related threats to Israel in the region. Halevi and his colleagues are slated to meet with US defense officials at the Pentagon and participate in a strategic defense forum together with US Joint Chiefs of Staff, Central Command and European Command.

Last week, Kelman and IDF chief Aviv Kohavi traveled to Bahrain, where they met with Bahraini state and defense officials and with US military officials at the US Naval Forces Central Command, the US Navy’s Fifth Fleet and Combined Maritime Forces headquarters. Kochavi was quoted as saying during his March 9-10 visit, "In the past year, we have built a network of strategic-security collaborations with various countries in the Middle East that strengthen the strategic advantage over threats in the region."

Addressing yesterday the annual Begin Conference on the Security of the Nation, Defense Minister Benny Gantz invoked Israel’s Opera Operation in 1981 that destroyed the unfinished Iraqi reactor south of Baghdad. Gantz said, "As prime minister, [late Prime Minister Menachem] Begin proved that he was not just a rhetorician but first and foremost a man of action when he ordered an attack on the reactor in Iraq. Today as well, we are facing an enemy who wants to destroy us: Iran. Today as well, we know how to defend ourselves and remove any existential threat."

Gantz added, "This practical approach, which represented both Begin and [late Prime Minister Yitzhak] Rabin, has proven itself time and time again. On security issues, they concentrated on action. Dealing with Iranian aggression now requires political responsibility, prudent conduct and also operational determination rather than political calls from the sidelines."