Top on the agenda is a controversial, long-term partnership pact that critics fear may effectively push the Islamic Republic into becoming a China "colony." 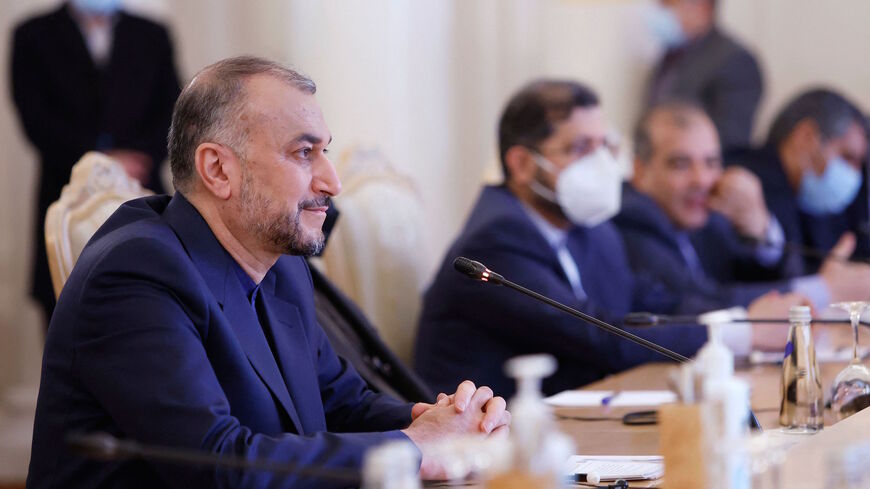 Iran's top diplomat, Foreign Minister Hossein Amir-Abdollahian, headed to the eastern Chinese city of Tunxi on March 29 to join a summit of the foreign ministers of Afghanistan's neighbors.

Apart from China as the host, also in attendance are Russia, Pakistan, Tajikistan, Turkmenistan, Uzbekistan, Qatar and Indonesia. The participants are to discuss the latest in their cooperation amid the shifted political, economic and security structure in Afghanistan, where a lightning-quick Taliban takeover in August overthrew the Western-backed government of former President Mohammad Ashraf Ghani.

But the Iranian foreign minister's agenda, according to the hard-line Tasnim News Agency, is expected to largely focus on the trajectory of the 25-year China-Iran Comprehensive Strategic Partnership.

Amir-Abdollahian has told Iran's state television that he will meet with his Chinese counterpart, Wang Yi, for a review of where the two sides stand in the deal, which he said is already in fast-paced motion with the "outcomes to be seen in the not-distant future."

The deal also played central to another Amir-Abdollahian trip to Beijing earlier this year, where the start of its implementation was hailed by Iran's China ambassador "as one of the key achievements" of the visit.

The partnership deal was signed one year ago by the moderate former Foreign Minister Mohammad Javad Zarif as part of the "look East" foreign policy approach vigorously advanced and encouraged by Supreme Leader Ayatollah Ali Khamenei.

To Khamenei's staunchest loyalists and the hardest-core sectors of the conservative camp, boosting relations with Beijing and Moscow is a vital chance to be seized in what they see as a new world order in the fallout of the Russian invasion of Ukraine.

Hossein Shariatmadari, who has been appointed by the Iranian supreme leader as the editor of the hard-line paper Kayhan, told a meeting in the city of Isfahan earlier in March that Western sanctions against Iran, China and Russia could help the targeted triangle forge a powerful alliance to counter Western influence.

Yet alarm has been relentlessly raised by the Iranian public, pundits and members of parliament that the agreement remains shrouded with a cloud of secrecy.

Unconfirmed details of a framework for a guaranteed sale of Iran's lifeline oil to China, speculation about Chinese military presence, and what is precisely meant by Chinese development projects in Iran's energy-rich southern islands have been particularly called into question, further fueling concerns and confusion.

"It is worse than the JCPOA," declared hard-line former President Mahmoud Ahmadinejad in January, using the acronym for the 2015 Iran nuclear deal between Tehran and the world powers.

Ahmadinejad placed the Iranian government in his crosshairs for bypassing the parliament before striking the deal. "What is disastrous is that in response to questions about their refusal to make it public, they argue that the Chinese side is not happy with the details being released," he complained.