How Erdogan could emerge stronger from war in Ukraine

Senior bureaucrats believe Erdogan will "wipe the opposition off the table" in next year's elections, excelling as he does in every major crisis. 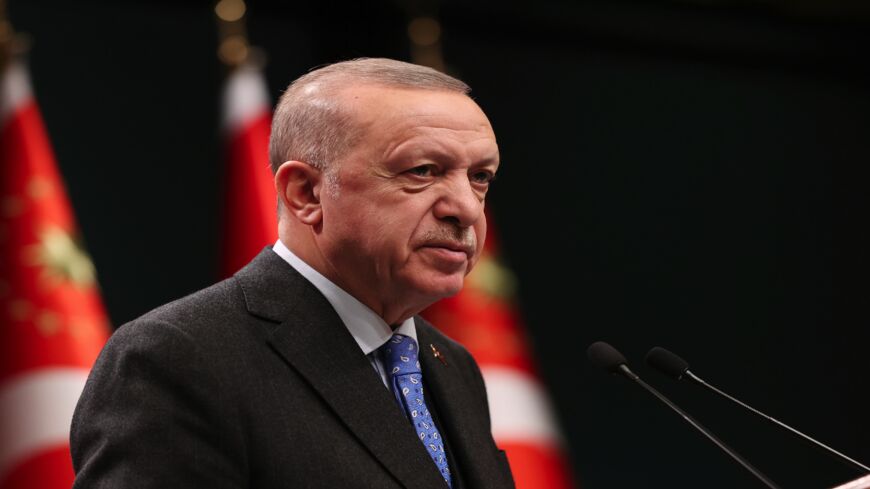 Turkey President Recep Tayyip Erdogan made a statement after the Cabinet meeting with the agenda of Russia and Ukraine on Feb. 28, 2022, in Ankara, Turkey. - Presidential Press Office via Getty Images

With Turkey facing a major economic crisis and presidential elections scheduled for June 2023, President Recep Tayyip Erdogan faces a host of challenges. Yet the Turkish leader is a master of crisis management, and even the Russian invasion of Ukraine could provide unique opportunities.

Turkey pundits are used to hearing conflicting statements from Erdogan’s supporters. For example, with Turkey facing its highest inflation in 20 years, Minister of Finance and Treasury Nureddin Nebati made two different promises about when inflation would peak and when it would go down within the span of weeks. According to his initial prediction, inflation would go down by the summer. Yet later on he moved the time frame to the end of 2022.

Turkish officials' financial predictions are particularly important as rising costs of living and eroding purchasing power are pushing more people in Turkey below the poverty threshold. Yet a denial of facts does not help the ruling Justice and Development Party (AKP). The economic distress directly reflects on Erdogan’s approval ratings. There is little confidence that economic recovery is possible before next year's elections.

Most AKP officials acknowledge the rising cost of living and how this will be the most important issue for the next election campaign. In mid-February, Numan Kurtulmus, deputy chairman of the AKP, told his party’s members that “the AKP is the No. 1 party in polls by a wide margin, but still victory is in the lion's den.” He advised them to canvas door-to-door to maintain their hold on power.

Indeed, for the first time in years, Turkey’s prominent pollsters show a steady decline in AKP support. In the June 2018 elections, the AKP’s vote share was 42.56%; now it ranges in polls between 25-35%. But while the AKP is on a losing streak, it has a solidified base of die-hard supporters.

Yet since the Russian invasion of Ukraine began nearly three weeks ago, there has been a newfound optimism among the AKP ranks. No one can deny that the invasion will cost Turkey, as it will lead to revenue losses from tourism to agriculture.

However, AKP elites also see this as a God-sent opportunity to sweep the 2023 elections.

One senior bureaucrat told Al-Monitor on the condition of anonymity, “From every crisis — including the 2008 recession, the Dec. 17-25 attacks, the July 15 coup attempt, you name it — Erdogan has managed to come out with fine colors, sometimes even with a stronger grip on the political institutions. Now he is on a charm offensive, hosting leaders from Greece to Israel to the UAE. We are confident that we will wipe the opposition off the table for good in the 2023 elections.”

It is not just those associated with the AKP who can see opportunities for Erdogan in this crisis. One can explain three prominent reasons for this optimism.

First are the security vulnerabilities that will snowball due to the war and Erdogan's ability to blame the worsening economy on the regional turmoil.

Levent Gultekin, a prominent political analyst and author, told Al-Monitor that alongside the economic shock, "The war on Ukraine will create a security concern. The public will now worry about the possibilities of the spread of this conflict. When publics worry about their national security, they also start yearning for strong leadership. So, I can see that the increasing fear and unease added with a divided opposition can easily benefit the incumbent. In addition, the national security concerns could cloud judgment on economic despair and blur the focus on accountability. The weak economy will be accepted as due to war, and the reality of the government-made economic vulnerabilities will be invisible.”

The second reason is the war will detract attention from the crackdown on the country’s political opposition. With regards to controlling the opposition, the government has gradually cracked down on opponents, particularly the pro-Kurdish Peoples’ Democratic Party (HDP). Several party members, including its former co-chair, Selahattin Demirtas, remain behind bars.

Fair media representation stands as another factor. Most of the country’s media outlets are effectively under the control of the government.

Seren Selvin Korkmaz, a political analyst and executive director of IstanPol Institute, told Al-Monitor that the “visibility of opposition parties in the press is already low, and with war going on in the region their voices will be heard even less.”

On Feb. 28, the country’s six opposition parties revealed their roadmap outlining their plans to reinstate the parliamentary system and to strengthen the country’s democracy. The gathering did not generate much excitement among the public, with Turks' attention focused sharply on Ukraine.

Furthermore, the AKP and its de-facto political ally, the ultranationalist MHP, have introduced a new election law that, according to government critics, aims to change the electoral rules and regulations to enhance incumbency advantage.

The third explanation comes from international and regional opportunities. Erdogan’s rekindled diplomatic activism might generate a critical degree of economic and political support that could help him make up for the absence of corrective mechanisms in domestic politics, particularly concerning the health of the Turkish economy.

Erdogan appears as the safer bet simply because the alternatives are unfamiliar. Ankara has made it clear that it will not join the global sanctions against Russia. Istanbul is on the fast track to becoming a hub for Russia’s rich and well-educated exiles.

However, not everyone is as optimistic as AKP elites that the June 2023 presidential and parliamentary elections can be saved by the war.

Aykan Erdemir, senior director of the Turkey program at the FDD, told Al-Monitor, “The Turkish economy’s structural problems and the country’s widespread poverty are too extensive to be fixed by window-dressing measures on the diplomatic front. The lack of any economic or political reform domestically to accompany Erdogan’s diplomatic initiatives internationally shows that the Turkish president has not really had any meaningful change in his ideological convictions that bankrupted his authoritarian project at home and abroad in the first place.”