Can Erdogan pull up his sagging support?

Unlike previous polls that suggest steady decrease for Erdogan and his ruling party, a recent poll shows the tide may have been turned. 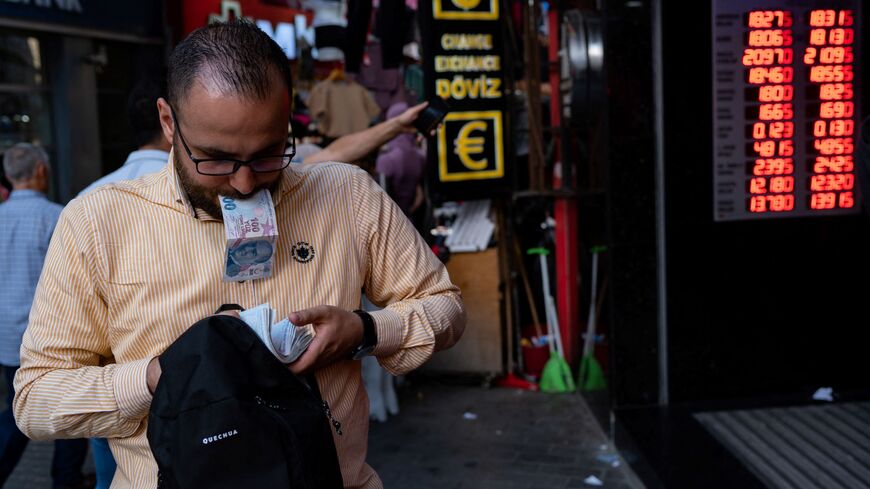 A customer holds Turkish lira banknotes outside a currency changer on a street in Istanbul on Sept. 6, 2022, ahead of one of the toughest elections of President Recep Tayyip Erdogan's rule. - YASIN AKGUL/AFP via Getty Images

Turkey is facing one of its worst financial crises, yet a majority of Turkey’s President Recep Tayyip Erdogan supporters still revere him.

Surveys by prominent Turkish pollster Metropoll Research shows approval rating for Erdogan’s management of the economy increased by 16 percentage points, from 20% in April to 36%. The number of those who believed that the economy was managed poorly also fell by 15 percentage points to 62%. Among those who said they voted for the ruling party in the last elections in 2018, meanwhile, some 68% believed that the economy was being managed well, up some 33 percentage points. Among supporters of the ruling Justice and Development Party’s de facto political ally, the Nationalist Movement Party, the poll shows the figure standing at some 78%.

Analysts and observers believe that Erdogan’s new economic gestures bestowed on various segments of the society, including affordable housing projects and wage hikes, have likely been the main driver behind the increasing support.

“The Justice and Development Party (AKP) is no longer battling inflation. Their focus is on limiting unemployment and keeping the salaries high,” Burak Bilgehan Ozpek, a political science professor at Ankara’s TOBB University, told Al-Monitor. That is why the minimum wage rose about 90% in the past nine months, he said, and another raise is expected in January. "This is not a sustainable policy but one that is essential to prevent dissolution of the AKP."

Ozpek also pointed at the cash influx that Turkey secured through swap agreements with foreign central banks to help slow down, at least to some extent, the devaluation of the Turkish lira

Seren Selvin Korkmaz, a political analyst and the executive director of Istanbul based think tank IstanPol Institute, agrees that Erdogan and his party could reverse their sagging support by “providing temporary relief and promises of further economic recovery.”

Korkmaz also stressed that the AKP government’s former economic success could still be effective for some AKP voters. “Retrospective voting may apply to a group of voters, who still believe Erdogan has commanded a healthy economy before and he can recover this one also,” she said.

Erdogan’s antagonizing rhetoric blaming foreign powers for the country’s financial and economic problems also seems to be working in his efforts to consolidate his support base. Korkmaz suggeted, “They may strongly believe ‘only Erdogan can save us.’”

National security issues, including Turkey’s ongoing military operations in Syria and Iraq against the outlawed Kurdish militants, could also come in handy. “Erdogan is likely to prioritize a national security-focused campaign, where identity politics and fearmongering might work to rally the base around him,” Korkmaz opined.

Also, Turkey’s main opposition bloc, which comprises six parties, has yet to name a joint candidate, with only eight months to go to the elections.

What the polls really reflect, Korkmaz said, is "the government’s excellence in managing the public perceptions that the AKP is winning. The government will not lose on its own. The opposition needs to work full force to win.”