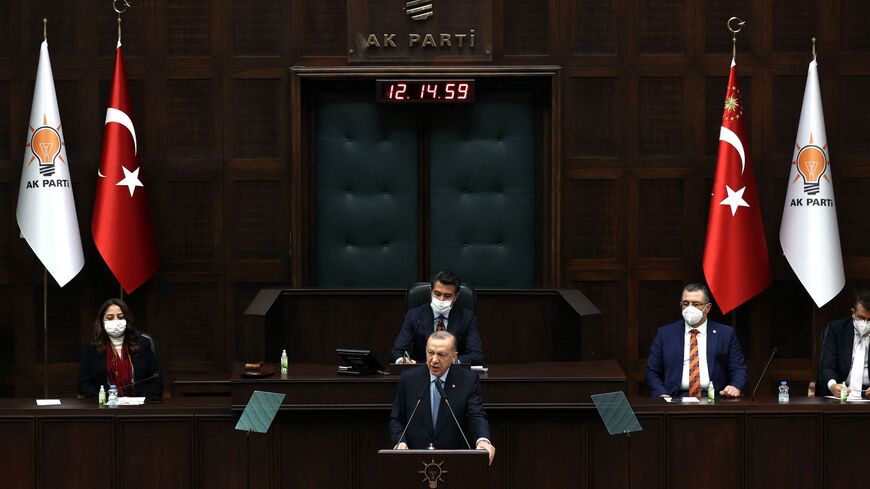 Turkish President and leader of the Justice and Development Party Recep Tayyip Erdogan (C) delivers a speech during his party's group meeting at the Turkish Grand National Assembly in Ankara on Jan. 12, 2022. - ADEM ALTAN/AFP via Getty Images

In-house rifts within the ranks of Turkey's ruling Justice and Development Party (AKP) often grab headlines in the Turkish press, yet these reported rifts hardly transpire into an exodus from the party despite the country’s crippling economic problems and growing public discontent. Experts and political analysts attribute this loyalty to several factors.

The major factor seems to be the AKP’s success in maintaining its strong support base despite the astronomical price hikes and swiftly diminishing purchasing power. While several polls suggest a steady erosion in the party's popular support, many polls still show the AKP as the leading party with its voter share ranging between 27% to 36%.

Religious orders have gained significant influence among society and in government institutions under the AKP’s some two-decades-old rule, with government critics arguing that some ministries are controlled by various orders.

Second, Baskan argued that President Recep Tayyip Erdogan and his ruling AKP still uphold the support of the rural population in some parts of the country, arguing that many families in rural areas receive “government support — financial and other kinds." Turkey’s rural population roughly makes up 7% of the total, according to data released by Turkey’s official statistical institute in 2021 — a significant ratio as the poll suggests a close race in the upcoming elections scheduled for June 2023. Yet Erdogan’s and the AKP’s support in Turkey’s predominantly Kurdish southeast significantly diminished after the draconian government crackdown on the country's largest minority over the past years.

Politicians from the ruling party and their de facto nationalist ally Nationalist Movement Party “do not just live on their salaries. They also influence the political economy of the cities that they represent. They have a say on the tenders, zoning arrangements and municipalities' spendings,” Ozpek told Al-Monitor. “So being a ruling party lawmaker also means being a part of an arrangement where you can take a slice of the profits. Quitting the AKP would mean losing this source.”

While several of its senior members, most notably former AKP Premier Ahmet Davutoglu and Ali Babacan, a deputy premier under Erdogan’s rule, have parted ways with the ruling party, these members seem to be forced out of the AKP after being sidelined by Turkey’s Erdogan. The Democracy and Progress Party (DEVA) founded by Babacan and the Future Party founded by Davutoglu aim to appeal to conservative voters — the main support base of the AKP. Yet the total of both parties’ vote shares fail to reach 4%, recent polls show. Support for the Islamist Felicity Party, meanwhile, ranges between 1% to 3%. This, in turn, indicates a lack of alternatives for potential AKP defectors.

“Where do these people go?” Ozpek asked, adding that DEVA and Future “cannot be an alternative to the government.”

The nationalist Good Party, which enjoys larger public support, meanwhile might avoid accepting potential AKP defectors amid an abundance of corruption claims against the politicians, Ozpek noted. “The Good Party could only accept clean lawmakers whose names have not been tainted. So they cannot join the Good Party if they leave the AKP with a scandal. That ties them down."

Seren Selvin Korkmaz, executive director of the Istanbul-based think tank IstanPol Institute, also underscored the corruption claims. “It means they are partners in what may be considered illicit activities so leaving the party is not that easy,” she told Al-Monitor. “Even if the boat they are in is taking in water, they still do not jump the ship because there is nowhere better they can go. The elites are still feeling secure in the ship, still thinking they can survive this wave."