Thirty four years after Saddam Hussein's Baath regime launched a chemical attack on the city, resident's of Halabja feel they have been forgotten by Iraqi and Kurdish authorities. 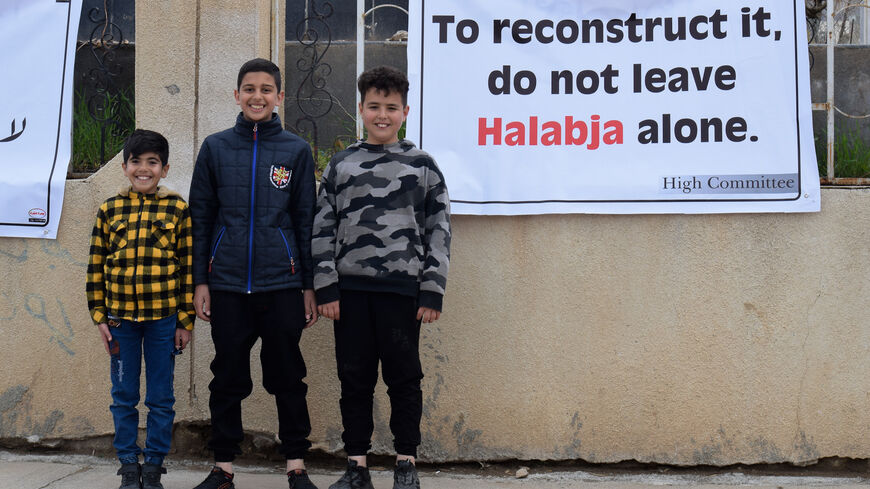 Children stand next to a sign reading "To reconstruct it, do not leave Halabja alone" by the Martyrs' Cemetery in Halabja on March 16, 2022. - Winthrop Rodgers/Metrography

HALABJA, Iraq — Snow flurries fell in Halabja on a cold and subdued day of remembrance, marking 34 years since the chemical attack perpetrated by Saddam Hussein’s Baath Regime. The city’s citizens usually come out in force to honor the victims of the genocide against the Kurdish people, but most stayed at home this year. They boycotted events organized by the Kurdistan Regional Government (KRG), a sign of anger at Kurdish and Iraqi politicians who pay what they consider lip service to them on the anniversary and then fail to live up to their promises.

“We have given sacrifices, so we should have our needs met. We shouldn’t still have to demand the basics. That includes medical treatment and a normal life like any other people who have never made any sacrifices,” Luqman Abdulqadir, head of the Halabja Chemical Victims’ Society, told Al-Monitor in an interview.

“Yes, this year was different. After 34 years, the victims voiced their complaints,” he added.

The memory of the Halabja genocide is still fresh for many residents, but Halabja is also a young city: Many of the children attending the event organized by the Victims’ Society were decades away from being born when Halabja’s name rang out around the world in horror.

By all accounts, March 16, 1988, was a beautiful spring day in Halabja as they often are around Newroz, the Kurdish new year. Iraqi warplanes began dropping shells on civilian neighborhoods without warning, releasing noxious clouds of mustard gas and nerve agents likely including tabun, sarin and VX. Survivors reported smelling an aroma reminiscent of apples before people around them began convulsing and dying where they stood.

An estimated 5,000 people perished in the massacre. Thousands more were injured and bear lasting effects from their exposure to the chemical weapons, plagued by vision and breathing problems and neurological disorders. Many survivors suffer from severe psychological trauma.

In the hours and days after the attack, thousands of people from the surrounding area fled across the Iranian border as the Iraqi army moved in and razed whole sections of the city, rendering it largely unlivable for those who stayed behind. The chemical weapons severely contaminated the soil. 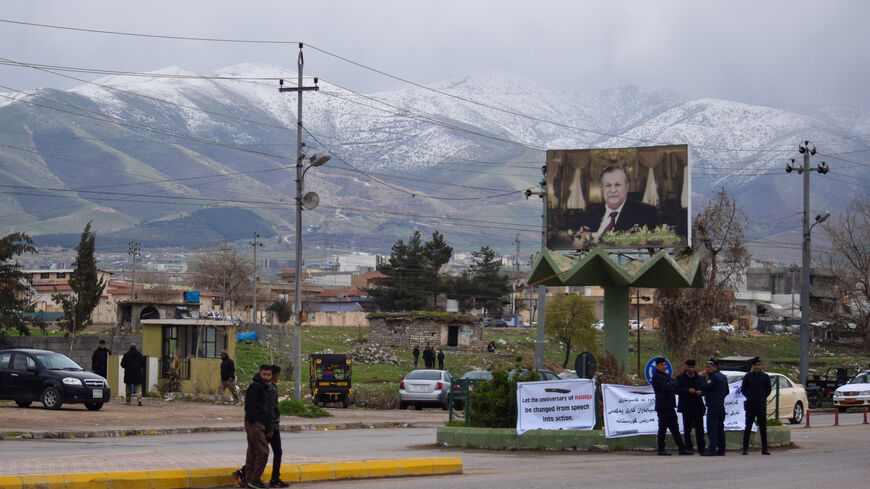 A sign reading "Let the Anniversary of Halabja be changed from speech into action" hangs beneath a poster of late Patriotic Union of Kurdistan leader Jalal Talabani in Halabja on March 16, 2022. (Winthrop Rodgers/Metrography)

Three decades on, the atmosphere on the anniversary is usually a mix of somber commemoration and a festive spring day out for families dressed in traditional Kurdish clothing. But this year it reflected growing political and social discontent across the Kurdistan Region.

“These are all people who had to continue to live after 1988 and they did and they survived, and surviving is not only surviving 1988: It’s surviving all of the other things that happened after that,” said Dastan Jasim, a doctoral fellow at the German Institute for Global and Area Studies, listing the Kurdish uprising in 1991, the “dual embargo” sanctions regime during the 1990s, the Kurdish civil war, the upheaval of the 2003 US invasion, the recent war against the Islamic State and the KRG's economic dysfunction as examples.

Halabja Mayor Nuxsha Nasih told Al-Monitor that “the people of this governorate are victims and have suffered a lot. They are tired. It is time for them to rest, be served and provided with more services.”

Popular frustration for a lack of services is now often expressed at the leaders of the ruling Kurdistan Democratic Party (KDP) and the Patriotic Union of Kurdistan (PUK).

Harsh class and geographic divisions insulate elites in their enclaves in the cities of Erbil and Sulaimaniyah from the lived experience of those in poor urban neighborhoods and provincial towns like Halabja, where electricity and water services are unreliable, the roads are bad, the youth are unemployed, the KRG cannot pay its employees, and food and gasoline are increasingly unaffordable in a place sitting atop a sea of oil. Protests are often brutally put down, and journalists and activists are targeted by the authorities in what the UN has called a “pattern of repression.”

“There has been no investment,” Jasim said. “There is no possibility to make a career, to make a living. … I'm driving through the city and I'm thinking, as a young person, what would I do here?”

Local media recently reported that at least 698 families and 1,100 youth have emigrated from the Halabja area over the past three years, most headed on the dangerous path to Europe.

This year only a smattering of people gathered to watch officials and foreign diplomats lay flowers at the commemoration sponsored by the KRG at the Martyrs’ Cemetery, usually a major part of the day’s events. Instead, the largest crowd gathered at the Halabja Monument for a ceremony organized by the Victims’ Society.

There was also a protest in the city’s bazaar, held specifically to give voice to anger toward the Kurdistan Region’s political leadership of both the KDP and PUK,  “you left us alone, you left us no hope,” one speaker noted.

Arian Taugozi, a member of the Iraqi parliament for the opposition New Generation Movement, attended the protest and told Al-Monitor that the protesters had “very simple and basic demands: better roads, better hospitals, better education, some employment opportunities for the youth. It’s not impossible.”

Nasih said she understood her constituents’ anger, arguing that the KRG “has neglected Halabja.”

“But it is not too late. The KRG can do better work, implement better projects and complete the administrative measures related to Halabja becoming a federal governorate,” she added.

This is hardly the first time the people of Halabja have expressed their discontent. In 2006, protesters burned the Halabja Monument to the ground after members of the security forces fired their weapons into the air trying to break up a rally against the alleged theft by officials of funds donated to the victims. When demonstrations occur in the Kurdistan Region, Halabjais regularly take to the streets, including in recent student protests and a major protest wave in Sulaimaniyah in 2020.

None of the major Kurdish or Iraqi political leaders made it to Halabja this year to hear the locals’ demands, opting instead to hold forth on social media. KRG Prime Minister Masrour Barzani called Halabja “an unforgotten wound” in a tweet accompanied by a slickly produced video. Deputy Prime Minister Qubad Talabani offered up a well-worn promise on Facebook to pursue reparations for the victims from the federal government. Ousted PUK co-leader Lahur Sheikh Jangi made an appearance at the Victims’ Society event in an opportunistic effort to shore up grassroots support for a potential comeback. In Baghdad, Iraqi Prime Minister Mustafa al-Kadhimi and parliament speaker Mohammed al-Halbusi endorsed the stalled effort to make Halabja Iraq’s 19th governorate. But in the streets, their words meant little.

“I hope this stand we have taken can be a turning point,” Abdulqadir said. “I hope our decision not to participate can make KRG, Iraqi and city officials review and reconsider themselves.”