The Russia war on Ukraine took a toll on the Gaza Strip, where the vulnerable population is facing increasing hardships in securing basic necessities as a result of soaring prices, in addition to halting construction projects due to high prices of building materials. 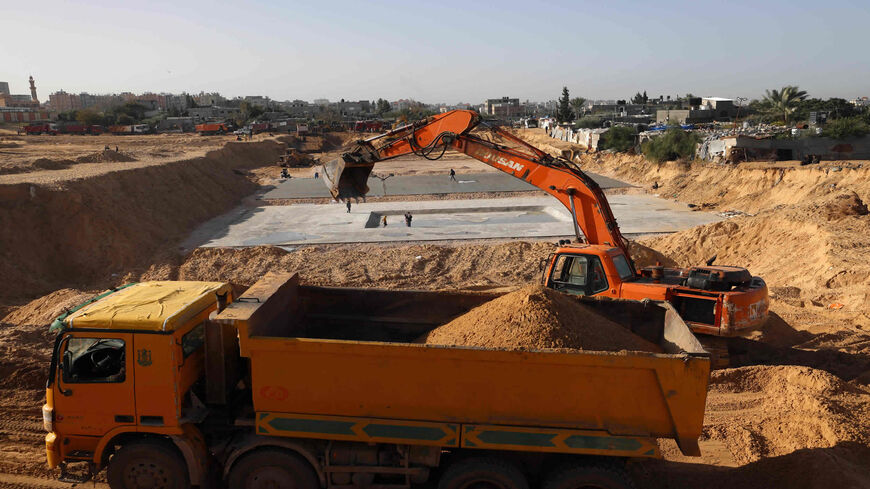 GAZA CITY, Gaza Strip — Since the outbreak of the Russian war on Ukraine Feb. 24, Palestinians in the Gaza Strip have been affected by the crisis’ repercussions, which negatively reflected on the population’s living conditions, especially the poor and the most vulnerable. They have been affected by the soaring prices of some basic foodstuffs, such as wheat, cooking oil, sugar and some types of legumes.

Gaza imports wheat from Russia through Israel, and large quantities of vegetable oil from Ukraine. According to experts in the Ministry of Economy in the Gaza Strip, the current wheat stock in the coastal enclave would last for only two months.

Meanwhile, cooking oil started to run out on the local market, while the prices of available items increased significantly. These foodstuffs are considered indispensable basic products, especially for the poor.

The United Nations Relief and Works Agency for Palestine Refugees in the Near East (UNRWA) estimates that 80% of the 2 million people in Gaza — most of whom are refugees — do not have any food security and depend on relief and financial aid. Many organizations, however, recently cut down on relief assistance because of a decrease in external funding, which affected thousands of Gazan families.

The situation of poor citizens in the Gaza Strip has exacerbated as the month of Ramadan is drawing nearer. Expenses and consumptions have risen in an unprecedented manner, despite the fact that this is a month of fasting for Muslims, which means fewer hours of eating and drinking. Yet spending rates during Ramadan are higher than other periods of the year, as households purchase more food supplies to use when they break their fast after sunset.

Raafat al-Hindi, a father of nine, told Al-Monitor, “I have been really suffering to make ends meet since the outbreak of the war in Ukraine, which resulted in a surge in prices of basic commodities, not to mention that some items are no longer available on the local market.”

He said, “Should things stay the same without any solution in the offing, families will suffer greatly and children could die of starvation, especially if UNRWA and other organizations could no longer provide aid in the coming months should the war drag on.”

Subha al-Maghrabi, spokesman for the High Commission for the Rights of the Poor in Gaza, told Al-Monitor, “The living situation for the vulnerable people is getting worse as they bear the brunt of the repercussions of the ongoing war. This is not to mention the lack of job opportunities for family breadwinners.”

“The volatile economic situation and the struggle to secure basic needs could lead to family disintegration, which could also result in higher rates of crime and divorce,” he noted. "This has actually been the case in Gaza, as the security authorities reported murders as a result of extreme poverty.”

Maghrabi added, “Things are likely to exacerbate in the coming days, with the lack of products and soaring prices. More than 50% of basic foodstuffs in Gaza are imported from European countries, which could witness interruption in shipping and sea freight should the war continue.”

In the same vein, the Egyptian reconstruction projects in the Gaza Strip, which began in the aftermath of the last Israeli war on Gaza in May 2021, also came to a halt.

The Egyptian government has recently announced the suspension of construction works inside Gaza, due to the rise in iron and cement prices. Egypt also stopped the supply of raw materials to the Gaza Strip.

Egyptian President Abdel Fattah al-Sisi had offered a $500 million grant for the reconstruction of Gaza in the wake of the last Israeli war on the coastal enclave, which included building housing units in different areas.

A few months ago, Egyptian companies began working on the construction of several housing projects in the Gaza Strip, in addition to developing rundown streets.

The Gaza Strip has been witnessing a sharp decline in cement and building material stocks, given the Egyptian restriction on its exports to Gaza. Egyptian cement imports to the besieged enclave have dropped by 70% since March 10, prompting a hike in prices, according to a source in the know on the import of construction materials to the Gaza Strip.

Cement prices have increased by 40% and iron by 35%, while many construction projects came to a halt.

Gaza imports many goods from Egypt, which increased after agreements between Cairo and Hamas.

Talks on the political level have recently intensified between the two sides in a bid to find a solution to ease the restrictions imposed on the entry of construction materials to Gaza, resume the already very slow reconstruction process and avoid a catastrophic scenario in the cash-strapped enclave.

Osama Kuhail, head of the Palestinian Contractors Union in the Gaza Strip, told Al-Monitor, “The Russian war on Ukraine has greatly affected the reconstruction process in Gaza, which was affected by the decline in raw material supplies and the rise in prices in the region.”

“There are some 250 contracting companies in the Gaza Strip, which incurred huge financial losses due to the high prices of building materials and restrictions on imports. Many international projects have stopped, resulting in delays in delivery, which the owners of these companies will bear the losses for,” he said.

Kuhail added, “Egypt’s political decision to stop importing raw construction materials will worsen the economic situation in Gaza, because the construction sector is one of the most active economic sectors in the enclave, providing jobs for nearly 30,000 workers. It is difficult for Gaza to secure another source of imports given the high costs of transportation and shipping to the Gaza Strip.”