Egypt and Sudan continue to build on their military relations amid rising tensions with Ethiopia with the approaching third filling phase of the Grand Ethiopian Renaissance Dam despite the negotiations halt. 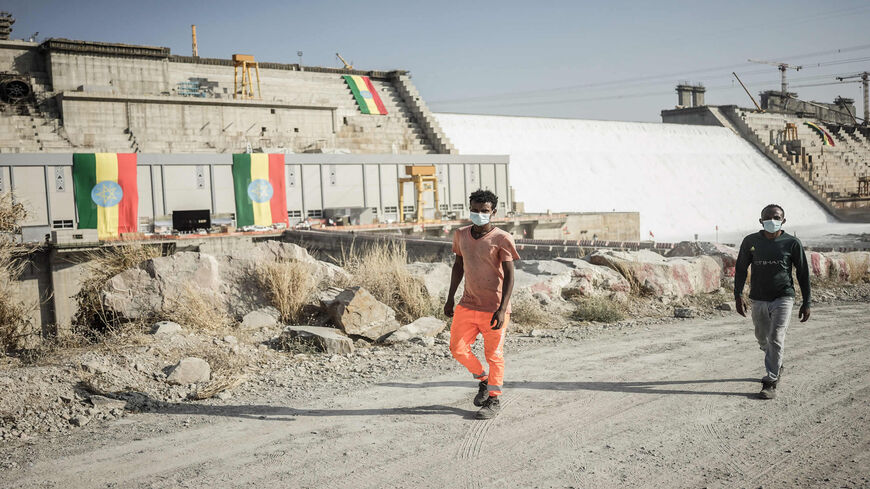 Workers are seen at the site of the Grand Ethiopian Renaissance Dam in Guba, Ethiopia, Feb. 19, 2022. - Amanuel Sileshi/AFP via Getty Images

Egypt and Sudan held high-level military talks recently amid mounting tensions with Ethiopia over its giant hydroelectric dam on the Blue Nile, the main tributary of the Nile River.

The two generals and their delegations discussed boosting military cooperation, joint training and exchanging experiences, according to a statement by the Egyptian army.

Askar praised the converging visions between Egypt and Sudan, saying that he looks forward to more cooperation in all fields within the framework of the strong strategic bilateral relations. He noted that the two delegations agreed to work on preserving both countries’ security and stability.

The Egyptian army statement quoted Hussein as confirming the depth of the historical relations between the two countries. Othman said that he agreed with his Egyptian counterpart on formulating a joint strategy to achieve the interests of both countries.

The visit comes as Ethiopia began draining the middle passage of the Grand Ethiopian Renaissance Dam (GERD), according to recent satellite images, in a move asserting Addis Ababa’s intention to execute ramping works in the dam’s body in the lead-up to the third filling process.

The dam's reservoir is filled during the rainy season, from June to September. The annual storage level depends on the height of the middle passage of the dam.

Relations between Sudan and Egypt, who are at loggerheads with Ethiopia over its construction of the GERD, have grown in an unprecedented manner recently, especially at the military level, since the overthrow of former Sudanese President Omar al-Bashir in 2019. The army chiefs of the two countries exchanged several visits that later culminated in the signing of a joint military agreement in the fields of training and border security in March 2021.

The two armies had conducted joint military ground and air exercises in May 2021, dubbed "Homat El-Nile" ("Guardians of the Nile"). These exercises followed other joint air exercises called “Nile Eagles” that took place in November 2020 and April 2021.

David Shinn, former US ambassador to Ethiopia, told Al-Monitor that the military talks held in Cairo involving Sudan and Egypt cover a variety of issues, including relations with Ethiopia.

“The goal of these talks [is] to give the impression they [Egypt and Sudan] intend to put more pressure on the government in Addis Ababa,” he said.

The military cooperation between Egypt and Sudan stirred the ire of Ethiopia, which sees them as indirect warning messages over the GERD crisis.

Further complicating the current scene, Ethiopia announced Feb. 20 the GERD’s partial operation through limited electricity generation for the first time, in a move condemned by the two downstream countries.

Egypt and Sudan bashed Ethiopia’s unilateral filling and operation of the dam, labeling the start of power generation a violation of the Declaration of Principles signed by the three countries in 2015. The agreement prohibits the three signatories from taking unilateral measures in the use of the Nile River's water.

Despite the GERD crisis recently waning international momentum amid the West’s preoccupation with the Russian-Ukrainian war, the conflict is likely to resurface to the international spotlight with the kickoff of the third filling phase if this step is completed unilaterally by Ethiopia.

Ethiopian State Minister of Foreign Affairs Redwan Hussein said in an interview with Al-Hadath TV Feb. 10, “The completion of the dam cannot be stopped. We will move forward regardless of the position of the downstream countries and their illogical objections. No one can obstruct the project and we shall not compromise on our rights.”

Shinn pointed out that the GERD continues to pose a threat to the security of the region, especially if there are several consecutive years of serious drought that diminish water flow throughout the Nile River system.

However, he believes that the military cooperation between Egypt and Sudan will not reach further than it is now.

On July 19, 2021, Ethiopia had announced the completion of the second filling of the dam’s reservoir with a capacity of 13.5 billion cubic meters, in addition to the 4.9 billion cubic meters stored in the first filling in July 2020. Egypt and Sudan rejected these two unilateral steps.

Ethiopia’s measure came months after a diplomatic escalation that culminated in veiled Egyptian warnings to carry out military action against the dam, if development of the GERD proceeded with agreement among the three parties.

Despite few indicators of any imminent Egyptian military action toward the dam in the recent period, diplomatic statements exchanged between the two countries, Cairo has never waivered regarding the urgency of the crisis,

Egypt has been fostering its influence in the Nile Basin countries  bordering Ethiopiam in addition to deepeneing miltiary ties with Egypt.

Diplomatically, in the summer of 2021, Cairo and Khartoum succeeded in including the dam issue on the agenda of the United Nations Security Council, despite Ethiopia's rejection. Subsequently, the Security Council president issued a statement calling on the three countries to continue their talks under the auspices of the African Union (AU), which has since sought to resume negotiations, but failed.

Talks held under the auspices of the AU since June 2020 have failed to reach a tripartite agreement on the filling and operation of the dam. Cairo and Khartoum demanded Addis Ababa to stop filling the dam's reservoir until an agreement is reached.

The tripartite negotiations have been frozen since early April 2021, when the parties failed to achieve any progress during their meeting in Kinshasa, the capital of the Democratic Republic of the Congo. They rather exchanged accusations of obstructing the talks.

Shinn said, “Ethiopia has completed the first two fillings of the GERD without any harm to Sudan or Egypt. If the rainy season in the Nile Basin is again normal or better than normal, the downstream countries need not fear any harm this year either.”

Ethiopia argues that the dam — the largest in Africa — whose construction is more than 80% complete at a cost of $5 billion, is vital for its economic development and for providing energy. Egypt, for its part, sees it as a serious threat to its supplies of the Nile water, which depends almost entirely on it to meet its fresh water needs.

Sudan has a slightly different opinion. It believes the dam could regulate the distribution of the Blue Nile water and allow it to benefit from the electricity it would generate. However, it wants guarantees of its safe and appropriate operation in order to preserve its own dams, including the Roseires Dam, the largest of Sudan’s dams.

Cairo may have take stepped back from military threats for now, keeping the emphasis on diplomacy. A heavy rainy season in the past two years has mitigated any significant impact on its water supply. However, the Egyptian government still faces internal pressures to deal with the GERD crisis as a national security issue.