Efforts to crack down on corruption in Iraq have resulted in improvement but much remains to be done, especially among forces tasked with protecting the population. 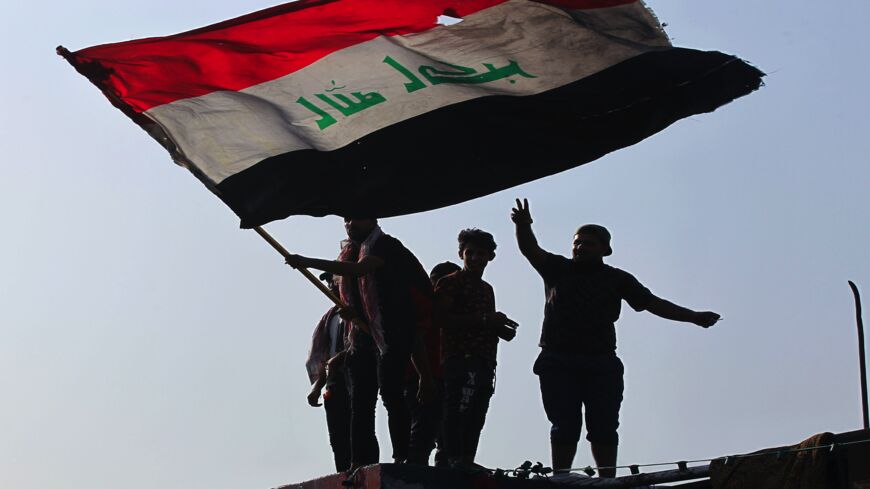 Iraqi demonstrators wave a flag as they gather in Tahrir Square in the center of the capital, Baghdad, on October 25, 2020, to mark the first anniversary of a massive anti-government movement demanding the ouster of the entire ruling class accused of corruption. - AHMAD AL-RUBAYE/AFP via Getty Images

BAGHDAD — Corruption remains rampant in Iraq despite some improvement in recent years. Procedures and practices within the security forces seem to be fostering this, raising additional concerns after recent high-profile cases, attempted cover-ups and a jailbreak across the border.

In Transparency International’s 2021 Corruption Perception Index published in January, the country gained two points compared with the previous year and is now considered at the same level as Zimbabwe, Cambodia and Honduras regarding perceived levels of public sector corruption.

According to the US Department of Defense Inspector General report covering the fourth quarter of 2021, the Iraqi Security Forces (ISF) “continued to face what USCENTCOM characterized as ‘daunting challenges from rampant corruption at every level.’"

The report said this corruption included “pay-to-play schemes, nepotism, bribery, pursuing personal vendettas, and infighting within and among services and ministries.”

The most high profile of “personal vendettas” within the ISF in recent months resulted in a lieutenant colonel from the Interior Ministry being sentenced to death in February. Accountability for such crimes, however, is believed to be rare. Media attention is believed to have played a significant role in ensuring justice in this particular case.

The officer had been involved in the December killing of 20 members of the same family in a raid on a home on the basis of false information. Reports had initially claimed the target of the raid was a terrorist, only to later report that drug trafficking of some sort had been involved.

An incident in the southwestern part of Kirkuk province in September that killed at least a dozen security officers, also led to questions about both the security forces operating in the area and official reports on it after a female Iraqi journalist claimed in an article the attack had been retaliation by members of the local community after an adolescent girl had been raped by two of the security forces killed.

Official government media sources had initially given accounts praising the forces involved and conveying accounts of the incidents that turned out to be false.

Journalists in Iraq are regularly warned to quote only official sources. However, this obstructs freedom of information in the country, thereby hindering accountability.

Across the border in northeastern Syria, several SDF members were reportedly arrested for “corruption” after a massive jailbreak in late January that resulted in the release of hundreds of Islamic State (IS) suspects, including many battle-hardened fighters and commanders. Fighting continued for over a week in the January attack, leaving hundreds dead.

Many Iraqi nationals were held in the prison attacked, which this Al-Monitor correspondent reported was at risk only a few days prior to the attack.

This correspondent has reported multiple times independently from SDF territory, where numerous Arab inhabitants have alleged massive corruption and human rights abuses by the US-backed, Kurdish-led Syrian Democratic Forces (SDF), who control the territory where the prison attacked in January is located.

The SDF is known for its restrictive media practices, regularly requiring “minders” in the form of SDF-approved fixers and banning — at times officially, other times simply by refusing access — media organizations and specific journalists.

Corruption within the Iraqi military played a key role in IS's takeover of vast parts of the country in 2014. It took over three years of war with extensive support from the US-led international coalition against IS before victory was declared against the group in the country.

As one media outlet reported in 2014, shortly after Mosul was taken over by IS: “Endemic problems of fraud in military contracting, extortion at checkpoints and the padding of rosters with nonexistent soldiers were things the US military was never able to solve and sometimes ignored” during its presence in the country following the 2003 invasion.

The recent Department of Defense Inspector General report in relation to the last quarter of 2021 noted that the “Office of Security Cooperation-Iraq (OSC-I) at the US Embassy in Baghdad is not part of OIR (Operation Inherent Resolve) but supports the development of Iraq security institutions,” and “to mitigate corruption associated with padding ISF payrolls, including through payments to ghost soldiers, OSC-I continued implementing the Human Resources Management System for the MoD, the MoI and the Ministry of Peshmerga Affairs.”

It noted, “OSC-I said that the intent of payroll system reform was to enable the ISF to employ more efficient methods of managing human capital while combating corruption through digital, traceable and accountable processes.”

In an exclusive February 2020 interview with this Al-Monitor correspondent, then-head of the highly secretive Falcon Intelligence Cell Abu Ali al-Basri had suggested setting up a unit similar to the one under his command, stressing that “terrorism generates corruption and corruption generates terrorism.”

He said his unit had at times taken on corruption cases linked to terrorism and that he had spoken to the government about setting up a similar unit specifically for these cases.

The EU announced in January that it had taken Iraq off the list of countries at high risk of money laundering and financing terrorism, signaling improvement. It had been added to the list in 2016.

An anti-corruption committee formed shortly after Prime Minister Mustafa al-Kadhimi was sworn in as prime minister in May 2020 was declared anti-constitutional earlier this month in one of several recent rulings by the country’s Federal Supreme Court widely perceived as politically motivated.

Some have argued about the court that “a blind eye is still turned to more urgent matters today,” citing “when the court ignored lawsuits on the legality of Iraqi political parties having their militia groups and military arms” as an example.

The anti-corruption committee formed under Kadhimi, in a few months after the abovementioned interview with Basri, had — as Al-Monitor reported earlier this month — “focused on high corruption and terrorism cases. It had arrested 36 suspects, of whom 16” had been sentenced.

Among those arrested was senior Popular Mobilization Units (PMU) commander Qassim Musleh, who was later released and who continues to be in a leadership position for the PMU in the Iraqi-Syrian border area, local sources told Al-Monitor in March.

This border area has long been notorious for smuggling weapons, fighters, sheep and drugs.

Security sources have told Al-Monitor that there were reasons to arrest Musleh but that “external pressure” had led to his release.