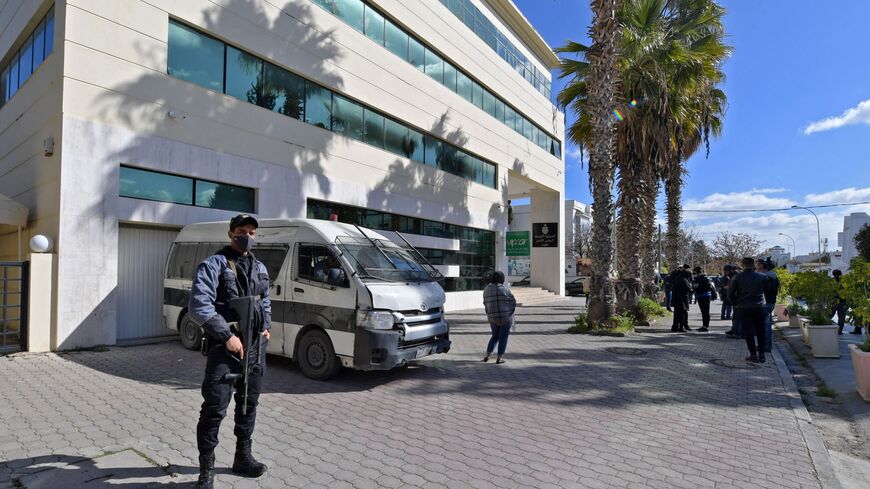 Members of the Tunisian security forces stand outside the closed headquarters of Tunisia's Supreme Judicial Council (CSM) in the capital Tunis on Feb. 7, 2022. Tunisian President Kais Saied on Feb, 5 dissolved the country's top independent judicial watchdog, accusing it of bias, the latest controversial move since he sacked the government last year. - FETHI BELAID/AFP via Getty Images

The Biden administration on Monday voiced concern over Tunisian President Kais Saied’s attempt to dissolve an independent judicial watchdog, a move that analysts say will further threaten democracy in what was once considered the Arab Spring’s sole success story.

“The United States reiterates our calls for an accelerated political reform process in Tunisia that responds to the aspirations of the Tunisian people,” he said.

On Sunday, Saeid announced he was dissolving the Supreme Judicial Council, calling it “a thing of the past.” He accused the independent watchdog, which oversees the country’s judges, of bias and corruption.

Why it matters: Fears of democratic backsliding in Tunisia continue to grow, more than six months after Saied fired then-Prime Minister Hichem Mechichi, suspended the country’s elected parliament and announced he would rule by decree indefinitely. Saied’s actions initially had widespread public support, but his approval numbers are sinking as discontent with the economy and his handling of the coronavirus crisis grows.

What’s next: Last month, the top Democrats and Republicans on the Senate and House foreign affairs panels wrote to Secretary of State Antony Blinken urging him to consider “conditioning certain aid on measurable reforms” in Tunisia.

The Biden administration has so far refrained from saying whether Saeid’s power grab in July constituted a coup, despite Congressional calls for a determination to be made public.