The lawmakers called on the Biden administration to promote good governance initiatives in the North African country. 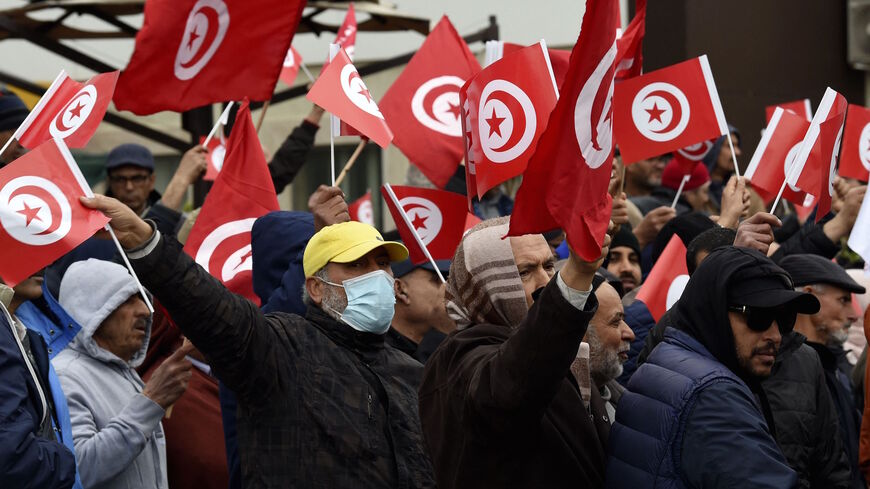 Tunisian protesters raise placards and national flags during a demonstration against their president not far from the Tunisian Assembly headquarters in the capital Tunis on March 20, 2022. - FETHI BELAID/AFP via Getty Images

A group of House Democrats are calling on the Biden administration to consider Tunisia’s anti-democratic slide as it works with Congress on spending plans for the coming fiscal year.

“We encourage the State Department to prioritize programs that support a restoration of democratic governance, due process, and the rule of law in the country,” read the March 25 letter to Secretary of State Antony Blinken.

The letter, which was led by the House's Middle East subcommittee chair Rep. Ted Deutch (D-Fla.) and Foreign Affairs Committee Chairman Rep. Gregory Meeks (D-N.Y.), also called for assistance to the country’s internal security force to be “carefully reviewed” given its role in the repression of Tunisian citizens.

The 23 lawmakers expressed support for a decision by the Millennium Challenge Corporation, a US government foreign assistance agency, to hold off on signing a new development aid compact with Tunis. Moving forward with a grant agreement "in the current political climate would send the wrong message,” the lawmakers said.

Why it matters:  Tunisia’s fragile democracy is facing its biggest-yet test, more than a decade after the North African country emerged as the Arab Spring’s lone success story. In what his critics called a coup, Tunisian President Kais Saied sacked his prime minister, suspended the elected parliament and effectively assumed one-man rule last summer. The former constitutional law professor has continued to sideline opponents since his July 2021 power grab, describing his actions as part of a necessary political overhaul.

The congressional Democrats described their continued concern for Tunisia’s reform process. They pointed to Saied’s threats to halt foreign funding for civil society groups and his recent disbanding of the country’s independent judicial watchdog, a move they said “demonstrates the lengths he will go to consolidate power.”

“We have witnessed over the past eight months a clear and tangible erosion of the democratic institutions that the Tunisian people have spent over a decade building,” the letter said, noting that Saied’s proposed timeline for a constitutional referendum and parliamentary elections lacks “avenues for inclusive dialogue with diverse political and civil society voices.”

Know more:  Elizia Volkmann reports on an increase in arbitrary arrests and police violence targeting people of sub-Saharan origin in Tunisia, and a group of former US diplomats want the Biden administration to dial up the pressure on Saied.