A letter from some 50 activists, academics and former diplomats calls for the Biden administration to condition certain assistance to Tunisia on steps toward democratic governance. 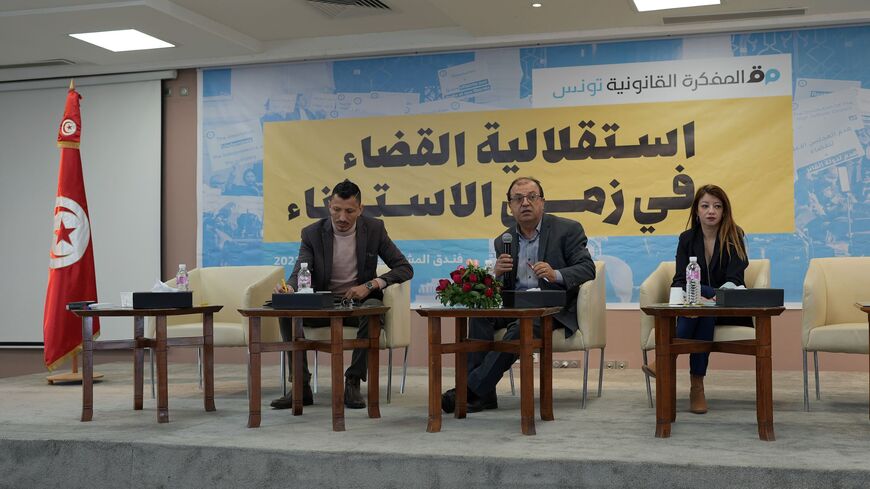 Judges Ali Khelifi, Afif Jaaidi and Refka Mbark attend the conference for the independence of the judiciary in times of emergency on Feb. 19, 2022 in Tunis, Tunisia. Tunisians took to the streets in protest of a controversial new law by President Saied allowing him to extend his power over the country's judiciary system. - Séverine Sajous/Getty Images

A group of former US diplomats and Middle East experts want the Biden administration to dial up the pressure on Tunisia’s president to reverse the country’s anti-democratic slide.

“We fear that the absence of a strong US reaction to [Kais] Saied’s assault on democracy may have encouraged him to press forward on his destructive path,” read the letter sent to President Joe Biden on Thursday.

Some 50 experts, including several former US ambassadors to Tunisia, urged Biden to work with Congress to condition US security assistance on Tunis taking several steps toward democratic governance, including ending trials of civilians in military courts and ensuring accountability for police brutality. They also recommended additional economic support come only after Tunisia restores its freely elected parliament, reinstates independent bodies and ensures free speech protections.

Offering incentives for progress, they wrote, “would demonstrate support for the Tunisian people while encouraging urgently needed moves to protect democracy.”

Why it matters: Rights groups and Tunisia’s political opposition say democracy is under threat in the country that inspired the Arab Spring.

In what his critics called a coup, Saied fired his prime minister and suspended the elected parliament in July. He’s continued to sideline political opponents and has extended Tunisia’s state of emergency through the end of 2022.

Biden’s response to Saeid’s power grab has drawn some scrutiny in Congress. In January, the top Democrats and Republicans on the Senate and House foreign affairs panels urged the administration to consider “conditioning certain aid on measurable reforms” in Tunisia.

What’s next: Under heavy international pressure, Saied announced a political “roadmap” in December, which as the letter notes, “was produced unilaterally, without transparency or input from other Tunisian political and civic actors.” Saied has said he will hold a constitutional referendum in July, followed by the election of a new parliament in December.

Know more: Tunisia’s journalist union is warning that press freedoms are eroding in the North African country amid a heightened campaign of arrests and prosecutions.