Expected interest rate hikes by the US Federal Reserve to rein in inflation will deal further blows to Turkey’s economic turmoil. 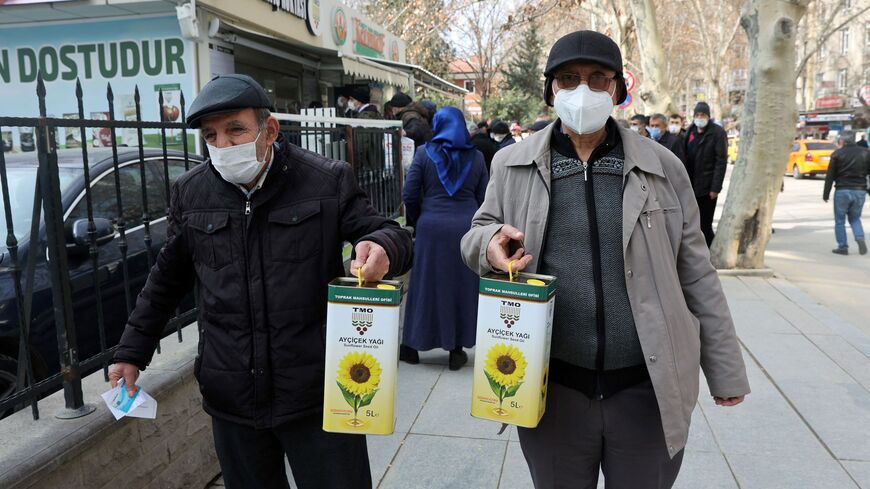 Two men carry cans of oil sold cheaply by the Agricultural Products Office in Ankara on Feb. 17, 2022. Turkey's central bank today kept its main interest rate steady again as the country faces soaring inflation. The bank left its policy rate at 14 percent for the second time in a row after a four-month streak of cuts which caused a currency crisis late last year that decimated people's purchasing power. (Photo by Adem ALTAN / AFP) (Photo by ) - ADEM ALTAN/AFP via Getty Images

Following a January increase of 7.5% in US year-on-year consumer prices, the Federal Reserve is expected to raise interest rates in its March meeting in a bid to rein in the inflation. Although how aggressively the US central bank will hike the rates remains unknown, markets expect a hike of at least 25 basis points (0.25%).

The move, which will boost the US dollar, raises the specter of foreign funds flowing to the American markets. For emerging economies, particularly for Turkey, expected rate hikes to rein the inflation are bad news but hardly unanticipated.

Most emerging economies have already taken several steps to weather the economic impact of the Fed’s potential rate hikes, including interest rate hikes of their own to safeguard the value of their currencies and prevent the flight of foreign funds.

But Turkey’s Central Bank did the exact opposite by cutting the interest rates 500 basis points since September under political pressure, triggering an outflow of foreign funds — a process likely to speed up by the Fed’s rate hikes. Turkey’s President Recep Tayyip Erdogan defends an unorthodox view that high interest rates cause high inflation.

Finance and Treasury Minister Nureddin Nebati’s trip to London last week to pitch Turkey's unorthodox economic model appears to be fruitless so far. Indeed, a few days after Nebati’s return, credit rating agency Fitch downgraded Turkey's sovereign debt rating further into junk territory citing increasing financial vulnerabilities. The country’s current account deficit reached $6.6 billion in November-December, with the annual current account deficit standing at some $15 billion. The deficit is expected to widen in January and will remain as a problem for the country’s import-reliant economy in 2022.

The US Federal Reserve aims to lower the inflation that was fueled by supply bottlenecks stemming from the pandemic by gradually increasing interest rates. Markets expect the total rate hikes will reach 100 basis points by July.

The European Central Bank (ECB) is also considering interest rate hikes, albeit in a less aggressive fashion than the Fed. "The cycle of the economic recovery in the US is ahead of that in Europe. We thus have every reason not to act as rapidly and as brutally," European Central Bank (ECB) head Christine Lagarde was quoted as saying by Reuters. Financial markets expect hikes of up to 60 basis points by the end of the year.

The Bank of England has already raised rates twice since December, with markets expecting a further increase after its next meeting in March.

Western monetary tightening has helped push interest rates up globally, with many emerging countries trying to make their currencies more appealing to foreign investors. In Turkey, on the other hand, the central bank lowered the rate to 14% with consecutive cuts since September.

This, in turn, has accelerated the flight of foreign funds from the country. December alone has seen a net outflow of $8.7 billion. The inflow of foreign direct capital of some $2.5 billion can be attributed to real estate purchases by foreigners.

In a bid to prop up the Turkish lira and rein in dollarization, the government introduced a series of measures in December including a state guarantee to compensate lira depositors for any declines the currency may suffer. Yet, the safeguard seems to have inspired little confidence. Some 65% of individual deposits are still in hard currency mainly because of lingering mistrust in the Turkish government. Furthermore, hard currency is still considered a safe haven for savings amid staggering inflation, which will likely climb close to 60% in the next two months.

Turkish external debt, which has reached some $168 billion, coupled with the Fed’s expected rate hikes can trigger fresh demand for the US dollar, sending the lira into a nosedive anew.

“The risk of additional destabilizing monetary policy easing or stimulus policies ahead of the 2023 general elections is high, and there is an elevated degree of uncertainty about the authorities' policy reaction function in the event of another episode of financial stress, as political considerations limit the central bank's ability to raise its policy rate,” Fitch said. Similarly, Standard and Poor’s and Moody’s cut Turkey’s grades in December and September respectively.