War would bring Turkey under intense pressure from its Western allies to join putative sanctions against Russia, a critical trading partner and supplier of natural gas. 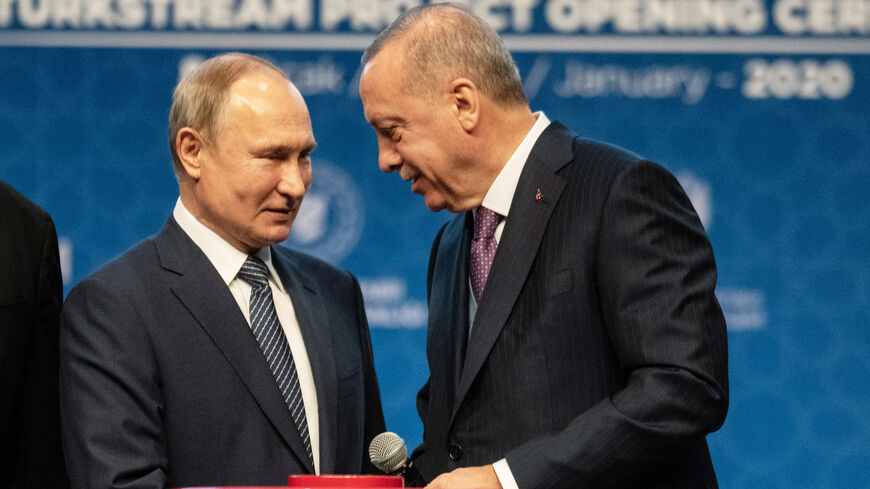 Turkish President Recep Tayyip Erdogan’s Feb. 3 meeting with his counterpart Volodymr Zelenskyy in Ukraine yielded a string of accords aimed at deepening economic and military ties between Ankara and Kyiv and thereby significantly raised the stakes for both sides should Russia attack the former Soviet state.

Russian land and naval forces remain massed around Ukraine as Western leaders scramble to find a diplomatic solution to defuse the crisis. Erdogan has offered to mediate between Russia and Ukraine and for good reason.

War would bring Turkey under intense pressure from its Western allies to join putative sanctions against Russia, a critical trading partner and supplier of natural gas. Turkey will do its best to remain neutral, as signaled anew by Erdogan in comments to reporters en route home from Kyiv. He accused Western governments of making the Ukraine-Russia crisis “worse” and rued the absence of former German Chancellor Angela Merkel, long accused of appeasing the Kremlin. He said Europe was suffering “serious issues at the leadership level” after her departure. US President Joe Biden had failed to “demonstrate a positive approach,” he added.

His comments echoed Moscow’s accusations that the United States and NATO are escalating tensions including through their deployment of additional troops to eastern Europe and continued arms deliveries to Ukraine. Many believe Erdogan’s comments are meant in part to assuage Moscow over Turkey’s sale of combat drones and other military equipment. During Erdogan’s visit the Black Sea allies agreed to jointly produce Bayraktar TB2 combat drones in Ukraine and build a maintenance and training center for operators alongside the planned facility.

Ukraine has bought at least 20 drones from Turkey since 2018 and has used one only once in combat against Russian-backed separatists in Donbass in October 2021, eliciting growls from Moscow.

However, Turkey’s worries go beyond having to balance its NATO commitments with Russia, a key economic partner and since 2016 security partner in Syria. An actual war could have crippling consequences for Turkey’s battered economy.

The national currency, the lira, shed 44% of its value last year and spiraling inflation hit an annual 48.69%, the highest in two decades, according to official data released on Feb. 3.

Sharp hikes in utilities, notably electricity, have unleashed a wave of protests across the country amid power shortages and blackouts in major cities.

“Commodity prices, particularly oil and gas, are a lead indicator for inflation and Turkey has struggled even without these headwinds due to the government’s eccentric policies regarding interest rates,” said a London-based banker who closely monitors Turkey. The banker, who requested anonymity, was referring to Erdogan’s stubborn refusal to raise interest rates based on the idea that it would fuel inflation, while most economists hold that the opposite is true.

“A Russian incursion or, worse still, a full-scale invasion,” the banker said, “would add further price pressure on commodity inputs, which would only spur more inflation.”

It was not surprising, the banker noted, that some Western banks were forecasting that the Turkish lira would slump to 20 to the dollar or even lower this year, “with the myriad of dangers that lie ahead and with Erdogan being seen to have played his last card on linkage of Turkish lira deposits to US dollar rates last year."

Under the scheme, the state compensates Turkish lira depositors for any loss incurred by a drop in the national currency that exceeds the deposit rates paid by their banks. Since its December launch, the lira has stabilized at around 13.5 to the dollar but would likely melt anew in the event of a Russian invasion.

According to data published Monday, Turkey’s Central Bank sold its state-run energy importer, BOTAS, a record $4.15 billion in foreign currencies in January alone. The trade deficit, in turn, soared to a decade high of $10.44 billion, a year-on-year increase of more than 240%, largely due to ballooning energy imports.

In Ukraine, Turkey’s flourishing defense cooperation would likely suffer in a Russian attack as well. Motor Sich, one of the world’s largest manufacturers of engines for airplanes and helicopters, has been supplying engines for the Turkish drones along with Ivchenko Progress, a stated-owned Ukrainian company, since 2020. That is when the US Congress began blocking military sales to Turkey over its acquisition of Russian-made S-400s and Canada over the use of Turkish drones against Armenia in support of Azerbaijan. Experts reckon that Ukraine’s defense industry would be an obvious target for Russian forces.

In the event of a full-scale invasion by Russia, “defense industry facilities as well strategic industrial and infrastructure elements would be primary targets for the Russian military," independent defense analyst Arda Mevlutoglu observed in the most recent issue of the Ankara-based weekly English-language Anka Review. "The destruction of manufacturing facilities as well as the loss of skilled personnel would deal a devastating blow to the Ukrainian defense industry as well as to Turkish defense projects."

“Developing defense industry relations between Kyiv and Ankara should not be perceived as a direct threat by Moscow. However, Turkey’s possible increase influence and activity in Ukraine would be an undesirable outcome for Russians,” Mevlutoglu told Al-Monitor. “It’s also a fact Russia puts great emphasis on cyber and electronic warfare operations. Based on these premises, there is considerable risk that Russia might conduct kinetic and/or cyberattacks on Ukraine’s defense industry base, which in turn would affect the supply of products to Turkey.”

Recent deals between Turkey and Ukraine include the supply of gas turbines for Turkish-designed naval vessels by Ukraine’s Zorya Mashproekt. Ukraine has ordered four of the MilGem class corvettes for itself.

Tourism, which Erdogan is banking on to help with an economic recovery ahead of parliamentary and presidential elections that are scheduled to be held by 2023, is also at risk.

In the event of war, Russian tourists may well continue to flock to the Turkish coast this summer. But what of the millions of Ukrainians who jostle with them on Turkey’s Mediterranean beaches? Will they want to share the same space?

When Russian President Vladimir Putin banned chartered flights to Turkey in retaliation for its shooting down of a Russian air force jet over Syrian skies in November 2015, many Ukrainians were delighted. “We had a perfect time, no Russian tourists in Turkish hotels,” recalled Yevgeniya Gaber, a leading Ukrainian scholar of Turkish affairs and a senior fellow at Carleton University’s Center of Modern Turkish Studies.

As for Erdogan’s chances of brokering peace between Zelenskyy and Putin, they are pretty slim, Gaber predicted. Putin’s planned official visit to Turkey, which the Kremlin said would take place after the Beijing Olympics though it gave no date, is more about “testing the waters, seeing how far Turkey can accommodate Russia in its standoff with Ukraine and who can compromise on what,” and not about acquiescing to Erdogan’s proposal to mediate, Gaber told Al-Monitor.

At best, Turkey can provide the two sides with “an optional diplomatic channel of communication” through which their respective messages are relayed.