Russia flexes in Syria as US warns of Ukraine invasion

The Kremlin is exercising its power well outside of Europe with naval and air drills on the Mediterranean ahead of an expected invasion of Ukraine. 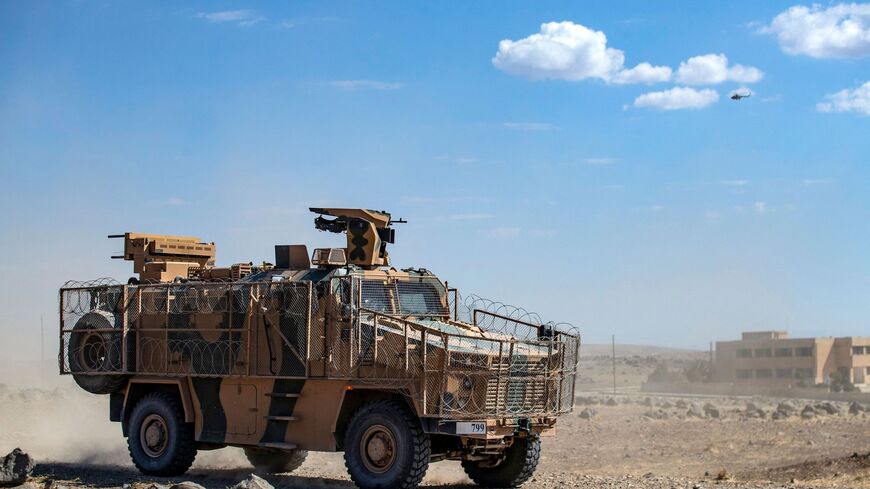 A Russian helicopter hovers in the distance as Turkish and Russian military vehicles patrol in the countryside of Rumaylan in Syria's northeastern Hasakeh province near the Turkish border, on Sept. 16, 2021. - DELIL SOULEIMAN/AFP via Getty Images

The US and its closest Western allies believe Russia may invade Ukraine in the next few days. If carried out, such a war would be catastrophic for eastern Europe and would likely launch tumult the region has not seen in three decades, if not since World War II.

But such a conflict would not only affect Europe. Last week, the nominee for the next commander of US forces in the Middle East told lawmakers that a Russian invasion of Ukraine is likely to have ripple effects in Syria — where Russian, American, Turkish and other foreign soldiers are backing a patchwork of local factions across a stalemated battlefield.

“If Russia does invade Ukraine they would not hesitate to be able to act as a spoiler in Syria as well,” Lt. Gen. Michael E. Kurilla told US senators last week.

What that means: Russian forces backing the regime of President Bashar al-Assad have tested US troops and their Kurdish-led partners on the east side of the Euphrates River in recent years.

While most altercations occur in electronic warfare, other run-ins have turned deadly. In early 2018, several hundred Russian Wagner mercenaries and Syrian irregular forces attempted to seize a US- and Kurdish-held natural gas field in the country’s east, only to be annihilated by US airstrikes approved by the Pentagon.

US and Russian commanders maintain a direct phone line known as a “deconfliction channel” to prevent such incidents in Syria, and that resource has reduced such incidents in recent years, as have direct calls from the Pentagon’s top general, Chairman of the Joint Chiefs of Staff Mark Milley, to his counterpart Valeriy Gerasimov in Moscow.

Russian forces in Syria, however, have become increasingly assertive over the past few months, a Pentagon watchdog report revealed last week.

“[T]he Russian military committed an increased number of violations of the deconfliction protocols it has with [US-led] Coalition forces to coordinate air and ground movements in Syria, compared with previous quarters,” the report read.

The majority of those incidents occurred between troops on the ground, and most “posed no threat to Coalition forces,” the Pentagon report said.

Once separated by the Euphrates River, the rival powers’ troops came into closer proximity after former President Donald Trump ordered, then cancelled, a withdrawal of US forces from Syria in 2019.

Still, Washington’s roughly 900 troops in Syria are considered by policymakers to be among the more vulnerable American forces in the region.

Syrian pro-government forces have also harassed US troops in recent years, though American-led coalition personnel have increasingly sought to keep their distance from pro-regime checkpoints.

What to watch for: While the US-led coalition still controls the skies over the northeast, harassment of American aircraft by Russian planes has increased over the past week.

Last weekend, US Navy P-8A Poseidon aircraft had three separate close calls with Russian fighter jets over the Mediterranean, which Pentagon officials called “unprofessional.” One of the Russian jets, an Su-35, reportedly came within five feet of a US Navy plane. The encounters were the first of their kind reported in the region in two years.

Meanwhile in Europe, the US has taken overt military intervention on behalf of Kyiv off the table, while still sending additional forces to bolster NATO countries.

Calling Washington’s bluff, Russia has outflanked a US show of force with nuclear-capable B-52 bombers in eastern Europe by projecting its own bombers southward to the Mediterranean. Earlier this week, Russian long-range Tupolev Tu-22 bombers and MiG-31K’s carrying Kinzhal hypersonic missiles deployed to Moscow’s base at Hmeimem, on Syria’s northwest coast.

Why Syria matters: The Kremlin’s military intervention on behalf of the Assad regime in 2015 gave it a strategic foothold on the Mediterranean, from which Moscow has able to project mercenaries into Libya and sub-Saharan Africa, raising a strategic challenge to the US outside of Europe.