Supporters of opposition head Benjamin Netanyahu rallied last night in Tel Aviv, claiming that the Pegasus affair is part of a conspiracy against their leader. 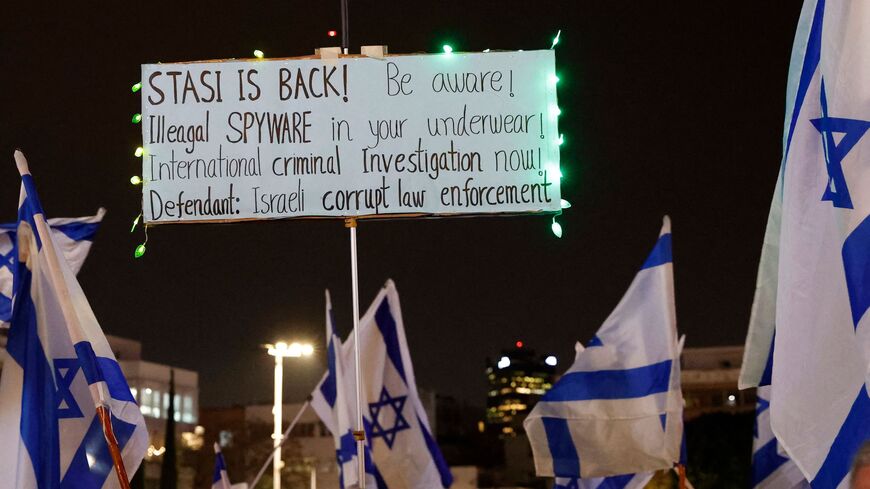 Former Prime Minister Benjamin Netanyahu’s call for a commission of inquiry to investigate the Pegasus affair galvanized the streets on Thursday night. Supporters of Netanyahu gathered at the Tel Aviv Habima Square to demand that a commission be established immediately as the appropriate response to recent reports that the Israeli police used the spyware on witnesses in Netanyahu's trial.

When Israel's Pegasus affair was first revealed a few weeks ago in the Calcalist financial newspaper, the initial reports did not relate to the Netanyahu trial. That came later. Now his supporters say that Netanyahu is being persecuted, claiming that the case against him was fabricated as a ploy to remove him and the right from power. They accuse legal and media elites of being behind the scandal.

A few former ministers and current Knesset members showed up in Habima Square, but despite Netanyahu’s promise that there would be a surprise in a video he released a day earlier to encourage his supporters to attend, the man at the epicenter of the event was nowhere to be seen, aside from in another video.

Sources close to him told Al-Monitor that Netanyahu was in his car on his way to the demonstration, his security detail on site preparing for his arrival, when he suddenly decided to turn around and go home. Perhaps Netanyahu expected a bigger crowd, or was worried about the event spinning out of control and eventually being blamed on him, or both.

Netanyahu’s rivals were quick to call the event a failure. They mocked the demonstrators, saying that their leader abandoned them. But the overriding public sentiment believes less and less in what the police have to say.

The crisis of trust is the result of an accumulation of disappointments going back to the police's aggressive enforcement of coronavirus regulations months earlier. The spyware scandal only intensified the sense of alienation.

It is inevitable that Netanyahu is leading this protest, which is key to his entire legal and political struggle, and he is doing so on a wave of authentic public sentiment.

In the video, which was shown on an enormous screen, he said, “I am with you when we demonstrate on behalf of individual rights and freedoms, on behalf of our democracy. I am with you, the many thousands of Zionist patriots, who have come to demand an official commission of inquiry. I am with you in demanding that such a commission be established to investigate this severe case of espionage, in which the police spied on Israelis.”

He told them that when he went for a walk with his wife on Saturday, “We met an immigrant, who told us that she came to Israel from the Soviet Union. ‘I left that regime and moved to a democratic state, but now I feel that our democracy is at risk.’ She told me, 'We cannot accept that.’”

Netanyahu must be aware that there is little chance of his trial being halted, but that is not his goal. His standing in the polls in excellent. He is head of the country’s largest political party, with an enormous lead over any other candidate. He has managed to grow even stronger despite his removal from power. He is ready for the next round of elections, even if they're far of. Then again, there is no telling whether such a polarized coalition will manage to complete its term.

Netanyahu seems to be aiming for a lengthy public protest. He is almost certain to appear in one of the upcoming demonstrations because this is his moment. Thursday’s demonstration was just the opening salvo, organized in the last few days and supported by the Likud party, which even funded buses from across the country. A turnout estimated in the thousands came out Habima Square carrying signs calling for an official committee of inquiry and condemning the police and legal system.

The demonstrators have a political arm in the Knesset, where members of the opposition will continue to demand an investigation into the police spying on civilians. Meanwhile, calls within the coalition, led by Justice Minister Gideon Saar, have been toned down considerably. Perhaps their motivation died as soon as they realized that an investigation could help Netanyahu.

Meanwhile, an investigation conducted by a team including representatives of the attorney general’s office and various security agencies has found only one case of the police using Pegasus illegally: the state witness in Netanyahu’s trial, former director general of the Ministry of Communications Shlomo Filber. In another instance, Iris Alovitz, who along with her husband was also charged in relation to the Netanyahu trial, unsuccessful attempts were made to install the spyware on her phone.

Now, Netanyahu’s lawyers are demanding that the court order the state attorney’s office to hand over any material obtained illegally. The court is expected to rule on it next week, though the trial has been on hold for the past few weeks. Meanwhile, Netanyahu will continue to lead the masses in demanding a commission of inquiry. It is a catchy and effective campaign, and perfectly suited to his needs.

Netanyahu’s ongoing popularity was evident as former ministers and serving Knesset members showed up to address the demonstrators. Former Finance and Foreign Minister Yisrael Katz, who often considered Netanyahu’s main rival within the party and has already announced that he will run to succeed Netanyahu as head of the Likud, declared that he speaks on behalf of millions of Israelis in saying, “We are all Benjamin Netanyahu! I say that until the facts can be investigated, the entire legal process should be stopped.”

Katz is clearly aware that closeness to Netanyahu is an electoral goldmine within the Likud. He told the crowd, “Even before the investigation, it was obvious to everyone that this was part of an illegal attempt to topple a prime minister serving on behalf of the Likud and the right — to topple Netanyahu. I say on behalf of all of you, on behalf of the many millions: We are all Netanyahu!”