With the Pegasus affair growing in Israel, former Prime Minister Benjamin Netanyahu, on trial for breach of trust and bribery, says his opponents used the spyware against him. 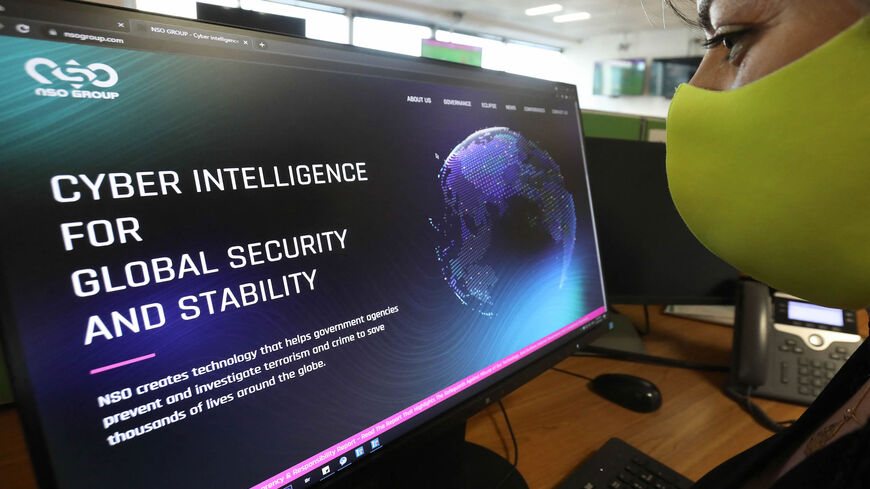 A woman checks the website of Israel-made Pegasus spyware at an office in the Cypriot capital Nicosia, July 21, 2021. - Mario Goldman/AFP via Getty Images

Israelis awoke Feb. 7 to an earthquake. According to an expose in the financial daily Calcalist, police had hacked the phones of unsuspecting Israeli citizens without a court order, using spyware developed against the country’s enemies. The list of those allegedly hacked was long and varied, including mayors, directors of government ministries, social activists, journalists and others. Among those mentioned were several close associates of former Prime Minister Benjamin Netanyahu, including key figures in his ongoing corruption trial.

The report, if true, is shocking in its civil rights implications. The alleged targeting of Netanyahu associates amplifies its destructive potential, fueling claims by the former prime minister and his allies that the investigation and prosecution against him on charges of bribery, fraud and breach of trust had all been rigged.

The resulting outcry over the revelations, which initially surfaced three weeks ago but with little detail, is compounded by broad public mistrust of the state institutions authorized to probe such allegations and get to the truth, giving further credence to claims by Netanyahu and his supporters of a political persecution designed to unseat a popular elected prime minister.

The latest reporting fuels the anarchy that Netanyahu has been spreading in recent years through his fans on social media, casting doubt on every law enforcement and legal institution, although no proof has come to light suggesting that information gleaned by the spyware planted in his associates’ cellphones had been used in his prosecution. For now, it is unclear what made the police allegedly “infect” the phones of those named in the Calcalist report, including the phone of Avner Netanyahu, the quieter and more modest of the two Netanyahu sons. But even without proof, the report has become as effective as the Israeli Pegasus software that has gained international notoriety in recent years for its use by unscrupulous regimes against their civilians.

Israeli law and its judiciary do not subscribe to the American “fruit of the poison tree” doctrine, meaning that evidence obtained illegally is not automatically excluded from trial. Case law shows that judges have ruled against such evidence in certain trials if they deemed the violation used to obtain the information was particularly egregious. There is therefore no certainty that the three Jerusalem District Court judges in the Netanyahu trial would throw out any evidence obtained through alleged hacking, nor is there any substantiation for demands by senior Likud party leaders to pull the indictments and appoint an independent inquiry commission to examine the reported infractions.

Apparently, the dramatic shock with which Netanyahu and his supporters reacted to the Calcalist reporting was faked, at best. One must not forget that Netanyahu himself appointed all the police commissioners and ministers of public security over the past 12 years.

Most of the allegations are being directed against former Police Commissioner Roni Alsheikh, who served previously as deputy head of the Shin Bet security agency and advanced the use of cybertools by the police when he took office in 2015. Netanyahu and his supporters are now pointing a finger at him, demanding that a probe be launched against Alsheikh, and even to put him on trial. They have forgotten that Alshheikh was Netanyahu’s personal choice for the position, that Netanyahu urged Alsheikh at the time to take on the job of the country’s top cop. Alsheikh, whose term ended in 2018, and the incumbent top police brass have all denied the allegations.

According to reports, the software said to have been planted by Israeli police is a downgraded version of the notorious Pegasus software developed by NSO, which Netanyahu marketed himself, along with former Mossad Director Yossi Cohen, to clients in the Middle East and other regions in order to advance Israel’s diplomatic interests. The New York Times reported recently that after disabling the Pegasus spyware sold to Saudi Arabia in the wake of its suspected use in the murder of dissident journalist Jamal Khashoggi, Netanyahu himself intervened on behalf of the Saudi clients for the software to be unblocked. Now Netanyahu claims to have been stung by that very same program. What goes around, comes around.

Until such time as the truth can be determined and the storm dies down, until an inquiry commission or investigation of some kind is launched, Netanyahu can boast of yet another victory in his campaign to delegitimize state institutions and office holders. If incumbent Police Commissioner Yaakov Shabtai doubts the police’s version denying the hacking allegations, and also favors a commission of inquiry, it would point to a collapse of governance, fueling the righteous indignation over the allegations that have sent temperatures soaring to boiling point on social media.

Just hours after the hacking news broke, the government unanimously approved the appointment of Attorney Gali Baharav-Miara as its new legal adviser and Israel’s new attorney general. Although she is the first woman to ever serve in the prestigious position, no one took time to celebrate this historic achievement. Baharav-Miara, a former district prosecutor, faces seemingly impossible tasks: to restore a modicum of calm and sanity to this overheated public and political cauldron and a measure of trust in the state’s law enforcement institutions.

Among the many conspiracy theories making the rounds one sounds relatively plausible. It argues that the wave of the latest reporting by Calcalist and follow-ups by other media are serving as a powerful weapon in the Netanyahu arsenal, perhaps in cahoots with another defendant in his corruption trial, Arnon Mozes, the publisher of the Calcalist newspaper that started it all. According to this theory, we are in the throes of a campaign to force the state into agreeing on a plea deal with the former prime minister that would avoid a seven-year ban on public office — as previously demanded by the prosecution — and allow him to rule once again after having destroyed Israel’s rule of law.