Israel's president in Greece to calm ally ahead of Turkey visit 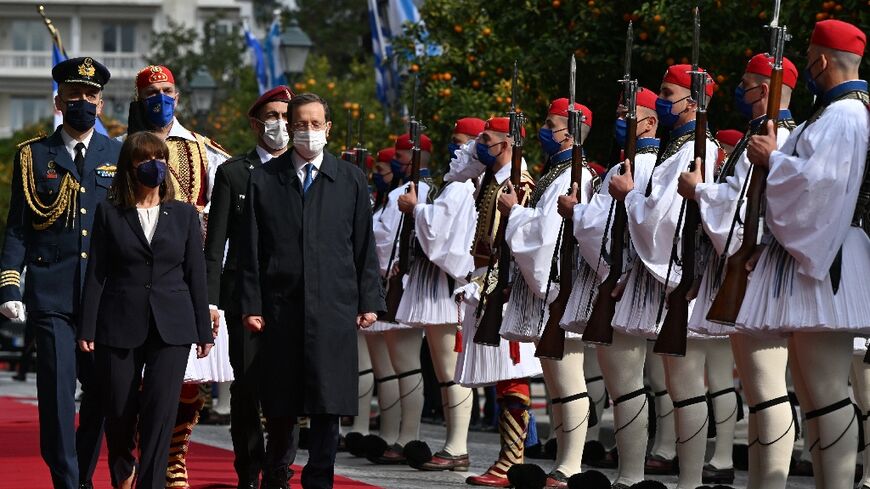 Israel's President Isaac Herzog was in Greece Thursday for a trip aimed in part at reassuring an ally as Israel makes an outreach to Turkey, with tensions fraught between Athens and Ankara.

Russia's invasion of Ukraine overshadowed the visit and Herzog opened a meeting with his Greek counterpart Katerina Sakellaropoulou by voicing support for Ukraine's territorial integrity and concern for the nation's Jewish community.

He then stressed the importance of Israel's "bold... (and) strategic partnership" with Greece, where he was making one-day trip ahead of his planned visit to Ankara next month for talks with President Recep Tayyip Erdogan, a prominent critic of Israel's policies toward the Palestinians.

Experts have said Israel must ensure its rapprochement with Turkey does not undermine its ties with Mediterranean neighbours Greece and Cyprus, two states with long-standing acrimony towards Erdogan's Turkey.

Oded Eran, a senior researcher at the Tel Aviv University's Institute for National Security Studies, told AFP that Herzog's mission in Athens was to stress that "the attempt to improve relations with Turkey will absolutely not come at the expense of ties with Greece."

At his meeting with Greek Prime Minister Kyriakos Mitsotakis, Herzog underscored that the Israeli-Greek relationship was "going from strength to strength."

An Israeli official who requested anonymity told AFP that "the improvement in the ties with Turkey is not coming at the expense of the very important relations with Greece and Cyprus."

Relations between majority-Muslim Turkey and the Jewish state froze over after the death of 10 civilians in an Israeli raid on a Turkish flotilla carrying aid for the Gaza strip in 2010.

Relations between Israel and Greece have, meanwhile, deepened over the past decade.

And in 2020, Israel, Greece and Cyprus signed the EastMed deal for a pipeline to ship gas from the eastern Mediterranean to Europe, triggering objections from Ankara.

The United States has also raised concern about the project, citing possible issues over its "commercial viability."

Israeli media have reported that Washington may also be resisting the EastMed deal as a gesture to Erdogan.

Erdogan said he expected Herzog's upcoming visit to "open a new chapter in relations between Turkey and Israel".

Turkish state media have said Herzog's visit is set for March 9 and 10.