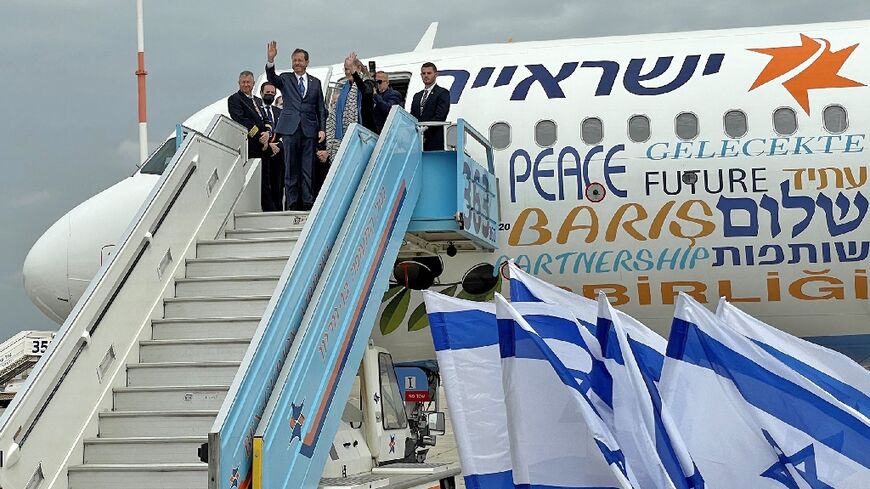 Israel's President Isaac Herzog waves as he departs for an official visit to Turkey, as the countries seek to mend fractured ties - Daphné LEMELIN
by Jonah Mandel
March 9, 2022 — Ankara (AFP)

Israel and Turkey proclaimed a new era in relations on Wednesday following more than a decade of diplomatic rupture, as Israeli President Isaac Herzog made a landmark visit to Ankara.

Herzog's Turkey trip, which included talks with President Recep Tayyip Erdogan, was the first by an Israeli president since 2007, when the late Shimon Peres addressed the Turkish parliament.

Ties then plummeted, but Erdogan, standing alongside the Israeli president, proclaimed that Herzog's "historic visit will be a turning point in our relations."

"Our mutual goal is to revive dialogue based on respect," added Erdogan, who is a vocal champion of the Palestinian cause.

Herzog, who holds a traditionally ceremonial position but has taken on an outsized diplomatic role since his July inauguration, conceded that Israel-Turkey ties "underwent a drought."

"The baggage of the past never disappears of its own accord, but we ... are choosing to embark on a journey of trust and respect," he said.

"We must agree in advance that we will not agree on everything."

Relations began to fray following an Israeli military operation in Gaza in 2008.

Ties then froze following the death of 10 civilians following an Israeli raid on the Turkish Mavi Marmara ship, part of a flotilla trying to breach a blockade by carrying aid into Gaza in 2010.

A 2016 reconciliation agreement that saw the return of ambassadors all but collapsed in 2018 in the wake of Gaza border clashes that killed dozens of Palestinians.

Herzog was received in a snowy Ankara with a military honour guard at the Mustafa Kemal Ataturk mausoleum, where he wrote an inscription praising Turkey's first president for choosing "the path of collaboration."

The presidents then held bilateral talks and were then due to partake in a state dinner.

Erdogan said he raised "the Palestine issue," and Turkey's interest in seeing "improvement in the social and political status of Palestinians."

Turkey has maintained ties with Hamas Islamists who have controlled Gaza since 2007, and are considered a terrorist organisation by Israel and much of the West.

Sources involved in the bilateral talks, who requested anonymity, said the presidents raised the presence of Hamas leaders in Turkey, a longstanding Israeli grievance.

Following the 2018 Gaza bloodshed, Turkey recalled its diplomats and ordered Israel's envoy out of the country.

The rapprochement began following Herzog's inauguration, with a congratulatory call from Erdogan to the new Israeli president, who is a veteran of the left-wing Labour party.

But Erdogan's move to secure the release of an Israeli couple arrested in Istanbul in November on espionage charges proved a "turning point", said Gallia Lindenstrauss of Tel Aviv University's Institute for National Security Studies.

The trio were part of the "East Mediterranean Gas Forum" established in 2019 with other states, including Egypt, Jordan and the Palestinian territories -- without Turkey.

For Turkey, that frustration over its exclusion from the gas talks -- as well as an internal economic crisis, and a more confrontational US administration since President Joe Biden's election -- has pushed Ankara closer to Israel, Lindenstrauss said.

Erdogan voiced readiness "to cooperate (with Israel) in energy projects," with the prospect of exporting Israeli gas to Europe through Turkey having taken on renewed urgency amid fears of impaired supply following Russia's invasion of Ukraine.

Regional ties remain sensitive, and Herzog visited both Greece and Cyprus ahead of his Turkey trip to reassure the two Israeli allies.

Before departing Israel, Herzog stressed regional "stability" was crucial when "the international order is being shaken," a message he said he delivered in Greece and Cyprus.

Erdogan described relations with Israel as "important for regional peace."

Herzog is scheduled to meet members of the Jewish community in Istanbul on Thursday, before returning to Israel.