Israel and Morocco have signed a trade and investment cooperation agreement, with Israel aspiring to enlarge its annual trade volume with Morocco from $131 million to $500 million. 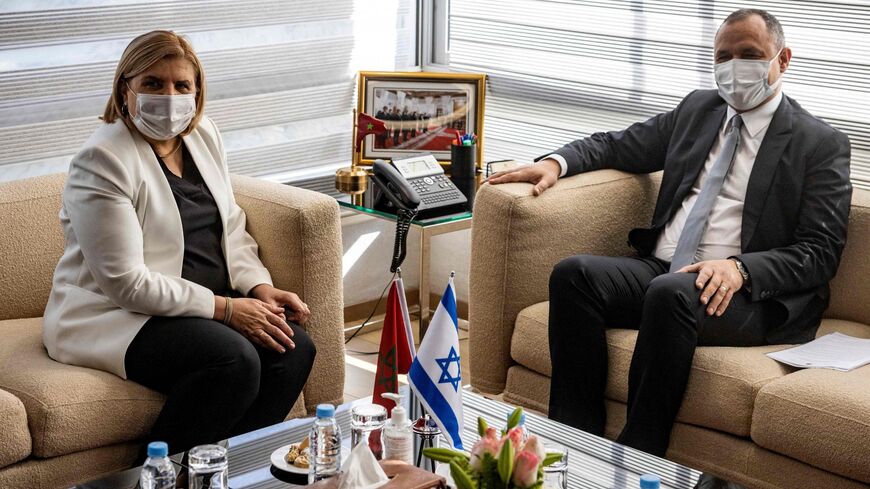 Israeli Economy Minister Orna Barbivai (L) meets with Morocco's industry and trade minister, Ryad Mezzour, in Rabat on Feb. 21, 2022. The Israeli minister arrived in Morocco yesterday for a visit aimed at developing economic and trade ties, in the latest sign of expanding cooperation after the countries normalized relations in 2020. - FADEL SENNA/AFP via Getty Images

Israel’s Trade and Industry Minister Orna Barbivai said, “The economic cooperation agreement is designed to bring about economic growth and prosperity for Israel and Morocco. By working together we will realize the latent economic potential in bilateral relations, increase the scope of trade and strengthen technological cooperation alongside rapprochement between the peoples.”

She hopes to enlarge bilateral trade between Israel and Morocco from $131 million annually to $500 million, in the next five years. The agreement will facilitate trade and investments in general, in the aerospace, automobile, agri-food, textile and pharmaceutical industries in particular.

Before signing on the agreement with her Moroccan counterpart, Ryad Mezzour, Barbivai met with Moroccan Finance Minister Nadia Fettah Alaoui to discuss possible agreements on investment incentives, customs cooperation and double taxation. Fettah Alaoui hailed the progress made in economic cooperation since the two countries signed the Abraham Accords in 2020.

Barbivai's visit to Rabat comes after a surprise visit by Defense Minister Benny Gantz last November, when he signed a first-of-its kind security cooperation agreement with Morocco. Gantz received a welcome fit for heads of state, with his photo gracing the front pages of most local newspapers, magazines and websites.

When Morocco agreed to sign the Abraham Accords, along with the Emirates, Bahrain and Sudan, its primary motivation was reportedly the American recognition of its sovereignty over the disputed Western region. Still, since then, Moroccan leadership has demonstrated genuine political willingness to engage with Israel on all levels.

Israel’s population includes a large community originating from Morocco. Rabat had established low-level diplomatic ties with Jerusalem following the 1993 Oslo Accords, but severed the newly-established ties in 2000, when the second intifada broke out. Still, Rabat enabled Israelis to visit the country even without diplomatic relations in place. Now that the two countries have relaunched diplomatic relations, thousands of Israelis are visiting Morocco more easily.

Reports last week indicate that with Morocco lifting COVID restrictions at its borders on Feb. 7, hundreds of thousands of Israeli tourists are expected to travel to there this year. In fact, many Moroccan tourist agencies have quickly put together an array of packages geared towards Israeli travelers. Several airlines now offer direct flights between Tel Aviv and Rabat, Casablanca, or Marrakesh, including El Al, Israir and Royal Air Maroc. Israel’s Arkia Airlines is also expected to launch direct flights in late March or April.