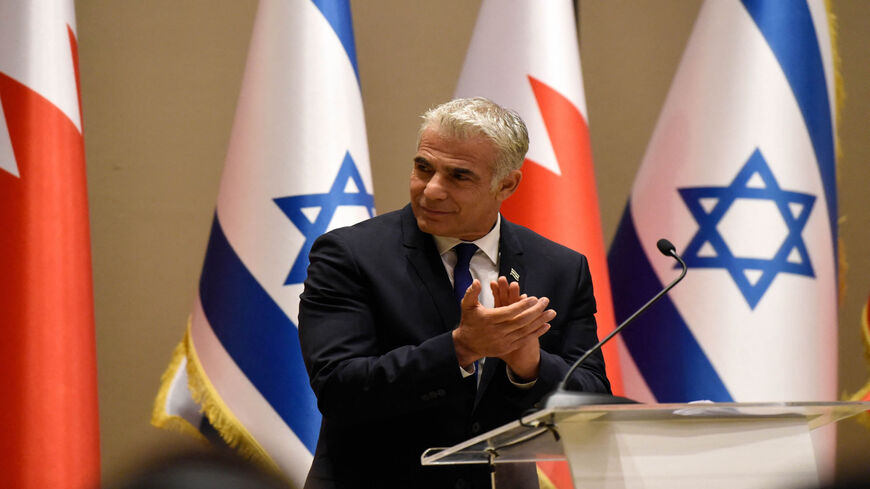 Israel and its moderate allies in the region “must build a new strategic alliance” to block Iran’s continued expansion in the region, former Israeli Minister Brig. Gen. (Res.) Ephraim Lapid told Al-Monitor’s "On Israel" podcast last week. And that is precisely what Israel is doing, at an accelerated pace, as reflected in this week’s visit to Bahrain, on Feb. 3, by Israeli Defense Minister Benny Gantz to sign a security cooperation agreement between the two countries.

It was the second such pact with an Arab country in recent months, following Gantz’s signing of a similar deal with Morocco during a late November visit to Rabat. A week ago, a delegation of senior Israeli security experts reportedly visited the United Arab Emirates to examine how Israel could help the kingdom with advance warning and interception of missiles and drones launched at its territory by Iranian-backed Houthi forces from Yemen.

These are only the developments that have been reported publicly, attesting to intensive behind-the-scenes activity with Arab and Muslim countries, such as Saudi Arabia, that have yet to establish formal relations with Israel or reveal their clandestine ones.

“A new Middle East NATO is taking shape in front of our very eyes,” was how one senior security official put it to Al-Monitor. Asked whether this means that Israel is the region’s new defense anchor given the hurried American pullout from the region in recent years, the official answered on condition of anonymity, “Yes, and no. That is in fact what is going on and we can contribute to the security of some of the most important countries in the region. No, because Israel cannot be the United States. Israel is a small state and not a world power or global police. That said, establishing an alliance comprised of Israel and moderate Sunni states in the region would constitute a powerful force multiplier that no one in the region will be able to ignore. Tehran is looking on all of this with great concern.”

Bahrain is a tiny archipelago kingdom that shares a naval border with Iran. During his visit there, Gantz also met with the commander of the US Fifth Fleet Vice Adm. Brad Cooper. At the same time, Israeli vessels were taking part in a massive US-led naval drill in the Red Sea with dozens of other countries, including some with which Israel does not have diplomatic ties. The timing of the drill was hardly coincidental. Israeli Foreign Minister Yair Lapid also visited Bahrain recently, posing for a photo op against the backdrop of a Fifth Fleet carrier.

These less-than-subtle hints of Israel’s presence at strategic military bases within spitting distance of Iran are believed to be causing sleepless nights in Tehran. “When they move stealthily toward us and try to entrench themselves on our borders [in Syria],” a highly placed military source told Al-Monitor a few weeks ago on condition of anonymity, “we do the same thing. Israel currently had a significant hold at quite a few points around Iran. That changes the rules of the game.”

Israel’s hold is not only symbolic. It is substantive with far-reaching strategic implications. Israel is able to supply the states close to Iran with advanced anti-missile and anti-drone warning and interception systems, and it also stands to gain from such a move. Theoretically, at least, it could install warning systems in those states and know in real time, within a few tenths of a second, when missiles are being launched from Iran.

What's more, such proximity could resolve one of the toughest sticking points to any Israeli plan to strike Iran’s nuclear facilities — the distance that would entail aerial refueling in order to enable a massive airborne presence over Iran. In theory, at least, a convenient landing and refueling stop much closer to Iran could constitute a dramatic strategic change in the rules of the game, and Iran is well aware of this.

On his visit, Gantz made Israel’s position quite clear. “Just as the State of Israel reserves the right to secure its citizens, assets and territory, so do we stand by our partners and support their right to defend their sovereignty and security,” he wrote in a short op-ed in the English-language Gulf Daily News.

Gantz, who was accompanied on the visit by Israel’s Navy Cmdr. Maj. Gen. David Salama, was treated to a royal welcome, meeting with King Hamed Al Khalifa, Crown Prince Salman bin Hamed Al Khalifa and Defense Minister Abdallah bin Hassan Naimi. Naimi shook the hands of all the many members of Gantz’s entourage, including the Israeli reporters who were given permission to enter the Bahraini Defense Ministry. This unprecedented show of friendship would have been considered fodder for fairy tales just two-three years ago, when Gulf officials would turn around to avoid an Israeli journalist whom they happened to see down a darkened European hotel corridor. The unexpected Middle Eastern reality has now turned every contact or meeting with an Israel into a source of pride for Gulf officials.

This flurry of diplomatic and defense developments between Israel and the Sunni states of the Middle East should also be viewed in the context of remarks made last month by Prime Minister Naftali Bennett to Al-Monitor and other media regarding Israel’s “unprecedented build-up” and the potential dramatic strategic change in Israeli policy on the use of force against Iran.

According to Bennett’s doctrine, Israel must strike at what he calls “the head of the octopus” rather than waste time and energy on retaliating against its tentacles, i.e., its proxies. Bennett has expressed himself similarly in the past. Can he now make it happen? That remains to be seen, but every single Israeli decision-maker or senior official keeps pledging that any agreement between Iran and world powers on its nuclear program, even if reached, would not be binding on Israel. Given Israel’s latest public commitments to the security of its new allies in the region, the rules of the game and state of play are likely to change. We may yet see the “new Middle East” that the late Israeli stateman and President Shimon Peres envisioned.