Iranian and Taliban officials have issued conflicting claims about how water from a dam in southwestern Afghanistan will be used, amid worsening shortages in Iran and protests. 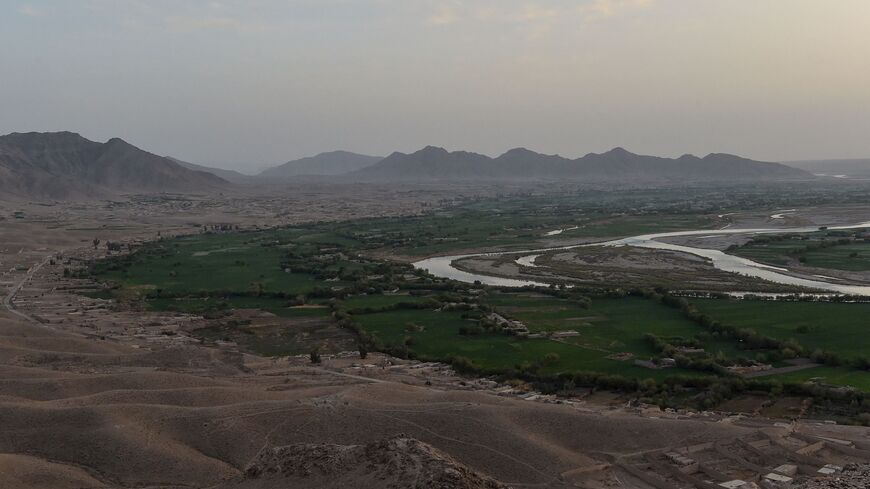 This photograph taken on March 23, 2021, shows a general view overlooking Kajaki, northeast of Helmand Province, home to one of Afghanistan's most important hydroelectric dams. - WAKIL KOHSAR/AFP via Getty Images

Protests in late January along the border between Iran and Afghanistan over water resources show that one of the key issues between the two countries remains unsolved, even as cooperation between the two deepens.

Photos were circulated of trucks with their windshields broken, reportedly by stones thrown by angry protesters just across the border from Afghanistan’s southwestern Nimroz province.

Iran’s Foreign Ministry spokesman Saeid Khatibzadeh said that the people in that area were “facing water shortage and lack of water rights from Helmand and held a peaceful protest with some unacceptable emotional behaviors.”

Iran long supported the Taliban in areas near its border for many years prior to the Taliban takeover on Aug. 15, 2021. It had done so, experts say, for geopolitical reasons as well as to ensure continuing access to key water sources.

Iran suffers from a severe lack of water, which in the summer of 2021 led to protests in the oil-rich Khuzestan province in the southwestern part of the country along the border with Iraq, which subsequently spread to other areas.

The recent protests were in the Sistan and Baluchestan province in Iran’s southeast along the border with Afghanistan.

In early January, the governor of the province said that the Taliban had released more water from the dam following official meetings between the two countries. The water, he said, would flow into Iran within a few days. The official thanked the Taliban for this move.

The Taliban denied these claims, however, and said that the extra water released would instead help local farmers in Afghanistan’s Nimroz province.

A video made by the Taliban’s Water and Energy Ministry claimed that farmers in that region had long been demanding more water be released from the dam. Locals denied this and claimed that it had been released to benefit Iran.

Sharing resources without getting anything in return is not popular with Afghans. The Taliban are struggling to shore up support amid various protests and uprisings in some areas of the country.

A disagreement over the interpretation of a 1973 treaty between Iran and Afghanistan on water from the Helmand River has plagued relations between the two countries for decades. Afghanistan started building the dam in 1974, but war and related issues delayed completion until last year.

Afghanistan completed the Kamal Khan Dam in the Nimruz province prior to the Taliban takeover in August 2021. There had reportedly, however, already been a “roadmap” agreed upon between the Taliban and Iran in February 2021 for water sharing.

Ashraf Ghani, the president of Afghanistan at the time, vowed then that Afghanistan would no longer “give away free water” and that Iran should provide oil to Afghans in exchange for more water.

The Helmand River has been called the “lifeline of water” in Afghanistan. The Helmand basin covers approximately 40 percent of the country, draining water from the southern Hindu Kush ranges as well as from Gardez in the east, Parwan northwest of the capital and Herat in the northwestern part of the country.

The older Kajaki dam, built in the 1950s in the Helmand province, is also located on the Helmand River but is further upstream. It provides electricity for more than three million Afghans in the southern part of the country and water for irrigation.

In Iran the water is also essential for the country’s wetlands and livelihoods associated with them: fishing, bird hunting, and reed harvesting, among others. Iran shares a border with Afghanistan of over 1,000 kilometers.

As Al-Monitor previously reported, Afghan fighters manning the border in the southwestern province of Nimruz – where the water Iran expects from Afghanistan crosses the border – reportedly captured at least one border position from Iran on Dec. 1, 2021, only to later retreat. Both sides officially denied casualties, despite media reports to the contrary.

Iran’s Sistan-Baluchestan region, where the protests took place, is a restive region with a separatist movement and problems with drug smuggling. It borders Afghanistan’s Nimruz province in its northern section and Pakistan in the southern part and is where a large part of the Afghans fleeing the country cross into Iran. Attempts by Pakistan to fence a key smuggling transit point have thus far failed due to armed resistance from the Taliban.

The Norwegian Refugee Council reported Nov. 10 that between 4,000 and 5,000 Afghans were fleeing into Iran on a daily basis, adding that “at least 300,000 Afghans” had entered since the Taliban takeover.

The Taliban government’s acting foreign minister, Amir Khan Muttaqi, arrived on his first official visit to Iran on Jan. 9 for talks with his counterpart, Hossein Amir-Abdollahian.

Iran’s longstanding support for the Taliban meanwhile continues to prove useful to it in multiple ways including regional trade.

According to a statement posted Jan. 25 on the Iran Chamber of Commerce, Industries, Mines and Agriculture website, the “local chamber of Sistan-Baluchestan has begun negotiations with Afghan officials for investment” in Afghanistan.

An official noted that “Iran welcomes cooperation with China in this regard” and “expressed hope that Iran and Afghanistan can sign agreements for mining cooperation in the near future.”