Afghanistan has not yet built the needed infrastructure to utilize and reserve its water, a source of tension with its neighbors, writes Fatehmeh Aman. 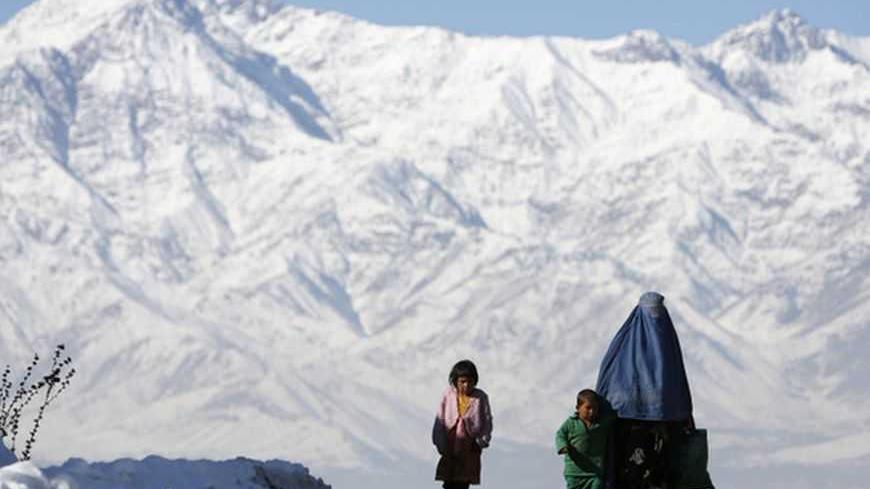 An Afghan family walks on a road in winter on the outskirts of Kabul on Jan. 3, 2013. - REUTERS/Mohammad Ismail
Fatemeh Aman
January 5, 2013

As a US-NATO deadline approaches for withdrawing most international forces from Afghanistan, the prime security challenge to the region may not be the return of insurgents but the issue of water.

Both Iran, which has a water treaty with Afghanistan that predates the 1979 Iranian revolution, and Pakistan fear that Afghan policies will deprive them of resources crucial to the well-being of their populations and future development hopes.

A recent report by the US National Intelligence Council predicts that countries such as Iran are“heavily dependent on fossil and imported water” and could become embroiled in conflicts with neighbors over dwindling water from shared river basins.

Afghanistan has had disputes over water with Pakistan since the latter country was established in 1947. Close to 17 million acre-feet of water enters Pakistan from the Kabul River every year. Planned hydroelectric projects on the Kabul River and its two main tributaries — Kunar and Panjshir — would ultimately irrigate an additional 14,000 acres in Afghanistan on top of 12,000 acres at present. However, according to some estimates, construction of 13 dams on the Kabul River would reduce Pakistan’s water supply from Afghanistan by 16-17%. Pakistani efforts to build dams and construction of the Kalabagh Dam have also been sources of tension. Several attempts to draft a water treaty with Afghanistan have failed. Pakistan media blame the lack of such a treaty on the Afghan administration.

Afghanistan has a water treaty with Iran over the Hirmand River, which was signed in 1973. However, a recent lack of rainfall has contributed to disputes over the allocation of water, which date to arbitration over the drawing of the current Iran-Afghanistan border by the British in the 19th century.

Events such as Afghanistan’s 1973 coup d’état, Iran’s 1979 revolution, and the Soviet invasion of Afghanistan in 1979, the Soviet withdrawal a decade later and an ensuing Afghan civil war have also had an impact. In 1998, the then-Taliban government of Afghanistan closed the sluices to Kajaki Dam, which blocked the flow of much-needed Hirmand water to Iran’s Sistan Balochistan province. The blockade lasted until 2002 and coincided with one of the worst droughts in the region. It had a catastrophic impact on the region’s ecosystem and led to extensive human migration in affected regions.

Since 2002, despite Iran’s heavy involvement in Afghan reconstruction projects, the issue of Hirmand has continued to be a source of tension. The dispute has taken a new course since the start of the Khamal Khan Dam project, which would severely affect the amount of water that flows into Sistan Balochistan.

Iranian hard-line media has accused “ungrateful” Afghans, “who do not appreciate what Iran has done to help them,” of violating the 1973 agreement. Afghan media quoted “Afghan officials” as saying that Iranian concerns are baseless and that “it is the right of Afghanistan to construct dams on its soil.”

Iranians respond that recent drought and the decrease of water flow into Hamoon lake in Sistan Balochistan and subsequent drought in Hamoon have caused massive sand storms that also spread infectious diseases. Iranians also accuse Afghanistan of depriving Iran of Hirmand water in order to irrigate Afghanistan’s poppy crop, the source of heroin that is a scourge for Iranian youth.

The dispute has also led to cynicism in Afghanistan over Iran’s humanitarian help. One Afghan newspaper, Weesa, has referred to Iran blocking the transport of fuel oil to Afghanistan in 2010 as a means to put more pressure on the country over water. Meanwhile, Iran media request bolder action by the Foreign Ministry and state that any aid to Afghanistan should be linked to “Iran’s rights to water.”

In 2011, Mullah Dadullah, a Taliban commander captured in southwestern Afghanistan by Afghan authorities, claimed to have been trained in Iran to sabotage projects in Afghanistan including being offered $50,000 to destroy the Kamal Khan Dam, a claim Iran has rejected. Shakila Hakimi, a member of the Nimroz provincial council, accused Iran in 2012 of conducting an insurgency in order to prevent construction of the Kamal Khan Dam.

These kinds of accusations are likely to increase in future if the dispute remains unresolved.

Afghanistan also suffers from its poor management of water resources. One of Afghanistan’s missed opportunities in the last decade was its failure to legislate a comprehensive water law. Existing law does not define water rights. Land owners are also owners of water and landless farmers have no rights to water. The water management institutions are highly ineffective. The lack of a database of natural resources and the limited ability of the government to collect data is another challenge and a major obstacle to planning and development.

Decisions on constructing new wells for domestic water usage or irrigation are made quickly and without a comprehensive plan. Yet, there is a severe under-utilization of resources. Afghanistan lacks the infrastructure to use much of the water that originates in the country and controls and utilizes only 15-30% of its water resources.

Water is a collective issue for Afghanistan and its neighbors. Any solution should therefore be multinational. Nations involved in Afghanistan, in particular US-led forces, should avoid politicizing this problem as it is so vital to the future of Afghanistan and the region as a whole. Investment decisions should be based not on efforts to deprive neighboring countries of water but on avoiding waste and improving utilization of resources. Without regional cooperation, Afghanistan will be faced with deeper and unresolvable challenges that will be even more difficult to solve after most international forces leave in 2014.

Fatemah Aman is an independent media and political analyst.

by Haitham EL-TABEI with AFP correspondents in the Middle East | AFP | May 17, 2022
END_OF_DOCUMENT_TOKEN_TO_BE_REPLACED