The IRGC has confirmed the audio of the former commander speaking about corruption. 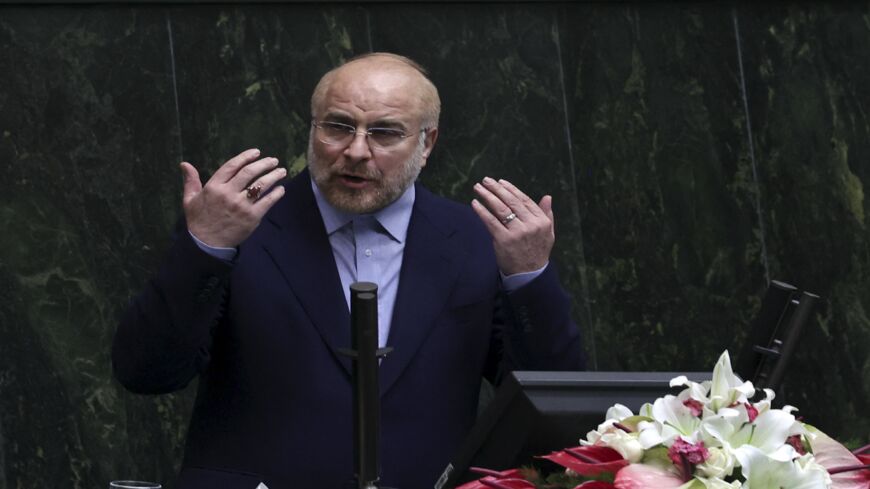 Iranian parliament speaker Mohammad Bagher Ghalibaf speaks during a parliament session on the occasion of Parliament Day in Tehran on Dec. 1, 2021. - ATTA KENARE/AFP via Getty Images

Ramazan Sharif, the spokesperson for the media department of Iran's Islamic Revolutionary Guard Corps (IRGC), addressed the leak of an audio file that includes the force's former commander speaking about corruption.

In the file, Zolgadr tells Jaffari that Ghalibaf, while he was mayor, was upset about an embezzlement case involving a missing $3 billion. Ghalibaf had met Zolgadr in person and tried to convince him to sign a contract for the missing amount in order to help him cover it up. Zolgadr claims to have responded to Ghalibaf, “This is illegal. It will be to my detriment and to your detriment as well.”

The issues are linked to various IRGC economic dealings, which in part fund IRGC activities. According to Jaffari, one of the issues was over Yas Holding, a subsidiary of the IRGC’s Cooperatives Foundation. He said that Soleimani had complained to Supreme Leader Ayatollah Ali Khamenei that the Quds Force was struggling to acquire funds due to the corruption. Khamenei had ordered that 90% of Yas Holding's earnings go to the Quds Force and the rest go to the IRGC. Yas Holding was dissolved in 2018, and some of its officials were sentenced to prison for corruption.

In addressing the audio file, Sharif downplayed the significance of its publication. He said that the IRGC itself became aware of the mismanagement and corruption of one of its economic subsidiaries. Sharif also added that the IRGC investigated the case themselves, sent the case to the judiciary and helped them prosecute those beyond the mismanagement and corruption. He said that at the time, the national media covered the news.

Meanwhile, the current nuclear negotiations in Vienna are still taking place. Iran is seeking US sanctions removal, and the United States wants Iran to roll back its nuclear program to levels stipulated by the 2015 Joint Comprehensive Plan of Action (JCPOA), which the United States exited in 2018 under the previous administration.

In a press conference, Foreign Minister Hossein Amir-Abdollahian said, “The West needs to stop playing with time and the text.” He said Western countries are trying to “play for shock and time,” and they need to show their good intentions and return to their commitments under the JCPOA. When the United States exited the deal and reapplied sanctions, European countries — while disagreeing with the decision — abided by the sanctions due to fears of secondary sanctions by the US Treasury.