Infighting between Turkish-backed factions in north Syria continues despite pleas by civilians, with most recently dozens of members of the civilian police resigning in response to a shootout with the military police that left two of its members wounded. 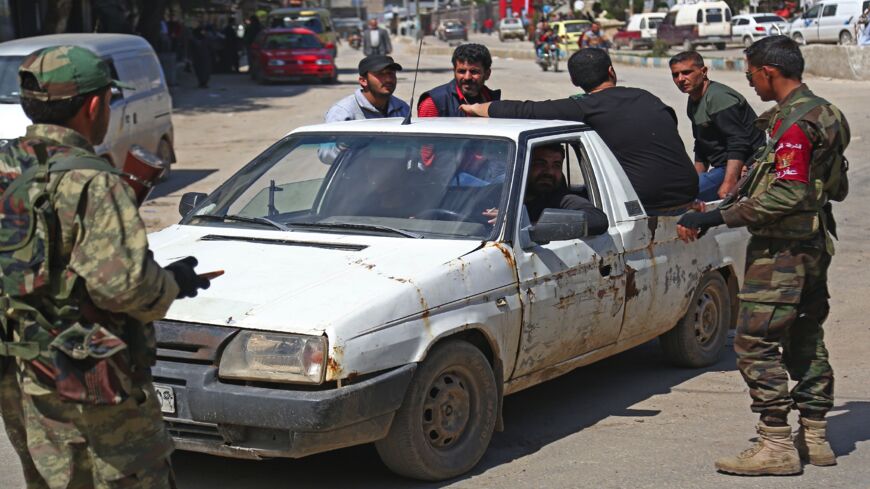 Turkish-backed policemen man a checkpoint in the northwestern Syrian city of Afrin on March 31, 2018. - NAZEER AL-KHATIB/AFP via Getty Images

A displaced person from eastern Ghouta who witnessed the incident told Al-Monitor on condition of anonymity that a fistfight first erupted between members of the civilian police and the military police before it culminated in a shootout near Al-Mowasalat Street in the center of Afrin. Another clash erupted nearby between people standing in queues to receive aid, he added.

The source said each of the fighting factions called for reinforcements to the scene to contain the violence. Reports later circulated that those who initiated the clashes were arrested, according to the source.

This is not the first case of infighting between the Syrian factions allied with Turkey in north Syria. There have been several deadly incidents leading to casualties in the past period. Most recently, two members of the Syrian National Army were killed during clashes between the army’s factions Feb. 12 in the Aleppo countryside.

The displaced person recalled, “I saw a fistfight, heard men shouting and throwing insults at each other in the middle of the road. Then violence escalated into a shootout and the military police killed two members of the civilian police. We have become accustomed to these kinds of clashes here. The smallest altercation, even between teenagers, can turn into a violent shootout in an instant.”

He added, “We fear anyone who claims to be a military person or carries a weapon in the city. We witness bombings and killings on a daily basis. A while ago, a series of explosions targeted popular markets. We fled the bombing in eastern Ghouta in the countryside of Damascus, and we came here seeking safety for ourselves and our children. Alas, every day we wake up to fighting and to the sounds of uncontrollable clashes.”

The source urged the responsible parties who claim to want to instill peace in Afrin and the countryside of Aleppo to rid the city of military police members and impose tighter control.

According to the Syrian Observatory for Human Rights (SOHR), a woman was injured in the Feb. 22 shootout and transferred to a hospital. No information was provided on her health condition.

In another report, the SOHR quoted reliable sources as saying that 85 members of the civilian police, including five officers of the special forces, resigned after two of its members were wounded by the military police’s gunfire.

Earlier in February, the military police stopped trucks belonging to the nongovernmental organization Shafak, which provides humanitarian aid loaded with food baskets, at the checkpoint to the entrance of the city of Afrin under the pretext of inspection. The members unloaded and destroyed 350 food baskets at the orders of their leader, Mohammed Hamidin, nicknamed Abu Riyadh, according to local news website Orient News Net. Shafak had earlier refused to grant the same food aid to the military police.

The military police has become known for its repeated violations against civilians and their properties in the city of Afrin. The faction has been making arbitrary arrests, committing torture in prisons that often leads to death, and robbing people’s properties under various pretexts, according to local testimonies documented by activists on social media.

In November 2021, activist and chanter of the Syrian revolution Abu Raad al-Homsi was beaten by members of the military police for allegedly disrespecting the militia leader amid the absence of an unbiased judiciary in the areas under the control of the Syrian National Army.

As of May 2018, in the wake of Turkish forces’ control of the city of Afrin after Operation Olive Branch, Afrin and its countryside, as well as adjacent areas in the northern countryside of Aleppo, have come under control of Turkish-backed armed opposition factions.

Since then, the area has been in a state of security chaos amid frequent bombings on a weekly or even daily basis, even in most crowded and vital places for civilians. According to local testimonies, clashes are ongoing between factions while Turkish security authorities present in the area stand idle. Meanwhile, these altercations keep claiming civilian lives. On Aug. 9, 2021, eight civilians, including two children and a woman, were killed in Afrin in violent clashes between factions that used machine guns and rocket-propelled grenades.