Hamas distances itself from protests against Iran, Gulf

Islamic Jihad in the Gaza Strip organized protests against Saudi Arabia and the United Arab Emirates, while others burned pictures of Shiite leaders during another demonstration, prompting Hamas to condemn both for fear of losing Arab support for the Palestinian cause. 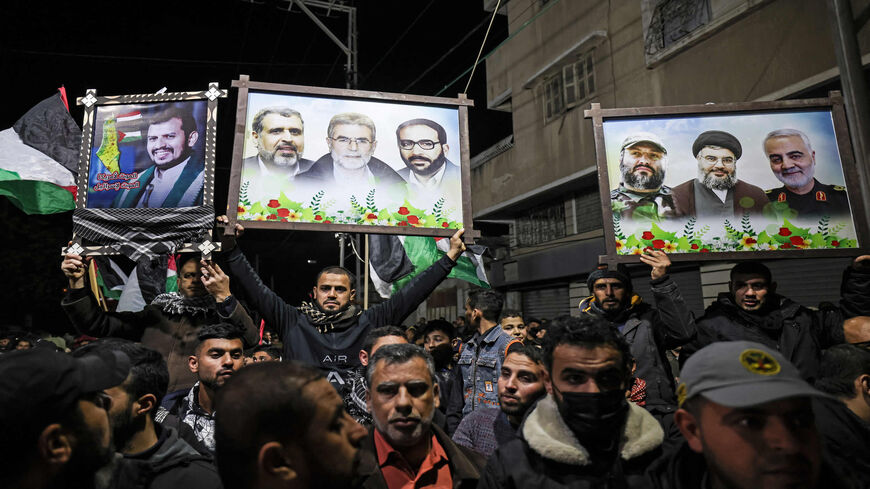 Khaled Abu Seif, board member of the Ibn Baz Charity Association, told Al-Monitor that this demonstration “expressed the feelings of hundreds, even thousands, of our people who reject the interference of Iran and its Shiite axis in Sunni countries.”

He said, “[Iran’s] interference has caused misfortunes for Muslims, mainly the displacement of hundreds of thousands of Syrians from their lands. So we organized this demonstration in support of the Syrian refugees and to tell Iran that enough is enough.”

Earlier on Jan. 22, Islamic Jihad organized a protest in Gaza City against Saudi Arabia and the United Arab Emirates (UAE), during which protesters chanted slogans against the House of Saud and the Zayed family, and carried pictures of Yemeni Houthi leader Abdul-Malik al-Houthi, Soleimani and Nasrallah, glorifying them.

Meanwhile, it seems that Hamas, which rules the Gaza Strip, is trying to find a middle ground; it maintains good relations with Iran and its axis that supports the Palestinian resistance, while steering clear of antagonizing Gulf states, most notably Saudi Arabia and the UAE, which are among the most prominent countries supporting relief efforts for the Palestinians.

In a Feb. 3 statement, Hamas condemned the burning of the pictures of Lebanese and Iranian Shiite leaders in Rafah, and considered this behavior to be “contrary to the values of our people, who aspire for the whole nation to stand with Palestine, its people and its just cause.” It stressed that Iran’s and Hezbollah's support for the Palestinian resistance “is something to be thankful for.”

Hamas also denounced in a Jan. 23 statement the protests against the Gulf countries and stressed that the slogans that were chanted “do not reflect the movement’s position,” stressing that it does not interfere in the internal affairs of any country.

A source from the Hamas leadership told Al-Monitor on condition of anonymity that security officials in Gaza have warned the Ibn Baz Charity Association that it would shut it down and arrest its members should such demonstrations be repeated.

He said, “On the other hand, political leaders in Hamas criticized Islamic Jihad [for its anti-Gulf protests] and asked its leaders to never hold such protests again.”

The source noted, “Hamas is trying to provide maximum freedoms in Gaza, but freedoms must not be misused in a way that harms our Palestinian cause, which revolves around the conflict with Israel.”

Hamas leader Yahya Moussa told Al-Monitor that his movement rejects any alignment with any Arab and Islamic axis against another.

He explained that Hamas maintains good relations with all Arab and Islamic regimes and peoples, noting, “Our appreciation for Iranian support for the resistance cannot be translated into hostility with any other country. We are not with anyone against anyone, and our only enemy is Israel.”

Moussa stressed that Hamas distances itself from conflicts and disputes between Arab and Islamic countries and refuses to be a party to them, or to support one party at the expense of the other.

“We believe that Israel is behind all these conflicts in the Arab region; the ongoing sectarian conflicts in the region serve to divert the world's attention from the Palestinian cause,” he said.

Moussa noted that his movement receives Iranian support without any conditions or demands, and also adopts a policy of openness to all countries and peoples around the world, to achieve balanced ties that have a positive impact on the Palestinian cause.

Talal Okal, political analyst and writer for the Palestinian Al-Ayyam newspaper, told Al-Monitor, “In general, there is a Palestinian division between supporters and opponents of Iran and its Shiite axis in the region, but it does not rise to the level of either loyalty or hostility to Iran and its axis.”

He pointed out that the Palestinians' need for international financial and political support to manage the conflict with Israel forces them to distance themselves from such practices that took place in Gaza City and Rafah.

Okal warned against the Palestinians expressing loyalty to regional axes at the expense of others. “This can only result in losses in terms of financial and political support, not gains.”

Walid al-Mudallal, professor of political science at the Islamic University of Gaza, told Al-Monitor that Hamas' stance against both events “shows wise behavior by the movement that runs the Gaza Strip.”

He said, “Since it controls Gaza, Hamas is forced to bear the responsibility for such events that took place in its cities and it must make sure such practices stop once and for all.”

Mudallal noted, “The Palestinians who are engaged in a political and existential conflict with Israel are required not to be hostile to any other country, and at the same time we must thank every country that provides any type of support.”