The protesters gathered in downtown Tunis on what marked the 11th anniversary of the uprising that toppled Tunisia's former dictator. 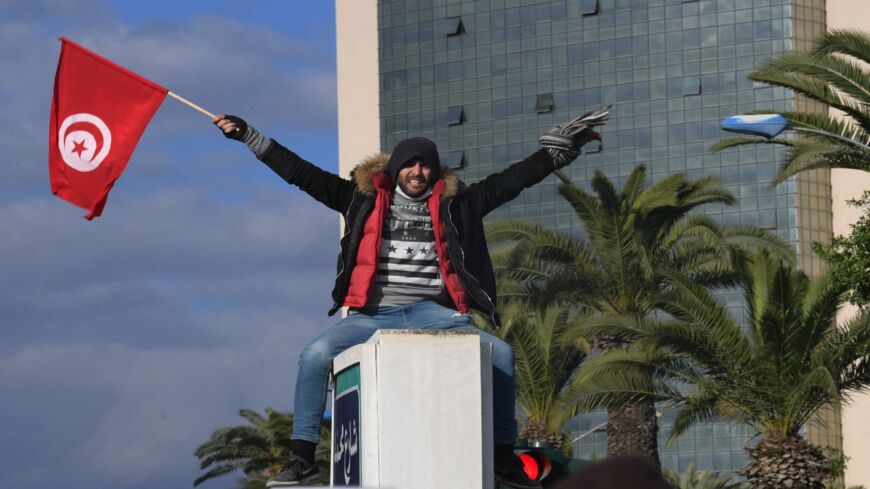 A Tunisian demonstrator waves his country's national flag during protests against President Kais Saied on the 11th anniversary of the Tunisian revolution in the capital, Tunis, on Jan. 14, 2022. - FETHI BELAID/AFP via Getty Images

Hundreds of anti-government protesters in Tunisia who took to the streets on Friday demanding the removal of President Kais Saied were met with water cannons and tear gas from police on Friday.

Demonstrators in downtown Tunis were trying to reach Habib Bourguiba Avenue, the site of the 2011 Arab Spring revolution, but were prevented by police who surrounded the area ahead of the planned protest. Jan. 14 marked the 11th anniversary of the uprising that toppled former Tunisian dictator President Zine El Abidine Ben Ali and introduced democracy to the North African country.

Protesters took to the streets on Friday demanding the resignation of Saied, who in July carried out a series of political maneuvers his critics said amounted to a coup. Upon assuming executive authority, Saied fired former Prime Minister Hichem Mechichi, sacked other top officials, took control of the judiciary and suspended the elected parliament.

Two months into his power grab, he appointed relative political newcomer Najla Bouden Romdhan as the country’s first female prime minister. Saied’s actions initially had widespread public support, but his approval numbers are sinking as discontent with the economy and his handling of the coronavirus crisis grows.

Bloomberg reports there were no immediate reports of casualties or arrests on Friday. The Tunisian Interior Ministry said an estimated 1,200 participated in the protest in violation of new COVID-19 restrictions.

On Wednesday, the presidency announced a two-week overnight curfew and ban on public gatherings. Critics saw the restrictions, which took effect a day before Friday’s protest, as an effort to silence protesters.