The government ordered a total lockdown on Jan. 14. What should have been a celebration of 10 years of democracy turned into a clampdown under the pretext of COVID-19 sanitary measures. The country exploded in angry revolt with running battles with police in the burning nighttime streets of popular neighborhoods across Tunisia. 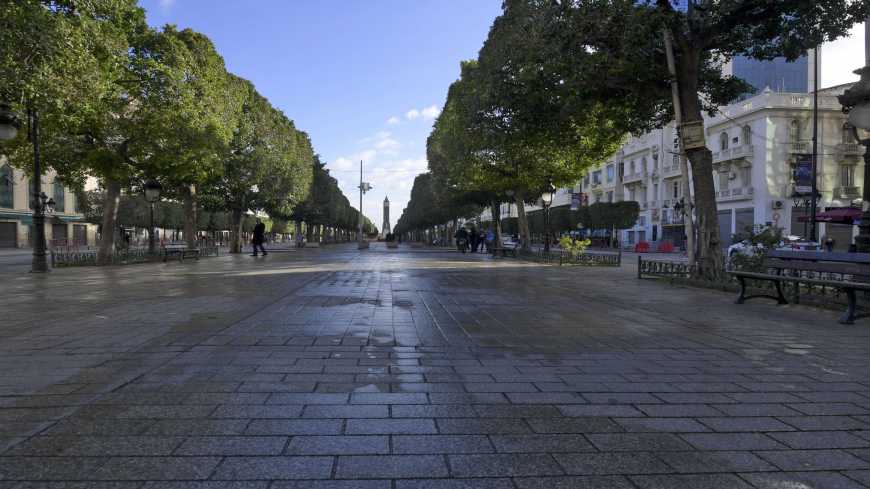 Tunis' famous Habib Bourguiba Ave. is pictured empty amid a lockdown due to the Covid-19 pandemic on Jan. 14, 2021, as Tunisia marks 10 years since its revolution. - FETHI BELAID/AFP via Getty Images

Jan. 14, 2021, should have been filled with the joyful celebrations of 10 years of democracy following the 2011 popular Jasmine Revolution that ousted President Zine Abedine Ben Ali. Instead, politicians currently in power who benefited from the revolution face the same anger and unrest from the children of that very revolution.

Winter is Tunisia’s traditional season of discontent. As 2021 began, the country was in an ugly mood. The Tunisian economy had shrunk by 9% in 2020, some industries such as tourism have been all but destroyed, while people have had to endure strict enforcement of curfews under the COVID-19 restrictions, rising food costs and unemployment.

In what was seen as a peremptory move to prevent demonstrations, Tunisia’s Health Minister Fouzi Mehdi announced a four-day lockdown on the pretext of COVID-19 sanitary restrictions starting Jan. 14, effectively canceling the 10th anniversary celebrations of Tunisia’s popular revolution.

Determined to demonstrate on Jan. 14, the wounded martyrs of the revolution were not fazed by the lockdown. The families of activists who lost their lives at the hands of the police during the 2011 revolution have been campaigning for the publication of an official and definitive list of revolutionary martyrs and for their deaths to be acknowledged by the state. However, when they arrived at the central avenue of Habib Bourguiba, they were forced back by police.

The lockdown left youths in the poor neighborhoods in Tunis discontent. Youths from marginalized neighborhoods such as Ettadhamen and Kabaria set tires on fire in the streets and went to war against the police. Night after night, youths have been setting the streets alight, looting supermarkets and fighting with the police. The police replied with beatings, tear gas and mass arrests.

Romdhane Ben Amor of the Tunisian Forum for Social and Economic Rights told Al-Monitor there are no exact figures even on the Ministry of Interior website, but “the estimation is that there have been around 1,300 to 1,400 arrests of which some 30% to 35% are minors.” He said, “There are the testimonies from the young people who have been freed that they have been detained alongside adults and [experienced] aggressions and threats from guards.”

Protests since then have split between daytime protests by self-identified political activists, who are mostly middle class and demand a fundamental systemic change. Among them are new movements of young people inspired by the Antifa movements they’ve seen on the news. Tech-savvy, they call themselves The Wrong Generation and are developing new ways to be heard peacefully, yet still — like the ultra-violent nighttime youth in deprived neighborhoods — The Wrong Generation is being chased by police and their allies and arrested and detained for days in appalling conditions.

Nighttime protestor and activist Oussema Dhari, from the marginalized suburb of Raoued in Tunis, told Al-Monitor, “People from the ordinary ‘hoods’ and the Ultras have a real hatred of the police; we are angry and we want our revenge, and we don’t want anything in return.” He said they prefer to protest in their neighborhoods because “it’s their safe zone, where they have an advantage over the police.” He says the lockdowns have had a detrimental effect on society. “Our daily rhythm has been ruptured, even sitting in a cafe is impossible now. I don’t feel like a citizen now.”

A 17-year-old skateboarder from Denden suburb in Tunis told Al-Monitor, “The 15- to 19-year-olds are stigmatized by the way we dress. When we walk in the streets the police always hassle us, saying ‘Who are you? Where are you going?'" He said skaters, in particular, suffer: “They (the police) broke my first board and they tried to knock people off their skateboards.”

Political reactions have been mixed. President Kais Saied tried to calm the nation by appealing to the people not to go out at night or damage property. But members of the government have chosen to provoke fear in the public's mind, with Defense Minister Brahim Bartagi warning of terrorist elements among the night protestors and Prime Minister Hichem Mechichi vowing to deploy security forces in the neighborhoods.

However, in the post-Ben Ali era, violence committed by the police is quite clear. Videos circulating on social media and by liberal news channels show the police firing huge amounts of tear gas in neighborhoods, fogging out whole streets and even firing cans into family homes.

Nawres Douzi of the Tunisian League of Human Rights, which has publicly denounced the levels of violence, told Al-Monitor there had been “1,300 arrests in the capital alone.”

Not all of the protesters were arrested during the actual protests. Latifa Madani, a 53-year-old mother, told Al-Monitor a friend of her son’s came to their house in the old quarter of Bab Khadra to escape the police during a night protest. She said police kicked in her front door and ran into the living room to take her son and his friend. “I tried to protect my child, but they pointed a gun at me and took my son Raed (18 years of age)." She said her son had been at home and the police also tried to take her other boy, 16-year-old Khalil, who has severe autism. She has not seen her son since his arrest.

Human rights lawyer Yassine Azarara told Al-Monitor that on Jan. 20, six minors received jail sentences of two years each in the court of Bizerte. Walid Araoui, founder of the Association for Equitable Judicial Process, told Al-Monitor they were concerned about the rapidity of the legal process. “We have seen those accused go from being arrested to charged by the public prosecutor to being convicted in the space of one hour.” In a press conference on Jan. 21, a coalition of leading civil society members launched a campaign to have all charges against the young protesters dropped.

Jan. 23 saw a demonstration that protestors described as being the march "postponed from Jan. 14." Habib Bourguiba Ave. was saturated with riot police in Arquus armored vans that had been freshly delivered from France as part of a new 60-vehicle fleet of armored riot trucks and a refurbished water cannon.

Protestors chanted “Degage!” (French for "Get out") and “[Rachid] Ghannouchi, you broke the law!” and demanded real sovereignty for the Tunisian people. Activist Jawaher Channa, 33, who was injured during the revolution, told Al-Monitor she believed “the government is nervous and afraid.”

Older activists who had opposed Ben Ali and the Jasmine Revolution generation marched alongside young people, most of who barely remember the revolution and grew up in the democratic second republic. Amel, a 20-year-old interior design student, said, “I’m just an ordinary person. I’m not politically cultured. But I felt the responsibility for the future of my 14-year-old brother to be here.”

Ofram Sfara, a 23-year-old journalism student, told Al-Monitor, “We want the system to be changed for the same reasons as the first revolution. We used to be afraid to even say the president’s name, but now the freedom of speech we won is under threat.”

Firas Bejaoui, a fellow journalism student, said, “We want them to defund the police; they spend and spend on security when they should be spending money on students. We want to burn down the fascist police state.”

Zouhaiya, 23, who is studying electronics, said, “There are many people suffering; they can’t afford to buy anything. We cannot live like this anymore. They kidnap people from their homes. We say stop lying to us. Stop the bulls**t. We know everything; we know all about the corruption. We are tired of them treating us like we are donkeys.”

As demonstrations continue, the main focus is to get justice for the minors arrested and to see meaningful change in the state and the policing. Jan. 26 will see both the parliament vote on the prime minister’s proposed Cabinet reshuffle and a popular march from the neighborhood of Hay Ettadhamen, where much of the rioting has taken place, to the House of Representatives in Bardo, Tunis.