After five years of investigating cases of corruption and human rights abuses under former dictator Zine El Abidine Ben Ali, Tunisia’s Truth and Dignity Commission is concluding its mandate, though many say there is still much more to do. 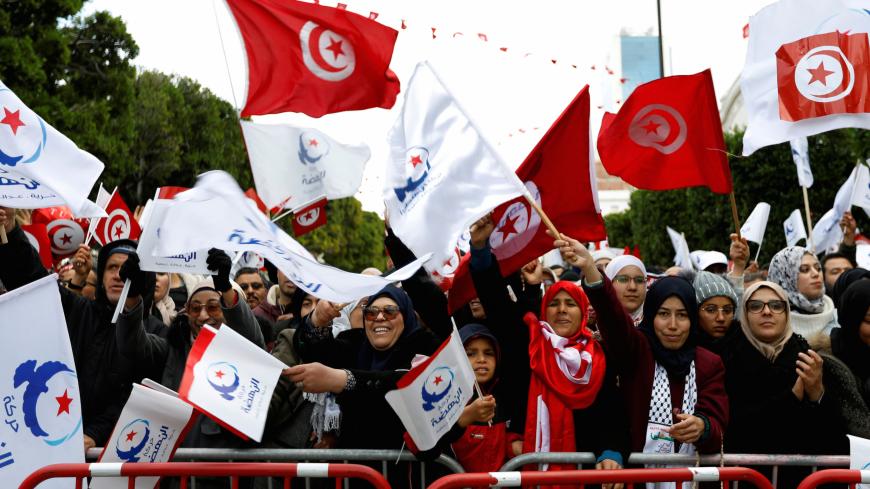 TUNIS, Tunisia — Basma Balaai was 17 when she first got involved in charity work through a mosque in her native village of Menzel Bouzelfa, near the Mediterranean coast. “I believed I was doing good, serving free meals to the poor,” she said. But Tunisian dictator Zine El Abidine Ben Ali disagreed. Like countless others, Balaai was imprisoned and tortured along with immediate family members for “terrorist” activities. “I was flogged, kicked and sexually abused for days on end," Balaai, now 54, told Al-Monitor. "I cannot have children because of what they did to me. They were unspeakable things.” Balaai now joined fellow citizens in a march along Tunis’ main Habib Bourguiba Avenue on Jan. 14 to mark the eighth anniversary of the Jasmine Revolution.

Tunisia is the sole democracy to emerge from the Arab Spring protests that ripped through the region over the past decade. Protests began after Mohamed Bouazizi, an impoverished young Tunisian fruit vendor sick of corruption and police harassment, set himself on fire. Eight years on, many of the same problems that drove Ben Ali’s fall — such as rampant graft and youth unemployment — persist, casting a dark shadow over Tunisia’s infant democracy. Last month a struggling journalist in Kasserine, a perennially neglected backwater bordering Algeria, burned himself to death to protest the lack of change. Anti-government protests are erupting with greater frequency. Allegations of police impunity continue to fuel resentment. "ACAP," the acronym for "All Cops Are Bastards," inspired by the eponymous Italian movie, is scrawled across many walls in the country.

Yet Balaai, who spent long nights paralyzed by the screams of her younger sister as she was tortured in a neighboring cell, does see the light. “My family was destroyed," she said, "but I have faith in hai’at al-haqiqa wa al-karama.” She was referring to Tunisia’s Truth and Dignity Commission, the body that was set up in December 2013 to document the mountain of human rights abuses and corruption cases that occurred from 1955 to 2013. A staggering 50,000 cases, each more gruesome than the next, have been filed with the commission, commonly referred to by its French acronym, IVD.

While fellow Arab Spring states have succumbed to war and repression, the IVD remains a potent symbol of Tunisia’s fight to cement a culture of accountability and rule of law. On Dec. 31, the body’s steely president, Sihem Bensedrine, submitted a report of the IVD’s findings to the country’s president, Beji Caid Essebsi, along with a set of recommendations on how to proceed. The dossier is the fruit of five years of painstaking excavation, which saw victims, among them Balaai, describe, on live national television, the horrors they endured.

What happens next is a critical test of where Tunisian democracy is headed. “The IVD and transitional justice represent the moral high ground in the public space," Bensedrine told Al-Monitor at her office in Tunis. "You have to pick your sides. Either you take the necessary measures [to address the report’s findings] or you are in the other camp."

It's a “highly complex” process, she said, but several things need to happen if justice is to be served. At a minimum, some 50,000 bona fide victims must be officially recognized and receive financial compensation. Bensedrine said she would ask the World Bank for help. The state has to formally apologize to all the victims and clear their names. Medical treatment must be offered where due. Then there is the work of the independent special courts set up to prosecute cases where the worst violations occurred. At least 150 cases have been referred to these courts, with 30 cases already underway. And since June, a trickle of perpetrators who long resisted facing their victims have yielded to threats of detention and begun appearing in court

The government has a year to come up with a working plan based on the IVD’s recommendations.

But with parliamentary elections due to be held in November, chances of implementation between then and now remain slim. Yet implementation is key. “Shining this bright light on Tunisia’s past is an essential part of transitional justice," said Amy Hawthorne, deputy director for the Project on Middle East Democracy, a think tank in Washington DC. "But the next phase, accountability, is perhaps even more crucial — cases need to be tried in court, perpetrators punished and victims compensated."

There have been no convictions so far. “It's too early for that,” Bensedrine said. “But victims are saying, ‘I am experiencing something very important to me. … The guy who tortured me is now before me in court and accountable for what he did to me,’ and this is very important to victims. It's cathartic. It brings a measure of inner peace.”

But the “other camp” — holdovers from the “ancient regime” who oversaw the crimes, and their allies in the business elite — is digging in. Essebsi, who served in prominent positions under the country’s founding strongman Habib Bourguiba, then Ben Ali, is at the vanguard of efforts to castrate the IVD. He has shunned its hearings and tried unsuccessfully to cut short its mandate. Essebsi scored a big win, however, when his long-touted “reconciliation bill” granting amnesty to crooked officials who returned their loot was adopted by the parliament in September 2017. The policemen’s union has, meanwhile, darkly hinted that its members could not guarantee the safety of those attending the hearings because they would not serve in a courtroom where their colleagues were being unjustly tried. “The president encouraged impunity,” said Bensedrine. His election as president in November 2014 and the victory of his former party, the ruling, pro-establishment Nidaa Tounes in parliamentary polls held a month prior, had ushered in the return of the “deep state.”

Shockingly perhaps for many of its supporters who bore the brunt of Ben Ali’s barbarity, the Islamist Ennahda party backed the measure as well. Ennahda leader Rachid Ghannouchi defended the move in an interview with Al-Monitor. Speaking through his daughter, he recalled that Ennahda created the Ministry of Transitional Justice when it became the first political party to govern post-revolution Tunisia in 2011.

“For us, [transitional justice] is about comprehensive reconciliation, not punishment or retribution," he said. "It is about revealing the truth and encouraging perpetrators to acknowledge, and apologize for, their crimes and for victims to have their moment and forgive.”

Many view Ghannouchi’s actions as more cynical dealmaking. Since a bruising setback in the 2014 elections, Ennahda has played second fiddle in Nidaa Tounes' wobbly coalition, hewing ever closer to the mainstream in a bid to retain power. “If Mr. Ghannouchi would like to forgive the perpetrators, it's not up to him, it's up to the victims, and he is not the representative of all the victims,” said Bensedrine. “We can’t have reconciliation without accountability. The objective is to protect the new institutions, to protect democracy, to ensure that such institutionalized evil does not recur.”

The former journalist’s sharp tongue has won her many enemies, easing their efforts to shift the focus away from the crimes that have been exposed to her alleged flaws. Controlled by a panoply of business tycoons, sections of the pro-establishment Tunisian media have propagated wild tales about Bensedrine. The 69-year-old mother of four is variously accused of dipping into the IVD’s funds and of being a “prostitute” and “spy.” It's hardly surprising that the old guard wants to shut her up, she said. “Our main finding is that if Tunisia is now in this economic and social crisis it's because of corruption, and corrupted people are still in power now and they are trying to influence the government and they are trying to protect their interests.”

On Jan. 14, prominent civil society groups Al Bawsala and I WATCH filed a criminal complaint against Essebsi for abuse of power for having expunged a former education minister under Ben Ali of corruption charges. The move came days after the same groups filed similar charges against Prime Minister Youssef Chahed for seeking to lift the asset freeze on Ben Ali’s former son-in-law, Marouane Mabrouk. The businessman, who is alleged to have vastly profited from the sale of state-owned holdings, divorced Ben Ali’s daughter the day after the revolution. “It was utterly disgusting,” said Bensedrine.

Some say the fact that Bensedrine was jailed under previous dictatorships — most recently for calling out Ben Ali’s nephew for corruption — blots her impartiality. “She is too confrontational," charged Leila Chettaoui, a prominent secular opposition lawmaker. "The IVD should be about reconciliation. Bensedrine has had a polarizing effect."

Others take aim at what they call an authoritarian streak. Lamine Benghazi, a British-educated political scientist, who helps runs Al Bawsala, told Al-Monitor, “Her style is very problematic. She threatened to reveal the findings of her report to the public if the president refused to receive her, thereby creating the impression that these were open to negotiation. It was a mistake.”

Bensedrine dismisses such critiques along with rumors that she will run for office. “Politics is too dirty,” she said. "The public hearings brought together victims from a broad cross-section of ideologies and repression spanning six decades of dictatorship. If anything, the IVD united people in their pain.” Khmeis Arfaoui, a left-wing activist who now teaches at Tunis University, was one of them. An expert on the country’s communist labor movement, Arfaoui was arrested in the '90s and tortured for days. “They whipped me, waterboarded me and made me remain in the roast chicken position,” he told Al-Monitor, referring to the practice of forcing prisoners to crouch with their hands and feet bound. “Have you tasted roast chicken?” he asked with a bitter grin. “Of course we seek justice.”

He may not get it. Hawthorne shared the growing worry, in emailed comments to Al-Monitor, that “figures from the Tunisian old guard who are now politically ascendant will thwart these processes, rendering the IVD’s legacy incomplete.” But Bensedrine remains stubbornly optimistic about Tunisia’s future. “What we gained in this process of transitional justice is an independent judiciary. The executive has no power over them. They are the only ones who can turn to the crooks and say, ‘Come here and give back the money.'"