Tunisians took to the streets to protest the government’s state budget and austerity measures, leading to violent clashes that raised concerns about a repeat of the bread riots of the 1980s. 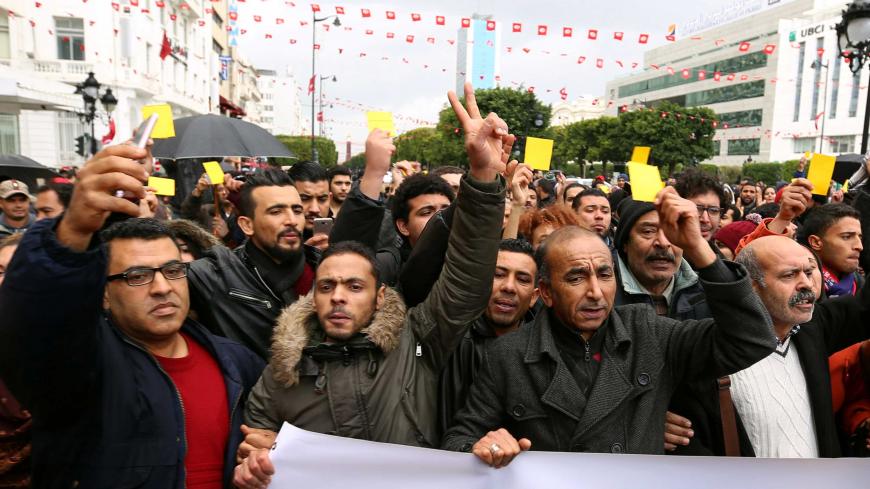 TUNIS, Tunisia — The Tunisian capital as well as other governorates have been rocked by widespread protests since Jan. 3, which descended into acts of vandalism and looting, over the government’s austerity measures that came as part of the finance law of 2018, which became effective at the beginning of January.

Under the law, there has been an increase in price of consumer goods that included fuel, medicine, electricity and food (but not bread); additional taxes also were imposed. Pro-opposition parties warned against new bread riots against the government measures. The bread riots swept Tunisia at the end of December 1983 and culminated on Jan. 3, 1984, when dozens of demonstrators were shot dead by security forces.

On Jan. 13, the government announced a $70 million reform package to increase aid to citizens in need and access to health care.

Clashes erupted in several Tunisian cities between protesters and security forces, which led to the death Jan. 8 of a young man from Tebourba, west of the capital, Tunis, as a result of gas suffocation when the police tried to disperse a group of protesters using tear gas, according to a statement by the Tunisian Interior Ministry.

Meanwhile, over 800 people have been arrested and 50 policemen injured, amid the deployment of the Tunisian army to protect governmental institutions and headquarters Jan. 10.

The protests broke out Jan. 3 — following calls on social media networks and the emergence of an online young people's movement dubbed What Are We Waiting For? — in tandem with the anniversary of the bread riots.

In late 1983 and early 1984, Tunisians flocked to the streets in the southern part of the country after the government under late President Habib Bourguiba announced an increase in price of basic items such as flour and bread. The protests culminated in the deaths of dozens of demonstrators who were shot by the security forces in several cities. This pushed Bourguiba to cancel all austerity measures under a presidential decree.

The Tunisian pro-opposition party Beni Watani, in a Jan. 3 statement, warned the Tunisian government of repercussions from the increased prices of consumer goods, which could lead to a revolt similar to that of the 1980s. The party called on the government to “read and learn from the history of the country, especially given the similar reasons behind the 1984 crisis and the current anger wave."

Anis al-Harathi, an activist and leader in the What Are We Waiting For? group, told Al-Monitor that the protests were intentionally launched Jan. 3 to remind the people of what happened on that date in 1984, stressing that the same dark political climate and the deteriorating economic situation that characterized that black period of the history of Tunisia are unfolding now — but are even harsher on the pockets of Tunisians.

He said the movement will continue to encourage peaceful protests until the finance law, with all its measures allowing price and tax increases, is rescinded.

Ammar Amrousieh, an activist and a leader in the Popular Front — a left-wing party bloc and one of the most prominent supporters of What Are We Waiting For? — said his party will continue protesting and galvanizing public mobilization in the street to pressure the government to reverse its measures.

In an interview with Al-Monitor, Amrousieh blamed what he called failed government policies for the deteriorating economic and social situation, stressing that his party had warned the government of the repercussions of the finance law when it was discussed in parliament. “The law is a barrel of gunpowder that exploded in the face of the government,” he said.

“All protests will cease when Prime Minister Youssef Chahed follows in the footsteps of Bourguiba and annuls the new prices,” Amrousieh said.

Many political parties have called upon Chahed to annul the finance law, including parties from the ruling coalition that voted for the law in parliament such as the Ennahda movement. Maniya Ibrahim, a leader in Ennahda, called on Chahed via Jawhara FM radio on Jan. 10 to review the measures in the new budget.

Chahed had accused the Popular Front of stirring up the social situation, inciting violence and serving certain political agendas by voting for the law and then protesting against it. In a statement to Tunisian Mosaic Radio on Jan. 10, he said that his government respected the right to protest and understands the people’s demands and grievances about the high cost of living, but that he considered the austerity measures as difficult economic reforms necessary to improve the economic situation.

Rida al-Saidi, an economic adviser to the prime minister, told Al-Monitor that the austerity measures in the finance law are necessary given the pressures and constraints at home and abroad, stressing that there is no way to go back on them.

Saidi said that the debt is 70% of gross domestic product and that the state budget deficit reached a record 6.1% of GDP in 2017. He said Tunisia has made pledges to the International Monetary Fund (IMF), the World Bank and other foreign financiers to reduce public expenditures in a package of comprehensive financial reforms in order to obtain several international loans to revive its treasury. These include a $320 million third installment of an IMF loan and a $500 million World Bank loan.

On Jan. 14, Tunis commemorated the seventh anniversary of the outbreak of the Dignity Revolution, which led to the ouster of Zine El Abidine Ben Ali in 2011. This commemoration came amid fears that the economic crisis that has been plaguing the country will further deepen and that social conditions could explode out of control.