An attack on US diplomatic offices in Baghdad widely assumed to have been by Iran-linked militias injured Iraqi civilians instead, as Kataib Hezbollah blamed foreign powers. 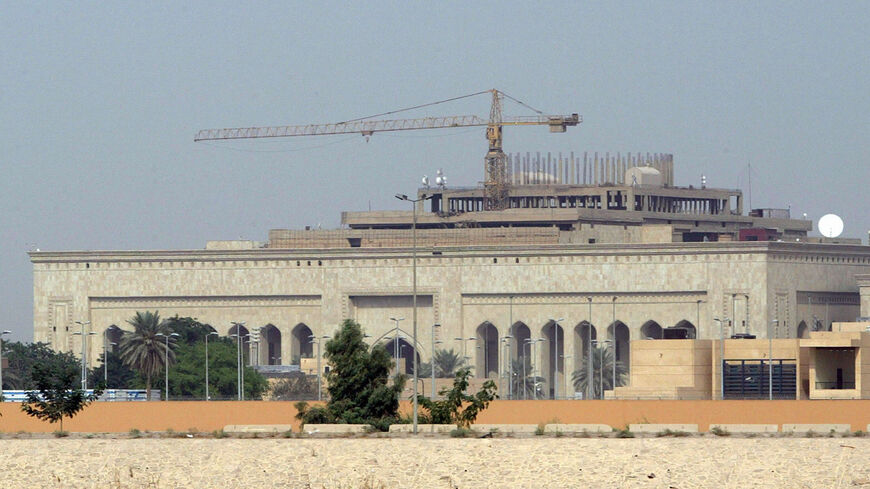 The new US Embassy complex, still under construction, is seen in the heavily fortified Green Zone, on the west bank of the Tigris River, Baghdad, Iraq, Oct. 11, 2007. - STR/AFP via Getty Images

BAGHDAD — An arch of red lights flashing across the night sky of the Iraqi capital on Jan. 13 evinced a large quantity of counter-rocket projectiles shot at incoming rockets from a position in the heavily fortified Green Zone.

At least four rockets were fired: three reportedly hit within the perimeter of the US Embassy while another hit a school in a nearby residential complex, injuring a woman and a girl.

The rocket attack, widely assumed to have been carried out by men linked to Shiite armed groups known for conducting similar attacks over many years, ended up hurting Iraqi civilians instead of embassy staff or foreign forces.

In other similar incidents targeting US forces and diplomatic offices in Iraq, women and children have also been killed.

Sirens of police vehicles were repeatedly heard in central Baghdad late into the night following the attack, which occurred on the first night of the Iraqi weekend, as men got haircuts at barbershops open until midnight and families sat outside on the sidewalks.

Meanwhile, the government-linked Iraqi Security Media Cell posted photos of the damage to civilian property by the rockets, noting that the rockets had been launched from Baghdad’s southwestern area of Dora.

The information service called it a “cowardly terrorist act” on Twitter, prompting one commentator to pointedly ask whether the use of that word meant “that a military operation will be launched against the ‘terrorists’ who fired the missiles.”

Iraq’s counterterrorism services have mostly been used to track down, capture and kill those suspected of involvement in the Islamic State (IS) and not Shiite armed factions linked to Iran.

They were, however, also used in a raid on June 26, 2020, to arrest over a dozen Kataib Hezbollah fighters in a Popular Mobilization Units (PMU) headquarters in southern Baghdad.

The arrest came shortly after Prime Minister Mustafa al-Kadhimi took office in May of that year. Iran-linked factions were against Kadhimi’s bid for the post. Kadhimi is also being considered for a second term after the new parliament was sworn in earlier this month.

A Dec. 31 "deadline" for US troops to leave the country passed with little to show for the revenge vowed by Iran-linked factions, which seem to have weakened in recent years but which are still clearly capable of carrying out attacks.

They were widely blamed for an assassination attempt on Kadhimi in early November 2021.

A member of the political office of one of these groups — Kataib Sayyid al-Shuhada — claimed to this journalist at that time that the attacks had been “staged” and that it was all “a charade” to “silence civilians who died as a result of an attack on the demonstrations” against the voting results.

Shortly after the Jan. 13 rocket attack, a Kataib Hezbollah spokesman known as Abu Ali al-Askari claimed that “the firing of [stray] rockets into residential areas under the pretext of targeting the embassy is nothing but a deliberate targeting of civilians.” He accused “gangs linked to the UAE and Britain” of being behind it.

Popular Shiite cleric Muqtada al-Sadr, whose political party won the largest number of votes in the October 2021 elections, said instead in relation to the attack, "There are parties claiming to be the resistance and claiming to hit the US Embassy in the Green Zone, and they have injured civilians, children, women and destroyed the edifices of science and education.”

He warned, "The people should not be deceived by such movements. They are doing this in order to delay the withdrawal of US forces from Iraq in order for them to have an excuse to use weapons, and the fate of the people remains in their hands. There is no existence for them without the presence of the occupier."

“The U.S. Embassy compound was attacked this evening by terrorist groups attempting to undermine Iraq’s security, sovereignty and international relations. We have long said that these sorts of reprehensible attacks are an assault not just on diplomatic facilities, but on the sovereignty of Iraq itself,” tweeted the US Embassy in Baghdad late on Jan. 13.

Meanwhile, as Al-Monitor had reported Jan. 12, the Iran-linked "muqawama" ("resistance") armed factions have also threatened to target not only US forces remaining but anyone seen as being allied with them, including Kurdistan Regional Government forces.

There were unconfirmed reports of at least one grenade and possibly more thrown at an office of the largest party from the Kurdistan Region of Iraq — the Kurdistan Democratic Party — in Baghdad earlier in the day on Jan. 13.

Some of the video footage that circulated of the Jan. 13 attack on the US Embassy showed the bright red lights of the missile defense system hitting the rockets in the sky behind Iraq’s new central bank tower, an iconic high-rise building still under construction and designed by the famed Iraqi architect Zaha Hadid as one of her last commissioned works prior to her death in 2016.

The bank tower is just down the road from both the high-security Babylon Hotel, often used for classy dinner receptions and conferences, as well as the popular Jadariya Floating Restaurant, where both Iraqi officials and ordinary families splurge on meals with views of the Tigris from across the river from the Green Zone.

Jadariya is also where some commanders of some Iran-linked armed groups have homes, as this journalist reported in 2020, and where mass protests have been held against the United States.

Many of these factions now have units incorporated into the government-salaried PMU, but they are either themselves classified as terrorist organizations by the United States or have leaders that are.

The central bank tower project was pushed forward despite investors’ concerns about the future of the country in 2015, in the throes of a war against IS. IS was officially declared defeated in Iraq in December 2017, but cells continue to conduct attacks.

Investment continues to be key for Iraq’s future, but such attacks also continue to threaten confidence in the country’s stability.