After several weeks of relative quiet, Israel now suspects that Hamas, Islamic Jihad, or both are trying to escalate pressure on Israel and on Egypt. 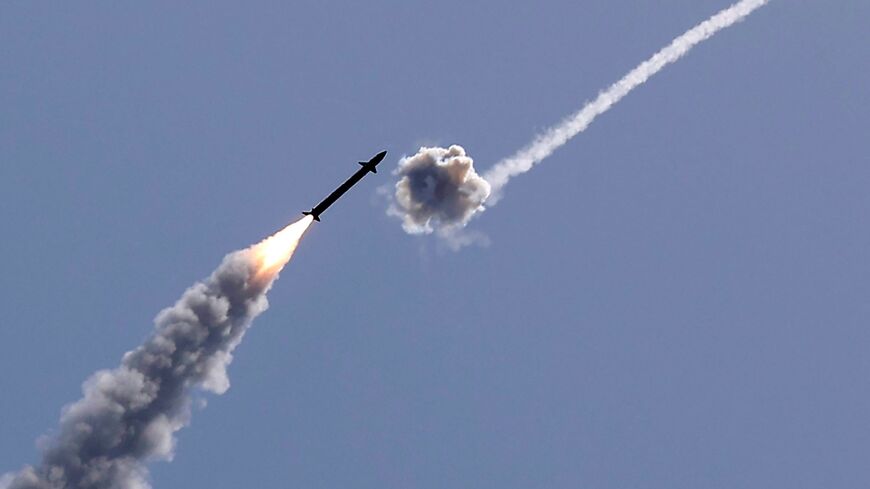 Israel's Iron Dome aerial defense system intercepts a rocket launched from the Gaza Strip, controlled by the Palestinian Hamas movement, above the southern Israeli city of Ashkelon, on May 11, 2021. - JACK GUEZ/AFP via Getty Images

Two rockets were fired the morning of Jan. 1 from the Gaza Strip towards Israel. The rockets exploded over the Mediterranean Sea, with no injuries or material damages registered. One detonated not far off the coast of Tel Aviv; the other exploded further away at sea. Since the rockets were far from urban centers, IDF Spokesperson Unit said, "According to protocol, no sirens were sounded and no interception took place."

No Palestinian group has taken responsibility for the rocket fire. Reportedly, Hamas passed a message to Israel via Egypt, claiming the launch was a result of a malfunction triggered by a lightning storm and was not instigated by the group. Still, reports in Israel claimed the Islamic Jihad was in fact behind the launch, with Hamas tacitly agreeing to the move.

The Israeli army retaliated by targeting Hamas rocket production sites as well as Hamas military posts along the Gaza border. Repeating its usual stance, IDF said it considers Hamas Gaza rulers as responsible for any attack against Israel emanating from the Strip. The IDF retaliation prompted in its turn a rare Palestinian reaction. Unidentified Palestinian militants fired Sam-7 anti-aircraft missiles at Israeli helicopters carrying out the strikes. None of the missiles hit the helicopters.

The Israel-Hamas ceasefire brokered by Egypt after the latest violence in May is evidently fragile. The border has been relatively quiet in recent months, except for two incidents. On Sept. 12, Israeli aircraft struck a series of targets in Gaza, while Palestinian militants launched rockets into Israel. And on Dec. 29, an Israeli civilian was injured by gunfire near the Gaza border. The man, employed a Defense Ministry subcontractor, was working on the recently completed underground and above-ground security barrier separating Israel and the Strip when he was hit. Israel responded with tank fire targeting several Hamas military sites.

Three years ago, Hamas also claimed that lightning caused missiles to be fired at the southern Israeli city of Beersheba. But then and now, the explanation does not seem to satisfy Israeli security experts. The incident could result from the apparent stalemate in Egyptian-mediated talks between Hamas and Israel for reaching a prisoner exchange deal and a long-term agreement. Or Hamas could be trying to pressure Israel and Egypt into advancing faster rehabilitation and development projects in the Strip, which are part of the mediated agreement talks.

Another explanation could be related to Islamic Jihad prisoner Hisham Abu Hawash, on a hunger strike in Israel for some 140 days now over his administrative detention. After the Jan. 1 rocket fire, Islamic Jihad threatened further violence should a hunger-striking Palestinian prisoner die of starvation.