In the space of a few months, Prime Minister Abdulhamid Dbeibeh has managed to anger many Libyan women. 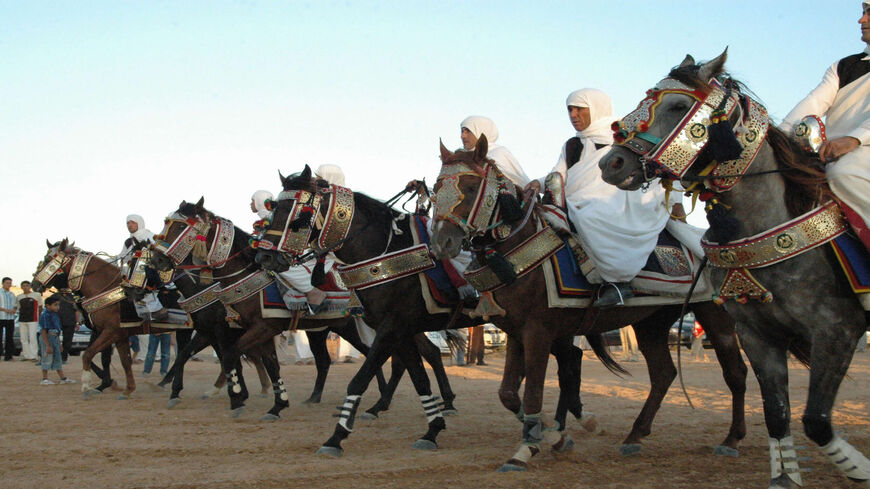 Libyan men in traditional outfits arrive on their horses during a group wedding ceremony held in the western port city of Misurata, Libya, Sept. 5, 2006. - Mahmud Turkia/AFP via Getty Images

Mass marriages are not unusual in conservative Libya as a way to help young couples tie the knot in a country where wedding expenses are often higher than many can afford.

Milad Said, economics lecturer at Bani Walid University, southwest of Tripoli, told Al-Monitor that a decade ago group weddings, in which dozens of couples would take part, are usually “donation-funded and organized by nonprofit organizations” with minimum financial support from the government. He said that such activities have never been a “government policy funded by public money.” However, he pointed out that back then money was put into better use like subsidized housing projects. A typical young Libyan is likely to be concerned about having a house before considering starting a family.

However, Prime Minister Abdulhamid Dbeibeh wants to change that and establish a precedent for future governments to follow. Last August, he announced his government’s intention to fund weddings through the Marriage Fund. In September, his government allocated 1 billion Libyan dinars ($218 million) to the fund with another billion to follow.

Young couples wishing to get married and start a family rushed to submit the online application to register and get the 40,000 dinars ($8,700) promised by Dbeibeh. Only applicants with official marriage contracts could apply.

Critics of the policy believe it was not carefully considered and is set to backfire, with long-term ramifications yet to appear.

Hadi Zoubida, family law professor at Tripoli University, told Al-Monitor that the government’s policy is “wrong in timing and method,” pointing out that there are more important ways for the government to help Libyans. Marriage is not a priority for the majority of young Libyans “who do not even have roofs over their heads.” He said that it would make more sense if “young people get interest-free mortgages” to build their homes before getting married. Most young Libyans usually live with their family until they get married.

The country suffers from a chronic housing shortage, especially after the ambitious housing projects, launched in 2008, were suspended because of the 2011 civil war. Zoubida noted that the current policy is “discriminatory,” too, because it benefits only young people while ignoring needy larger families.

Despite the lack of official data on underage marriages, many female activists think the policy has forced young girls from poor families into government-funded marriages, just for the money.

Leila Hassan, a female activist in Benghazi, told Al-Monitor that many underage girls have been forced to get married by their poor families, just to get “government handouts.”

Zoubida agrees that underage marriages exist but are hard to verify since “people do not openly discuss them.”

Female parliamentarian Asma Alkhoja openly criticized the scheme when it was debated on Sept. 13, 2021. She described the project as “immoral” and predicted that “courts will be flooded” by amicable divorce cases as some couples only got married for the money.

She said better to “use the money to build houses” for the youth instead of funding marriages while the majority of young people do not have homes to start their families. Faced with public backlash, Alkhoja was forced the following day to explain her comments. She said that she supports the Marriage Fund but opposes the mechanism of “distributing the cash.” Libya’s parliament passed Law No. 5 of 2019 establishing the “Marriage Support Fund,” but the law calls for helping young people build their homes before financing weddings with handouts.

The Libyan Women Peace Platform (LWPP), a civil society calling for wider women participation in peacemaking in the conflict-ridden country, has accused the government of “encouraging underage marriages,” but so far failed to produce any reliable figures. Libya’s marriage law sets the legal marriage age at 18, but it is not always observed.

During a Dec. 29 event in Tripoli, Dbeibeh caused more trouble for himself by misspeaking about unmarried Libyan women. He said “bonuses” would be added to the marriage handouts to “revitalize the market,” so that “older” women get married. He continued to say that “25-year-old women” should not only be married, but should already have “seven children.”

The average marital age in Libya has risen over the last decade, from 25 to over 30. According to Said, this is because “the cost of living has sharply risen.” The former Gadhafi regime used to subsidize many basic necessities helping people make better use of their money. However, corruption and misappropriation have dried up all subsidies.

Women from all walks of life angered by the prime minister’s comments took to social media condemning him as a misogynist and anti-women.

Aya Burweila, analyst and founder of Code on the Road, a women-focused civil society group, accused Dbeibeh of using public funds to rally support for his presidential campaign in the now-suspended presidential polls.

She told Al-Monitor that the caretaker prime minister is bribing “segments [the youth] of the Libyan society,” describing the Marriage Fund as a “thinly-veiled, money for sex” scheme. She thinks Libyans don’t need a marriage fund but a “sovereign, elected and accountable government.”

To Hibbah, a Benghazi-based educator who does not want her family name published, funding marriages is an indicator of government “priorities in the wrong order.” She told Al-Monitor, “He [Dbeibeh] is trying to buy votes,” describing his decision as “ridiculous” and predicting divorces to “skyrocket.”

Dbeibeh and his government have been marred in corruption scandals and two of his ministers have been detained for questioning. Last November, he was accused of bribing his way to become prime minister. His representatives in the United Nations-led talks in Tunis, Tunisia, were said to have offered thousands of dollars in return for votes in the political dialogue forum that went on to elect him as prime minister in a Geneva meeting on Feb. 5, 2021.

Stephanie Williams, then-UN envoy to Libya presiding over the meetings in Tunisia, acknowledged the bribery issue. In an interview last May, she said that the issue was referred to the UN’s Libya sanctions committee for investigation because it is “beyond the mandate” of her mission in Libya. However, no further action has been taken so far.

In another embarrassing episode, Dbeibeh claimed to have a master's degree in engineering from Regina University in Canada, but one of his classmates told Al-Monitor he never actually finished his English-language courses. The University in question, responding to one Libyan investigative journalist’s inquiry, denied that Dbeibeh ever studied there. The prime minister is yet to comment on the matter that has been all over the internet for the last couple of weeks.

If Dbeibeh runs for president, whenever the vote takes place, many women will not be voting for him.