A spokesperson for the Kurdish-led Syrian Democratic Forces said Islamic State militants set off a car bomb and clashed with security forces. 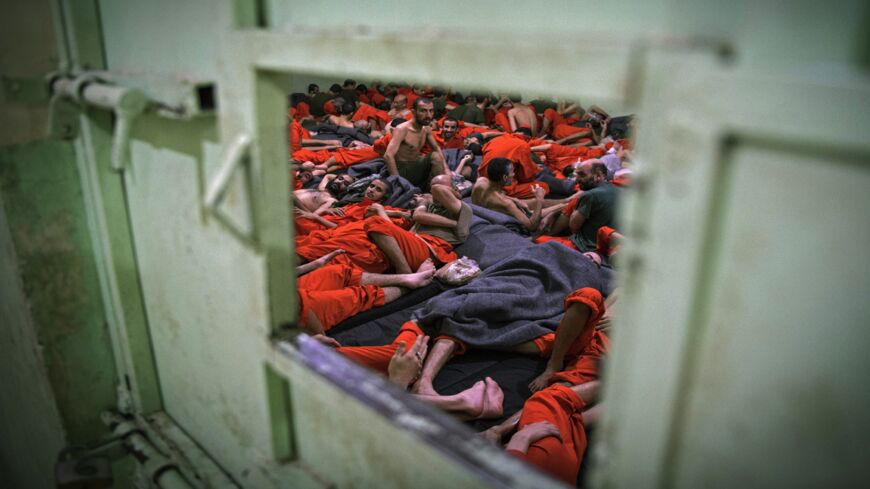 Men suspected of being affiliated with the Islamic State gather in a prison cell in the northeastern Syrian city of Hasakah on Oct. 26, 2019. - FADEL SENNA/AFP via Getty Images

Kurdish-led forces in northeast Syria on Thursday said they thwarted a prison break at a detention center holding Islamic State (IS) militants.

A spokesperson for the US-backed Syrian Democratic Forces (SDF) said a car bomb was set off near Geweran prison in Hasakah province.

The “insurgence coincided w/a car bomb explosion near the prison conducted by Daesh sleeper cells, who infiltrated from the surrounding neighborhoods” and clashed with internal security forces, tweeted SDF spokesperson Farhad Shami, using the Arabic acronym for IS.

"In an attempt to create chaos, the Daesh detainees burned blankets and plastic materials inside dormitories," Shami said. "The members of terrorist cells who attacked the prison from outside fled to the al-Zohour neighborhood near the prison and hid in civilian homes, and our forces imposed a security cordon around the area."

According to two residents cited by Reuters, several inmates were killed in the episode. The Syrian Observatory for Human Rights, a UK-based war monitor, said “a number of prisoners managed to escape.”

Nearly three years after IS lost its final stronghold in the Syrian town of Baghouz, the group has been exploiting the country’s economic crisis to lure new recruits. Prison officials and current detainees in Hasakah told Al-Monitor that IS is offering irresistible sums of money to poor Syrians willing to join their ranks.

The SDF and its political arm, the Syrian Democratic Council (SDC), have long asked the United States and coalition partners for additional support in securing the detention facilities housing thousands of IS prisoners, many of whom Western governments have refused to repatriate and prosecute.

Sinam Mohamad, the SDC's top diplomat in Washington, tweeted Thursday that the prisons and the potential for detainees to escape remains a threat to northeast Syria.

“A solution should be found to keep the region stable and secure,” she said.