The spokesman for the Islamic Revolutionary Guard Corps said newly unveiled Iranian ballistic missiles pushed Israel back from threatening the Islamic Republic with a military strike. 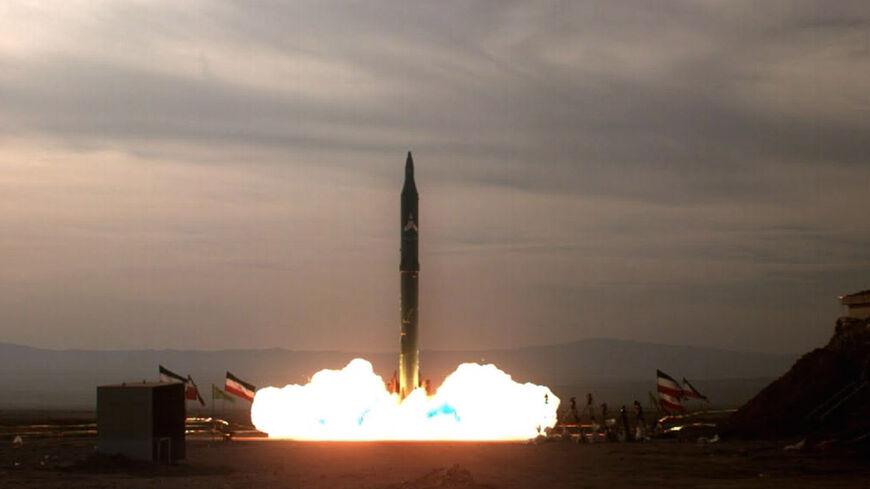 Picture obtained from the Iranian ISNA news agency on Dec. 16, 2009, shows the test-firing at an undisclosed location in Iran of an improved version of the Sejil 2 medium-range missile which the Islamic republic says can reach targets inside Israel. - VAHI REZA ALAEE/AFP via Getty Images

The spokesman for Iran's Islamic Revolutionary Guard Corps (IRGC) said last week's military drills in his country sent a message to Israel and made it end its war threats against the Islamic Republic.

"The Zionists [Israeli government] were under the impression that they were capable of neutralizing some of our ballistic missiles," Ramezan Sharif told the state-run Arabic language Al-Alam TV. "But thanks to our spectacular advances … [Israel's anti-missile] Iron Dome system fails to detect our projectiles."

The spokesman was referring to ballistic missiles Iran showed off last week in a major military exercise, dubbed Great Prophet 17.

In the run-up to the war games, Israeli officials ratcheted up threats and were reportedly preparing an Iran strike simulation. But Sharif said that from the Iranian perspective, those moves "are little more than rhetoric" meant by Israeli officials "to deflect attention" from their domestic problems. He also echoed some Israeli military assessments that the Jewish state lacks the prowess to defeat Iran.

Israel is believed to have successfully launched a chain of sabotage attacks against Iran's nuclear program over the past several years in an effort to halt or slow down the country's ramped-up enrichment and cut through its progress toward nuclear weapons. Iran says its nuclear program is entirely peaceful.

Israel, Western powers as well as some Arab states have also expressed growing concern over Iran's ballistic missile program, deeming it a threat to regional and global security. Iran insists the program is deterrent and non-negotiable. "Who would put such a [ballistic missile] capability up for negotiations, when the other side is made up of a group of deceitful traitors?" the IRGC spokesman rhetorically asked in his interview.

The new missiles, according to Sharif, also sent a message on "a second layer" to some Persian Gulf states, who "are gravely mistaken by hinging their own security on that of the Zionist regime [Israel]."

The comments by the IRGC spokesman came two days after Iran marked the second anniversary of the killing of its top commander, Qassem Soleimani, who was targeted in a US airstrike outside Baghdad's international airport. Sharif noted that Soleimani's ambition was "to empower the resistance front," a term Iran uses to describe its network of proxies across the Middle East. The mission's ultimate goal "is the liberation of Palestine," Sharif said, adding that the pro-Iran forces are on track to reach that goal even after Soleimani's death.

As the IRGC spokesman's interview was broadcast from Al-Alam, a video went viral on social media platforms, showing a statue of Soleimani burning in the Western city of Shahr-e-Kord, less than a day after it was erected at a grandiose ceremony. Iranian state media blamed the move on "unidentified men," lamenting it as "impudent and flagrant."