The expected collapse of the nuclear deal and the escalated confrontation between Iran and Israel in Syria is minimizing space for negotiations over Iran's missile program. 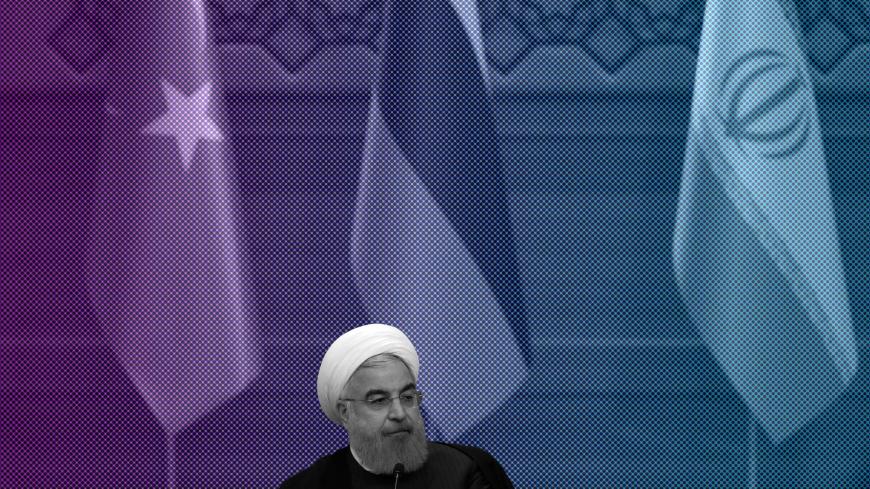 Iranian President Hassan Rouhani attends a joint news conference with his counterparts Recep Tayyip Erdogan of Turkey and Vladimir Putin of Russia (not pictured) after their meeting in Ankara, Turkey, April 4, 2018. - REUTERS/Umit Bektas

Following the joint US-British-French attack on Syria last month, opposition is hardening in Tehran against any form of negotiation with the West over Iran's ballistic missile program. Accompanying this trend is the rare unity among political elites in a climate of division. The shared belief underlying this attitude is that the West is seeking to hold talks with Iran over its missile program in order to undermine the country's defense capabilities and make it vulnerable to future attack.

In the early hours of April 14, US President Donald Trump joined forces with Britain and France to launch over 100 missiles at three Syrian targets, which they claimed to be chemical weapons sites. The move marked Trump's second military action against the Syrian government since taking office. Although the attacks were not as severe as anticipated by many observers, they were sufficient to reinforce Iran's resolve to not negotiate with the West over its missile capabilities.

Prior to the missile strikes, there were differing opinions in Tehran about the potential measures Trump might take in Syria. Within a few hours after the attack, however, a unified voice came out of Tehran: Various political groups all condemned what they described as a lack of respect for the boundaries of an internationally recognized government. This wave of condemnation was Iran's natural response to an attack on a friendly country.

After the condemnation came a deeper analysis of the Western military action in Syria. Mehdi Mohammadi, a leading conservative theoretician who has opposed the Joint Comprehensive Plan of Action from the get go, tweeted on April 14, "It is interesting how with their [current] missile game in Syria, in two weeks, they plan to propose negotiating with Iran over its missile program."

Meanwhile, Kayhan, the most prominent conservative outlet in Iran, wrote on April 15, "These threats and attacks have reinforced our belief for the need to work harder to strengthen our missile capabilities. The West's adventurism, in whatever form or guise, prompts us to expand our missile capabilities and our technology to develop other weapons and equipment for defense."

Opposition to talks on Iran's defense capabilities is also echoed by the moderate administration of President Hassan Rouhani. For instance, on March 5, Foreign Minister Mohammad Javad Zarif tweeted that Iran's ballistic missile program is non-negotiable. In February, Rouhani himself also rhetorically asked how one cannot have defense capabilities in a situation where the United States flagrantly threatens other countries, adding that Iran would not negotiate with anyone over its missile program.

Beyond generally weakening Iran's military capabilities, hard-liners in particular are concerned that negotiating over the country's missile program will allow for a gradual spillover of Israel's sporadic attacks on Syria, which generally avoid international condemnation. With a looming May 12 deadline for Trump to decide whether to waive sanctions under the nuclear deal, the prospect of an Israeli escalation in Syria is emerging as a point of concern since Tel Aviv has stepped up its attacks in an apparent effort to provoke a response from Iran.

In addition to these concerns, there is also the matter of the West's credibility — especially the United States — as a negotiating partner. Prior to Trump's presidency, this kind of sentiment was confined to Supreme Leader Ayatollah Ali Khamenei and elements of the hard-line camp in Iran. However, with Trump rejecting the commitments made by the previous US administration, this sense has spread throughout the Iranian political elite, which is now largely of the view that it is irrelevant whether an agreement is reached with the United States since the next occupants of the White House can simply ignore any US commitments, including those enshrined in UN Security Council resolutions.

In this vein, prominent Iranian political analyst Saeed Laylaz told Al-Monitor, "At present, there is an almost unanimous distrust toward Trump and US intentions. Perhaps international relations is not a place for trust. However, when an administration is disregarding its own commitments to this extent, how can any sane mind expect us to recognize them and negotiate with them again?" Laylaz added that Israel's increased activities in the region "are a warning sign to avoid any future negotiations."

Indeed, many Iranian foreign policy experts are of the belief that the West's desire to negotiate over the country's missile program is aimed at disarming Iran and weakening its defense capabilities to allow for future attacks. Nosratollah Tajik, Iran's former ambassador to Jordan, told Al-Monitor, "What happened in Syria on April 14 showed that some aspects of Iran's missile program are not just preventative [by establishing deterrence] but also a vital factor for Iran's survival. Therefore, it is now clearer than ever that negotiations on missiles will only alter the regional balance to Iran's disadvantage and in Israel's favor."

A look at the Saudi-led war on Yemen gives credence to Tajik's points. The impression in Tehran is that, instead of concentrating on Riyadh's attacks on civilians, world leaders have focused their attention on the number of Yemeni missiles, which they claim to have originated from Iran. Thus, there is a growing belief in Iran that the key motivating factor behind the West's desire to enter into negotiations over the size and scope of the country's missile program is to weaken Iran and to increase its vulnerability. Some saw this same dynamic in the negotiations leading to the nuclear deal.

The assortment of broken promises by the United States, Israel's attacks on Syria and the joint US-French-British missile strikes have all contributed to the emergence of deeply negative views among Iranian political elites of the prospects of any form of negotiations with the West over the country's missile program. Although this viewpoint is more strongly felt among hard-liners, moderates and even Reformists appear convinced that any such negotiation will only be a pretext for weakening Iran's capabilities and setting the stage for a more vulnerable Tehran in the future. If anything, this sentiment will likely increase manifold should Trump withdraw from the nuclear deal on May 12.

Correction: May 4, 2018. An earlier version of this article mistakenly identified Mehdi Mohammadi as the editor-in-chief of the hard-line daily Vatan-e Emrouz.