Egypt has breathed new life into an old agricultural project in its Western Desert, hoping it will increase food production and reduce imports. 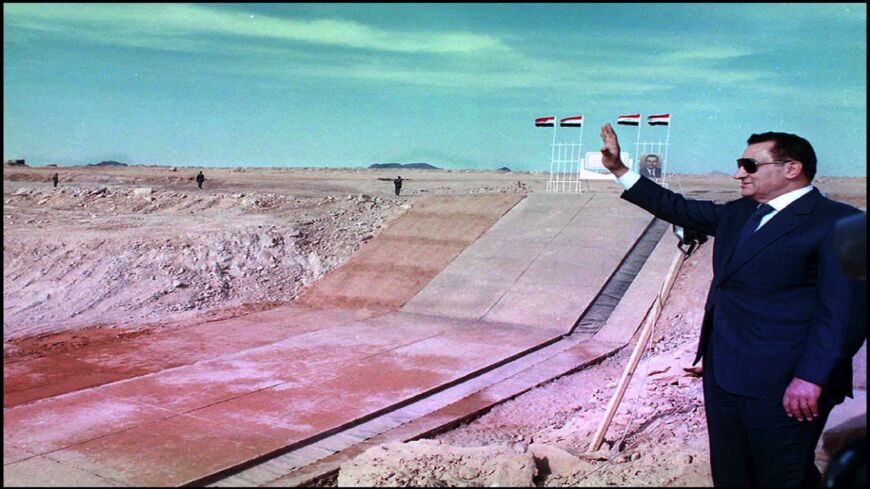 Egyptian President Hosni Mubarak in front of a new canal that he hoped at that time would irrigate the Western Desert and increase the country's habitable area from 5.5% to 30% by the year 2025. - STR/AFP via Getty Images

CAIRO — Egypt is reawakening a decades-old agricultural project in its Western Desert as it endeavors to feed its growing population and bridge a wide gap between food production and consumption in it.

The Toshka project, Egypt's first serious attempt to invade its vast desert, was launched by late President Hosni Mubarak in 1997.

The project was Mubarak's ambitious plan to create the New Delta in the middle of the desert and bring about economic development that would effect positive social change in his country.

He distributed the land of the project, around 540,000 acres, to local and Arab investors, hoping the private sector would drive reclamation efforts in it and spare his government the burden of providing the investments needed by it.

A few years later, however, the project came to a screeching halt.

Mubarak-era ministers attribute the failure of the project to the lack of necessary investments and political will.

The project had slipped into oblivion since then, being overtopped by Egypt's political developments, including Mubarak's 2011 downfall and the turmoil that swept through it after this.

Nonetheless, in October 2020, incumbent President Abdel Fattah al-Sisi ordered the revival of the project and specified 6.4 billion Egyptian pounds (around $413 million) for the needed infrastructure, breathing new life into national hopes for turning the desert green.

"Reclaiming more land, including in the desert, has always been an important strategy to increase food production," Essam Seyam, an agricultural economics professor at Cairo University, told Al-Monitor.

The project is only a small detail in the larger picture of Egypt's struggle to secure food for its growing population and reduce food imports.

Egypt was once the breadbasket of the Roman Empire. Now, however, it is the world's largest wheat importer.

The Arab country's list of food imports is endless, and invading the desert has become one of its most important options to feed the growing population, specialists like Seyam say.

Located around 225 kilometers southwest of the Upper Egyptian city of Aswan, Toshka will act as a link between several Western Desert oases.

The project will focus on the production of important crops such as wheat, maize, cotton and oil.

It will also include the Middle East's largest date palm farm that will cover 37,000 acres.

The farm will contain 2.3 million date palms, 1.35 million of which have already been planted over 21,000 acres.

Sisi's agricultural expansion plan aims to compensate for the land Egypt lost in the past decades in the Nile Valley and Delta to its urban crush and produce more food for the country's growing population.

It is to be implemented across Egypt, including in the Sinai Peninsula and in other parts of the Western Desert.

One of the projects within the expansion plan is located in the northwestern part of Egypt.

Extending over half a million acres of land, the project, called Future of Egypt, has already begun yielding produce.

A modern road network was established close to the project to ease the transport of its produce to different cities.

Another project includes the establishment of 100,000 greenhouses in different parts of Egypt for the production of vegetables and fruit.

"Agricultural expansion projects within this plan are very important for increasing the national food production, given Egypt's growing population," Naeem Moselhi, an adviser to the minister of agriculture and land reclamation, told Al-Monitor. "These projects are also important for reducing food imports."

Egypt lost some of its most fertile land in the Nile Valley and Delta due to its urban expansion over the decades.

Sisi expressed shock at the pace of farmland destruction in August 2020 when he ordered the Egyptian army to remove buildings constructed illegally on farmland.

In late December 2021, he advised his countrymen to stop constructing residential buildings and save their money in the nation's banks instead.

Nonetheless, Egypt's desire to make up for the farmland it lost along the Nile by invading the desert will be far from easy, specialists say.

Turning the sands of the desert green requires a fortune, which might slow down progress in some of the agricultural expansion projects declared by Sisi's administration so far, they add.

"The private sector will be instrumental in advancing reclamation projects, but after the government provides these projects with the necessary infrastructure," Seyam said.

Sisi invited the private sector to partner with his government in implementing development projects more than once in the past period, including most recently in late December when he inaugurated a series of new projects in southern Egypt.

In the past few years, Sisi's administration spent tens of billions of pounds on water treatment and seawater desalination plants to partly bridge the water deficit and make up for scarce water.

"Our limited water resources will always be a major challenge on the road to expanding farmland," Hussein al-Atfi, the former minister of irrigation, told Al-Monitor. "We can only expand this farmland by finding untraditional sources of water, including through treating wastewater."

Some of the farmland cultivated within the Toshka project will depend on overflow in the reservoir of the High Dam in southern Egypt.

This water will be channeled to the project by the Sheikh Zayed Canal, which has a capacity for 5.5 billion cubic meters of water annually, the Egyptian government says.

This water, it adds, will be enough to irrigate the project and contribute to food production in Egypt.

"We hope this project and others can increase the production of important crops and help us stop importing them from other countries," Moselhi said.