Egypt acts to rescue its farmland from urban sprawl

The government is confronting the loss of farmland by demolishing homes and buildings constructed without permits. 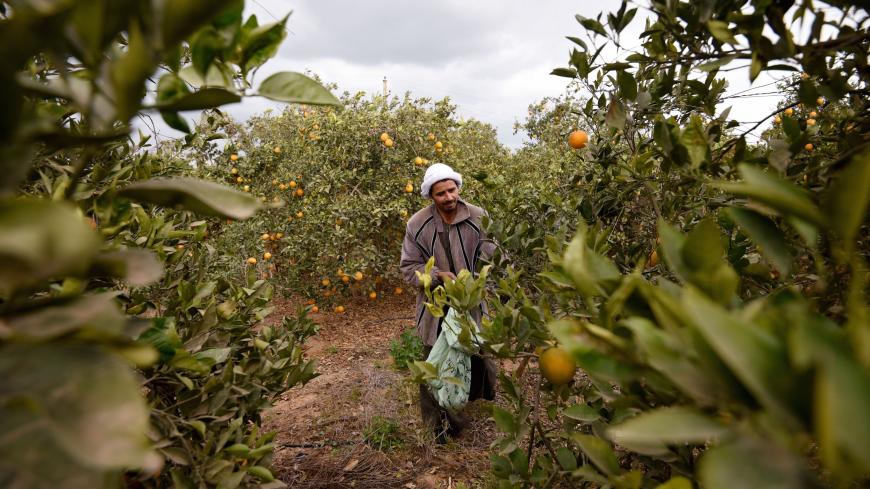 CAIRO — Egyptian authorities are moving ahead with a big crackdown on homes and other buildings constructed illegally on farmland nationwide.

Municipal authorities have demolished thousands of structures built on agricultural land without permits and in violation of Egypt's agriculture laws.

These structures were constructed over the years because of corruption in some administrative offices, including in municipalities that should have been acting against construction violations. There are growing calls to bring to court municipal officials who failed in preventing such construction over the years.

Underlying the ongoing campaign is Egypt's fear about the loss of almost 9 million acres of farmland to urban expansion.

Egypt has been fighting tooth and nail to protect this farmland — employing vast resources to do so — and prevent it from turning into jungles of concrete. Some farmland areas have been turned into unorganized housing blocs.

Cabinet spokesman Nader Saad said Aug. 31 that the country has lost almost 12% of its farmland to construction, describing the loss of farmland to urban expansion as a “national catastrophe.”

This further sounded the alarm over Egypt's future ability to produce enough to feed its population. “This is the land that produces our food,” Saad told the private TV network Al-Hayat.

The UN Food and Agriculture Organization says Egypt only produces 60% of its food and spends $2.5 billion annually to import the remaining 40%.

The gap between food production and consumption is expected to widen if Egypt's burgeoning population of 102 million continues to increase as it has and food production does not keep pace.

“Egypt has lost enough farmland to the construction of homes,” said Sayed Khalifa, the head of the Farmers Union, the independent guild of the nation's farmers. “We will keep importing food so long as we allow our farmland to be lost and fail to produce enough food.”

Farmland loss to urban growth is only one of many challenges facing food production in Egypt. These challenges include climate change-induced rising temperatures and rising sea levels.

A continual rise in the sea level brings the risk of submersion and greater salinity of the Nile Delta, which produces a sizable portion of Egypt's food.

Egypt is trying to adapt to climate change and is involved in what seems to be unending negotiation over the Ethiopian Grand Renaissance Dam in Cairo's bid to reduce harm from the project.

But Egypt's main effort to stop the loss of its farmland is to stop its people's unrelenting construction of homes on this farmland.

Egyptian authorities are acting firmly in this regard. They are demolishing thousands of homes constructed without permits on farmland in various provinces.

The authorities are also threatening to punish, including by jailing and fining, those involved in construction violations on agricultural land.

Egypt has a raft of laws that strive to protect farmland from loss to the construction of homes.

Law No. 7 of 2018 punishes those who construct buildings illegally on farmland by jailing up to five years and a fine up to 5 million Egyptian pounds (roughly $312,500).

It further gives the authorities the right to remove violations, even after the jailing and fining of the people committing them.

The same law punishes those who destroy farmland and commit acts that reduce its fertility, including by constructing on it.

Nevertheless, such a law and others have done little to prevent the construction of homes on farmland, which has already assumed enormous proportions.

On July 9, a spokesman for the Ministry of Local Development, Khaled Qassem, said authorities had demolished homes constructed on more than 1 million square meters of farmland (247 acres).

Magdi Malak, a member of the parliament’s Committee on Agriculture, said Aug. 31 that 1.9 million construction violations were committed on farmland between 2011 and 2019.

These figures were received with anger inside government quarters.

On Aug. 29, Egyptian President Abdel Fattah al-Sisi threatened to use the army to erase whole villages constructed on farmland.

He faulted the nation's media for failing to explain the dangers inherent in the construction of homes on agricultural land.

“Building homes on farmland threatens our country's food security,” Mohamed al-Qersh, an assistant to the minister of agriculture, told Al-Monitor. “The government works hard to protect this security.”

Egypt's population has been growing at 1.94% annually, adding 2 million people to the population every year. The population would rise to more than 160 million in 2050 if growth remains constant.

This growth threatens the agriculture sector, which the Food and Agriculture Organization says provides livelihoods for 55% of the population and directly employs about 30% of the labor force. The sector accounts for about 20% of total exports and foreign exchange earnings. The same sector contributes almost 11.3% of Egypt's gross domestic product.

Most of Egypt is arid desert, which is why most agricultural and housing activities are concentrated along the Nile Valley and Nile Delta.

Egypt's successive administrations tried to reduce the pressure of construction on farmland in the Nile Valley and Nile Delta by invading the desert.

They did this by constructing new urban communities in the desert and also reclaiming thousands of acres of desert land and converting them for agricultural use.

However, most reclamation projects were not very successful, specialists said.

“Most of the reclamation projects were done without proper feasibility studies,” Gamal Seyam, a professor of agricultural economics at Cairo University, told Al-Monitor.

To increase food production and compensate for farmland loss, Sisi's administration is reclaiming around 1.5 million acres of land in the desert.

The same administration has been constructing thousands of apartments to meet demand for housing and put the lid on the unorganized construction of homes, especially on farmland.

However, there are fears of a political or security backlash from the ongoing demolition of homes constructed on farmland, especially with anger running high already because of commodity price hikes.

Some people are warning against the ongoing demolition campaign, advising the president to find a solution other than the demolition of homes. Other people came out to complain that the house demolitions have destroyed their life's savings.

But Malak said demolition is the only action the authorities can take to protect the farmland and rescue food production.

“If we do not act now against the loss of farmland to this suburban expansion, we will end up losing all our farmland,” the legislator said. “The president and the government are constitutionally responsible for the protection of the farmland and also ensuring the production of enough food for the people.”