Iraqis fear that Islamic parties and armed religious groups are trying to impose their fundamentalist views on social and personal freedoms. 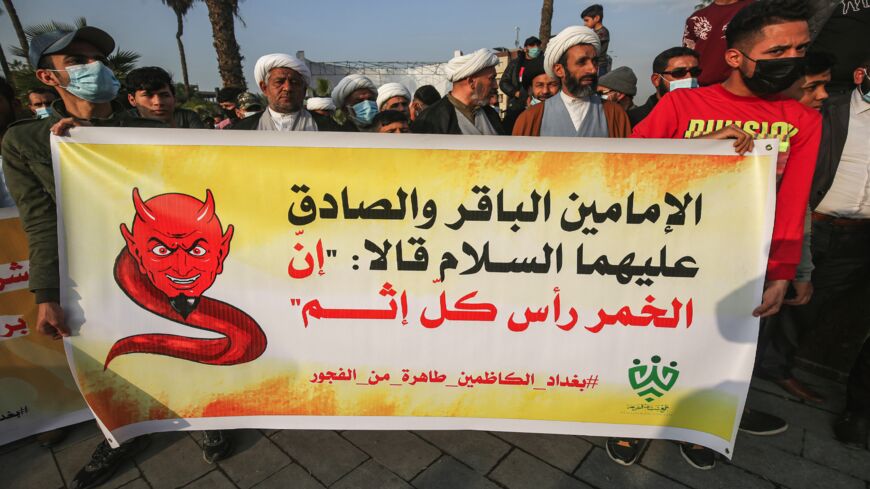 Shiite Muslim clerics march with a banner quoting Shiite imams Baqir and Sadiq as saying that alcohol is the root of all sin, during a demonstration in Baghdad on Dec. 3, 2020, demanding the closure of nightclubs and alcoholic beverage sales. - AHMAD AL-RUBAYE/AFP via Getty Images

Concern is on the rise recently among Iraqis and defenders of freedom due to the heated rhetoric against concerts in Baghdad. Those concerned are expressing fear that such rhetoric may be the beginning of the imposition of a “religious guardianship on society.”

On Dec. 29, 2021, the religious Baqir al-Olum University in Baghdad issued a press statement denouncing concerts in the capital and stressing the importance of reintroducing the laws of “promotion of virtue and prevention of vice.”

The statement by this Islamic university comes days after concerts were held in Baghdad that were lambasted by clerics and Islamic parties.

Iraqis derided these clerics and Islamic parties, accusing them of owning and protecting nightclubs that abound in drugs and human trafficking yet trying to ban family concerts and turning a blind eye to gambling and drug clubs.

Saadoun Mohsen Damad, an Al-Iraqia TV presenter who specializes in Abrahamic religions and extremism, tweeted derisively: “While Saudi Arabia is gradually moving away from Salafi extremism, Iraq is [steadily] inching toward it. Congratulations to the political Islam parties for their achievements in Iraq.”

On Dec. 24, 2021, during his Friday sermon, Shiite cleric Jawad al-Khalisi criticized the Baghdad concerts and called for unifying efforts to close the arenas.

“The Sharia requires use to reject, denounce and close all places where obscenity, vice and corruption are practiced,” he said.

The campaign against concerts began when Egyptian singer Mohammad Ramadan held a concert in Baghdad on Dec. 10, 2021, during which he unbuttoned his shirt in front of Iraqi families — a gesture that was considered to be “contrary to Iraqi norms and traditions” by several political actors and clerics.

Jaafar al-Ibrahimi, a prominent Shiite cleric described as a “moderate preacher,” criticized Ramadan, saying he was like “indecent monkeys and lions in heat,” a description that many Iraqis considered not in line with their style and personal freedoms.

Former Iraqi Prime Minister Nouri al-Maliki made similar remarks, describing the singer as “obscene, immoral and fallen,” stressing that he was against the type of art that was presented but not art in general.

Iraqis, in particular Baghdad residents, fear that extremism might control their lives, so they rushed to launch a counterattack on clerics, political leaders and armed groups by defending concerts as being part of their personal freedoms guaranteed by the Iraqi Constitution.

The hashtag #Baghdad is civil made the rounds on Twitter in an attempt by Iraqi activists and influencers to stress the capital’s diverse civil identity and challenge groups that wish to “control public life in the capital.”

On Dec. 16, 2021, dozens of people demonstrated in front of Sindbad Land theme park east of Baghdad, calling for its closure even though it is an entertainment park and serves as a concert arena only on rare occasions.

A security member responsible for securing the vicinity of the area told Al-Monitor on condition of anonymity, “The demonstrators belong to the extremist Islamic Virtue Party, and they tried to burn parts of the city on the pretext that concerts are held in it.”

An investor in concerts in Baghdad who declined to be named for fear of reprisal told Al-Monitor, “The attack we witnessed was unjustified. The concerts did not offend anyone, but it seems that there are attempts to impose religious extremism on Iraqis.”

A video clip shows a cleric leading the demonstration and saying that music concerts are an “attack on the honor of Iraqis” and that “Imam Hussein, the grandson of the prophet, was keen on promoting virtue and preventing vice.”

As a result of these events, the administration of the Sindbad Land theme park decided to cancel concerts and contracts with the companies that organize them. Other concerts were also canceled in the capital and in Dhi Qar governorate for other artists fearing similar attacks.

Mudar al-Hilu, a Shiite cleric and preacher, told Al-Monitor, “Two things are very harmful to religion. The first is to force people to believe in it, and [the second is] to use it politically.”

The heated rhetoric against concerts was not limited to Shiite clerics only. Abdul Aziz Fawaz al-Hiti, a Sunni cleric and the imam of al-Harith bin Yazid al-Amiri Mosque in the city of Hit in Anbar governorate, also criticized Ramadan in his Friday sermon — but with a less harsh tone than his Shiite counterparts.

Hamid Jheish, a prominent activist and defender of freedom in Iraq, told Al-Monitor, “Islamic parties, represented by armed parties and groups, have tried more than once to impose their religious and ideological convictions on society in a bid to establish councils and bodies to interfere with social freedoms.”

“The rise of the secular tide and the increase in activities supporting freedoms, cultural and artistic events that indirectly undercut the Islamic groups’ work, prompted the latter to go out in the streets and in front of some facilities to prevent the holding of concerts. This seems to be a prelude to establishing committees for the promotion of virtue and the prevention of vice.”

In a nutshell, one can say that in the coming Iraq, the country might witness the emergence of religious bodies or institutions seeking to impose their religious guardianship on society, especially with the armed parties and groups’ retreat on the political landscape, which means they would want to prove themselves in any other means and might opt for establishing the committees of promoting virtue and preventing vice.