Religious leaders in Iraq are calling on voters to exercise caution in the upcoming elections and avoid casting votes for corrupt politicians. 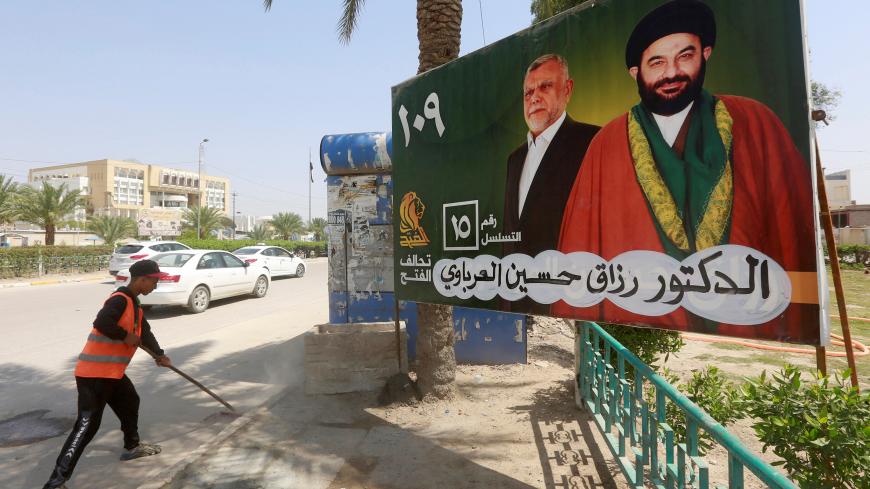 A worker cleans the street next to a campaign poster of candidates ahead of the parliamentary election, Najaf, Iraq, April 14, 2018. - REUTERS/Alaa Al-Marjani

As the May 12 parliamentary elections draw closer, religious figures and institutions in Iraq are exchanging views over participation in the elections; some call for boycotting the elections, some recommend voting for new candidates and others promote certain political parties in one way or another.

During the April 13 Friday sermon, the representative of Grand Ayatollah Ali al-Sistani, Ahmed al-Safi, reiterated how the Shiite religious establishment in Najaf insists that politicians who have previously failed to live up to executive or legislative responsibility not be elected.

Safi warned against voting for those who have not provided any services to the people, saying, "Don't vote for those you voted for before and who failed.” He stressed the importance of choosing individuals who have the ability to “swiftly respond” and solve problems.

Sistani's representatives took to explaining his opinion, calling on voters to be careful and spare Iraq the dangers of choosing an ineffective parliament and government.

Rashid al-Husseini, a high-ranking cleric close to Sistani, told Al-Furat TV on April 14, “The corrupt people we have voted for have robbed the nation. We ought to not vote for them again, even if they are members of our clan or sect.”

Husseini said, “I would rather trust a faithful Christian than a corrupt Shiite. A person who does not pray and fast but can be trusted with the money of the people and the nation is deserving of my vote. Even if a person prays and fasts, I can never vote for them if they steal.”

A number of other clerics close to Sistani also have made it clear that no one should vote for someone who took an executive or legislative position in the post-2003 Iraqi governments, warning about new candidates used by the parties in power to deceive voters into voting for the parties again. The clerics also called for there to be, first and foremost, competent and honest candidates.

Supporters of Shiite cleric Muqtada al-Sadr addressed Sistani on April 16, saying, “Sistani spoke about 'not voting for people we trusted before and who failed,' while you said, 'cut them from the roots,' in reference to removing the current political class altogether. Our question is: Does this refer to those who won previous elections or those who served in an executive position such as a minister or a governor and his deputies?”

Sadr stressed the need to choose new and trustworthy political figures, saying that Sistani’s words "need to be applied and should rise above the voice of corruption.”

Although Shiite religious leaders in Najaf insisted that they do not support any candidate or political entity, Shiite cities, including Najaf, are still filled with pictures of candidates alongside a religious leader or authority to encourage religious people to vote for them. Iraqi parties are clearly exploiting the religious institution and its representatives to serve their political interests.

Meanwhile, the Iraqi street is fairly frustrated by the elections, since many see voting as ineffective. Sadr tried to parry this frustration by saying that boycotting the elections would eventually allow the corrupt to rise to power and calling on Iraqis to prevent corruption "and save the nation with your nationalist votes.”

On the other hand, a number of religious leaders called on the Iraqi people to boycott the elections.

Jawad al-Khalisi, an influential Shiite cleric in the city of Kadhimiya, near Baghdad, spoke about the legislative elections during his Friday sermon March 30, describing them as “fraudulent and deceptive.” He said that they are “fabricated by the occupation.”

He called on the Iraqi people to refuse to participate in these elections. He said, “The occupation’s political project, false elections and corrupt class are what put Iraq in this situation,” reiterating the need to boycott all participation — “be it by running or voting.”

Khalisi had previously said that “participating in the elections would be a clear-cut sin by those who want to make themselves a laughingstock and a tool in the hands of the immoral enemies of Islam.”

There are also civil calls for boycotting the elections; some have sought UN intervention in overseeing the elections, passing new electoral laws, appointing an independent commission and guaranteeing full supervision of the vote.

What makes the 2018 elections different from the first elections in 2005 is that Sunni religious leaders are not hesitating to urge the Sunni street to participate, although many of them had urged a Sunni voter boycott in the past.

The Fiqh Council of Iraq, considered the largest authority for Sunnis in Iraq, has called on Iraqis to “actively participate in the elections, even if the intention is to reduce corruption as much as possible, not to succumb to feelings of frustration and not to follow the calls of the devil or the deceitful.”

It seems that the diverse religious views on the elections and the attempt of the religious institutions to distance themselves is a natural development of the democratic process in Iraqi society that has been taking form, in fits and starts, since 2003. The Iraqi people have come a long way since they were a traditional society following religious and tribal loyalties; they now form a politically diverse society in which the religious institutions seek to avoid interference in the political rivalry among parties.