Violence in West Bank may lead to new confrontation with Gaza

Hamas and the Palestinian Islamic Jihad have claimed responsibility for two shooting attacks in less than a month in the West Bank and Jerusalem. 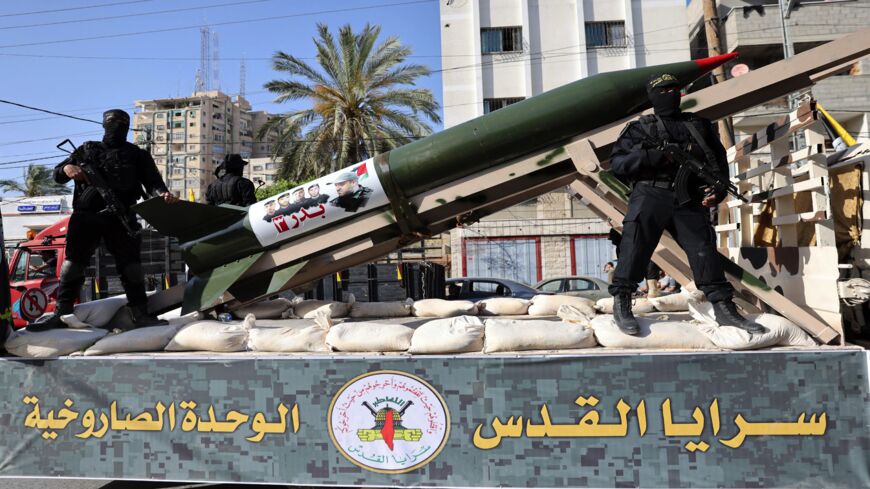 Fighters with the Saraya al-Quds Brigades, the armed wing of the Palestinian Islamic Jihad movement, parade with Bader 3 rockets in the streets of Gaza City during a rally on May 29, 2021. - THOMAS COEX/AFP via Getty Images

RAMALLAH, West Bank — The Israeli army announced Dec. 19 the arrest of four Palestinians from Silat al-Harithiya in the Jenin governorate after they carried out a shooting attack near the city of Nablus on Dec. 16, killing a settler and wounding others.

The Jenin Brigade of Al-Quds Brigades said in a statement via Telegram, “We claim full responsibility for the Homesh operation, which was carried out by the Al-Quds Brigades in response to the occupation’s causing of trouble in Nablus and in revenge for the blood of the martyr Jamil al-Kayyal” who was killed by Israel on Dec. 12.

For Israel, the Homesh operation portends that similar serious operations could unfold in the West Bank.

The Homesh operation was carried out by an armed group that used an M16 automatic rifle and a locally made Carlo rifle, knowing that perpetrators of previous operations would settle for Carlo rifles alone. The Homesh operation was also carefully planned. The perpetrators set an ambush for the settlers’ car and waited for it to reach the specified place, where they sprayed it with bullets and then quietly left the place.

The Homesh operation managed to attract the attention of the Israeli military and politicians.

Israeli Prime Minister Naftali Bennett, accompanied by his chief of staff, Aviv Kochavi, Shin Bet security service chief Ronen Bar and senior Israel Defense Forces commanders, followed in the Shin Bet special operations room the arrest of the perpetrators while Bar personally headed to the arrest site as it happened in a very rare step of its kind.

Since the Abu Shkhedem operation, Israel has been increasingly accusing Hamas of working on activating its military action in the West Bank and igniting the situation on the ground.

Israel announced Nov. 22 the dismantling of a Hamas “cell” led by Hamas Vice President Saleh al-Arouri in the West Bank and said it had plans to carry out terrorist attacks inside Israel. More than 50 people were arrested, and funds and weapons were seized. On Dec. 8, Israel announced the discovery of an armed Hamas cell in the town of Surif, north of Hebron, run by the movement’s leadership in Turkey.

The November Hamas operation in Jerusalem and the recent PIJ operation near Nablus are two indicators of the possibility of the return of organized operations to the West Bank, which may lead to a deterioration of the situation on the Gaza front, as Israel seeks to unify the truce file.

Lebanese newspaper Al-Akhbar reported Dec. 20 that the Egyptian delegation that visited Gaza on Dec. 19 conveyed an Israeli request to the resistance to refrain from escalation in the West Bank, as they warned that the continuation of operations there would lead Israel to return to its policy of assassinations in Gaza and abroad, especially against those involved in the operations in the West Bank.

The visit of the Egyptian delegation came after Hamas and the PIJ warned Dec. 18 that “the patience of the resistance is wearing thin due to the occupation’s procrastination in lifting the siege, its practices in Jerusalem and the West Bank,” and Gaza’s Joint Chamber of Resistance Factions’ intention to conduct a maneuver in Gaza.

Mustafa al-Sawaf, a political analyst close to Hamas, told Al-Monitor that the factions’ return to organized operations is possible in the wake of successful individual operations over the past years, especially considering that the conditions in the West Bank are no longer bearable.

He noted that “Gaza, the West Bank, and Jerusalem make up a single arena and there is no difference between them. What is taking place in the West Bank and Jerusalem will have repercussions on Gaza as it could lead to a clash with Israel. This is an equation that has been entrenched during the Sword of Jerusalem battle.”

Fadi Nahas, a researcher of Israeli national security and army affairs at the Palestinian Center for Israeli Studies, told Al-Monitor, “Israel believes that coordination between the West Bank and Gaza is still weak, so it is not worried about the factions returning to military action in the West Bank, but the occurrence of individual or organized operations remains at the table.”

“Despite the existence of security coordination between Israel and the Palestinian Authority, various operations are taking place. However, the Israeli security circles are not voicing deep concerns about such operations because they are not continuous. They are, however, concerned about the whims of settlers,” he added.

He also pointed out that there are many reasons in the West Bank that could lead to a confrontation with the Palestinians, especially considering that Israel does not have a political vision for the future but is rather betting on the current situation.

Nahas said that “Israel is present at the security level in the West Bank as it carries out daily operations, and it does not want to control the West Bank as long as the PA is there, but its real concerns are over the fate of President Abu Mazen, and the visits of Israeli officials to the PA come in this context to try to coordinate about the post-Abu Mazen era.”

The West Bank lies on the crater of a volcano that could erupt at any time across the Palestinian territories. Attacks on male and female prisoners are ongoing, as happened on Dec. 19, amid increasingly ferocious settlers’ attacks in the West Bank, continuous settlement and demolition projects, and direct Israeli firing at stone-throwers. These are all reasons that may prompt the Palestinian factions to launch new operations in the West Bank — ones in which Gaza will not hesitate to take part.