The municipal government of Turkey’s largest city is run by the Republican People’s Party, which stands in opposition to President Recep Tayyip Erdogan. 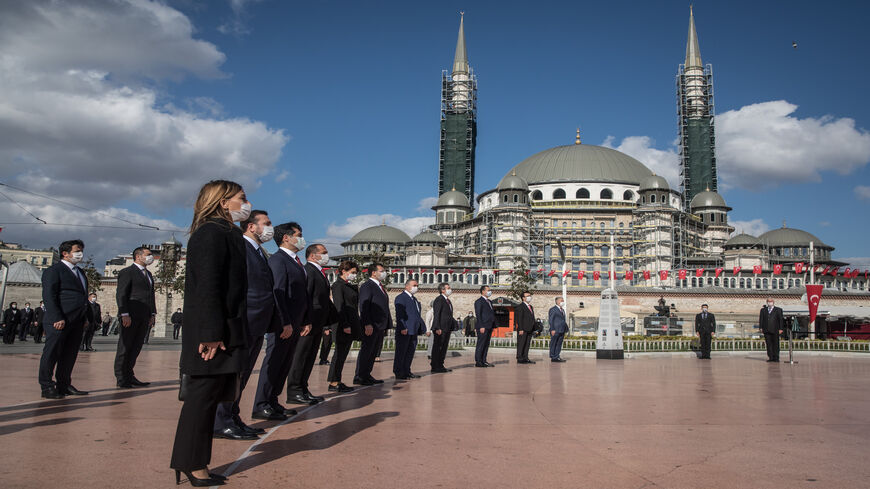 Istanbul Mayor Ekrem Imamoglu (6th-L) attends a ceremony at Taksim Square to mark the National Sovereignty and Children’s Day holiday on the first day of a four-day lockdown due to the coronavirus pandemic, Istanbul, Turkey, April 23, 2020. -

The probe involves 557 employees of the Istanbul Metropolitan Municipality, which governs the city of Istanbul. The employees are accused of connections to designated terrorist groups in Turkey. The list includes the Kurdistan Workers Party (PKK), which fights for greater rights for Turkey’s Kurdish minority, and the far-left Revolutionary People's Liberation Party/Front (DHKP/C), according to a ministry statement.

The Istanbul Metropolitan Municipality is led by the Republican People’s Party (CHP), which is the main opposition party in Turkey. CHP candidate Ekrem Imamoglu was elected mayor in 2019 in a controversial do-over election. His victory ended the dominance of President Recep Tayyip Erdogan’s Justice and Development Party in the city.

Turkey and the PKK have been engaged in an on-and-off conflict for decades. The Turkish military conducted a drone attack against a PKK affiliate in Iraq earlier this month.

There is a long precedent of Turkish authorities using supposed PKK links to target opposition parties. In recent years, thousands of members of the Peoples’ Democratic Party (HDP) have been arrested for alleged ties to the PKK. The HDP campaigns for Kurdish rights in Turkey, but denies any connection to the PKK.

The DHKP/C is a smaller group that adheres to a Marxist-Leninist ideology. Turkish police arrested tens of alleged DHKP/C members earlier this month throughout the country, including in Istanbul.