Yemen’s war is heating up again with new Saudi airstrikes in Sanaa, Marib and Hodeida. 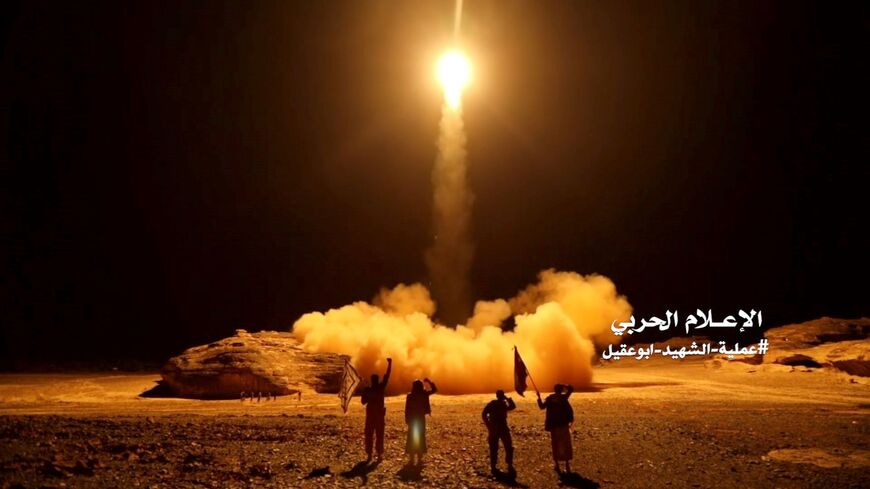 An image grab taken from a video handed out by Yemen's Huthi rebels on March 27, 2018, shows what appears to be Huthi military forces launching a ballistic missile on March 25, reportedly from the capital Sanaa. - AFP via Getty Images

Saudi Arabia on Monday night intercepted what its government said was a ballistic missile over its capital city amid Riyadh’s conflict with Iran-backed rebels in neighboring Yemen.

The Saudi-led military coalition against Yemen’s Houthis said Monday that it would retaliate for the missile launch “with an iron fist within the framework of international humanitarian law.”

The attempted attack on Riyadh comes as the Saudi-led coalition has ramped up its air campaign in Yemen as the Houthis threaten to take the Yemeni government’s final strongholds in the six-year conflict.

The US, which armed and supported the Riyadh-led military campaign to prop up Yemen’s government against the Houthi insurgents, has said it cut off support for offensive operations in the conflict under orders from President Joe Biden after he took office in January.

The US continues to provide defensive support to Saudi Arabia, however, which has faced a steady barrage of cross-border drone, missile and explosive boat attacks into its territory and waters.

The Saudi-led coalition said Sunday it had bombed Houthi military targets in the Yemeni capital as well as in Marib and Hodeida provinces.

Yemeni pro-government forces also seized a key highway linking Hodeida to Sanaa and launched an offensive on the western port city of Mocha, sources from both sides told the Associated Press. A Yemeni military spokesperson told AP their forces had made retaken “important and strategic positions” south of embattled oil-rich Marib.

The Biden administration has sought to end the war diplomatically, but the Houthis have ignored a ceasefire proposal put forth by Riyadh earlier this year, while demanding the coalition fully lift its blockade of Yemen’s ports and government-held airport.

The conflict began with a Houthi uprising in 2014 and has been called the world’s worst humanitarian crisis by the United Nations. Iran has offered weapons and training to Houthi officials, despite ongoing talks with leaders from rival states in the Gulf.