The United Nations said a grain port was bombed in Salif and six workers were wounded. 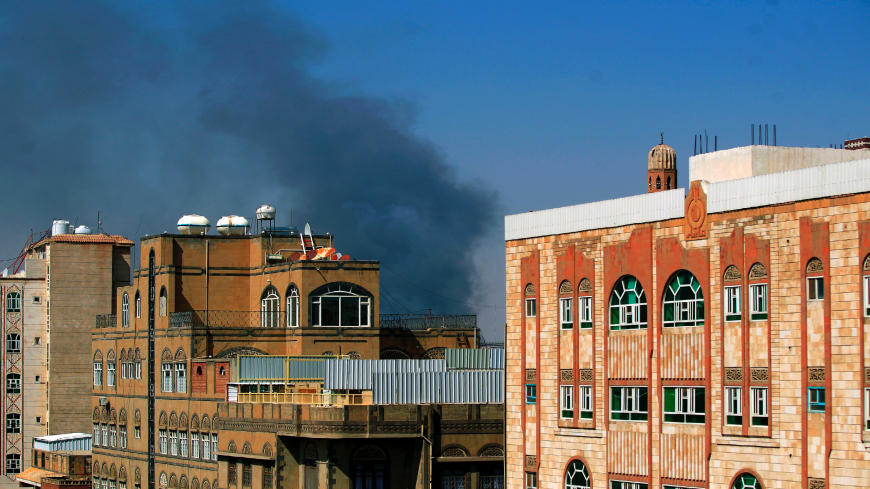 Smoke billows following a reported airstrike by the Saudi-led coalition in the Yemeni capital, Sanaa, on March 7, 2021. The Saudi-led military coalition mounted airstrikes on Yemen's Houthi-controlled capital after it intercepted 10 drones launched by the Iran-backed rebels, state media reported. "The military operation targets Houthi military capabilities in Sanaa and a number of other provinces," the coalition was quoted as saying by the official Saudi Press Agency. - MOHAMMED HUWAIS/AFP via Getty Images

The military coalition led by Saudi Arabia conducted dozens of airstrikes in Yemen’s north against Houthi rebels, including in Sanaa, the capital.

The coalition conducted airstrikes against a suspected missile assembly facility, a military engineering camp and the headquarters of the Houthis’ national security body in Sanaa, the coalition and a Yemeni pro-government spokesperson and local residents told Reuters on Monday.

Targets were also struck on Yemen's Red Sea coast and near the port at Salif, where coalition planes bombed a grain port north of Hodeidah, according to the United Nations.

The Saudi-led coalition renewed airstrikes earlier this month on Sanaa in response to a series of drone and missile attacks by the Houthis into Saudi Arabia. It was the first time Riyadh-led forces had targeted Sanaa since US President Joe Biden announced an end to US support for offensive coalition operations in Yemen.

Sanaa has largely been spared from airstrikes since 2019 when the Saudi government began talks with the Houthi rebels.

Riyadh, the United Arab Emirates and other regional governments have sought to prop up the Yemeni government of President Abed Rabbo Mansour Hadi since the Houthi rebels unseated him by capturing Sanaa in 2014.

The Biden administration has sought to end the conflict with diplomacy, but US envoy Timothy Lenderking said the Houthis rejected the US and Saudi proposals.

The Iran-backed rebels are pressing an offensive for the gas- and oil-rich city of Marib, a final enclave of pro-government forces.

Additional airstrikes were also reported near Marib by pro-Houthi media.

Last week, the coalition said it intercepted additional ballistic missiles and suicide drones over the kingdom in the latest string of Houthi attacks. The Houthis claimed to have struck a Saudi Aramco refinery, sparking fears of potentially significant damage to oil production. The attack caused a fire that was quickly extinguished, Saudi authorities said.

US and Saudi officials have accused the Houthis of carrying out the attacks with Iran-supplied weapons.

The Houthis have demanded an end to Saudi-led coalition strikes in Yemen as a condition to halt their own attacks.

The United Nations has described Yemen’s civil war as the world’s worst humanitarian catastrophe. More than 100,000 people have died and some 80% of the country’s population — roughly 24 million people — need humanitarian assistance.