The Russian movie "Sky" tells the story of a pilot killed after a Turkish jet shot down his bomber over northern Syria. 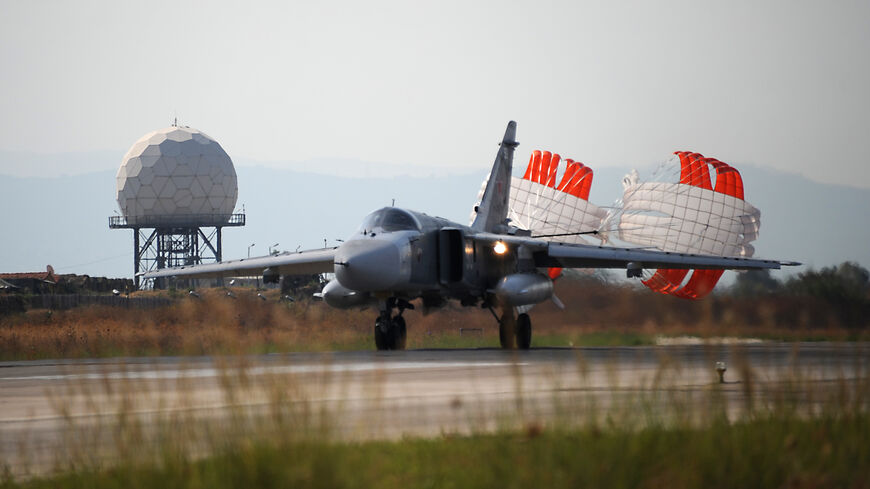 A Russian Sukhoi Su-35 fighter lands at the Russian military base of Hmeimim, located southeast of the city of Latakia in Hmeimim, Latakia governorate, Syria, on Sept. 26, 2019. - MAXIME POPOV/AFP via Getty Images

A new Russian movie tells the story of Russian pilot Lieut. Col. Oleg Anatolyevich Peshkov. "Sky" was recently screened in the Syrian city of Aleppo. Peshkov was killed when his fighter jet was hit by a Turkish Air Force missile and crashed in northern Syria six years ago.

The movie was first shown at the Hmeimim military base on the anniversary of the pilot’s killing. In Aleppo, an audience of Russian soldiers and some Russian nationals watched the film in a free screening. Peshkov was the first Russian pilot to be killed in Syria, since Russia’s military intervention alongside the Syrian government in late September 2015. The premiere took place on Nov. 21 at a movie theater in Yekaterinburg.

"Sky" was directed by the Russian director Igor Kopylov and produced by Trix Media Film Company in cooperation with the Russian Ministry of Defense and with participation by the Russia-1 TV channel. Actor Igor Petrenko plays Peshkov and Ivan Batarev appears as Capt. Konstantin Murakhtin, the navigator. Sergey Gubanov plays Maj. Vadim Zakharov, a Russian special operations soldier. Scenes were shot in Crimea in late 2020 as well as at the actual military facilities in Syria and Russia, including the Russian national defense center, the Lipetsk fighter pilot school and the Hmeimim military in Syria.

Inessa Yurchenko, producer of Trix Media, said at a press conference in Russia that "Sky" is the first film to tell the story of the Russian military operations in Syria.

Syrian journalist and film director Yasser Badawi told Al-Monitor that while he has not watched the film, “The trailer can tell us that Russia’s goal in making the movie, which is the most powerful art form for propaganda, is to portray its troops in Syria as heroes and their humanitarian mission as a fight against terrorism. Obviously, that is not true. The slain pilot was flying a sophisticated warplane to target hospitals and schools and to kill thousands of children and women.” The audience was restricted to sympathizers, he pointed out, to fan support among fighters and their families.

He added that the film depicts the pilot's violent mission as noble, saying, “It sets a dangerous precedent and motivates directors and production companies to work on such films.”

A few months ago another Russian film, "Palmyra," told a Dagestan doctor whose daughter falls for a terrorist group’s propaganda and moves to Syria. He embarks on a journey to save her.The director, Ivan Bolotnikov, told Sputnik that the moral of the story is that saving the world begins with saving one man.

Mohammed al-Sukari, a researcher at the Istanbul-based Jusoor Center for Studies, told Al-Monitor, “Russia is doing everything it can to support its discourse and policy in Syria by distorting the main goals that prompted Russia to intervene in Syria. It makes sense for Moscow to have translated the film into Arabic to gain the trust of some of the Syrian people in order to shore up its influence, particularly since its role has changed and it is playing mediator in southern and northeastern Syria. It also hopes that this film will contribute to improving its image internationally as a country that supports human rights and defends international stability.”

The Russian Sukhoi Su-24M aircraft was shot down by a Turkish fighter jet on Nov. 24, 2015, in northern Syria, and its pilot and navigator parachuted to the ground. Peshkov was shot dead immediately by the opposition factions. The other pilot survived and Russian special forces later rescued him and took him to Hmeimim.

In late November 2018, a Russian court convicted nine Syrians in absentia of killing Peshkov. A commemorative plaque in his honor was installed at the Hmeimim base in late 2020 and a statue of the pilot was erected in February 2021.